Peace for a day: How soccer brought a brief truce to World War I on Christmas Day 1914 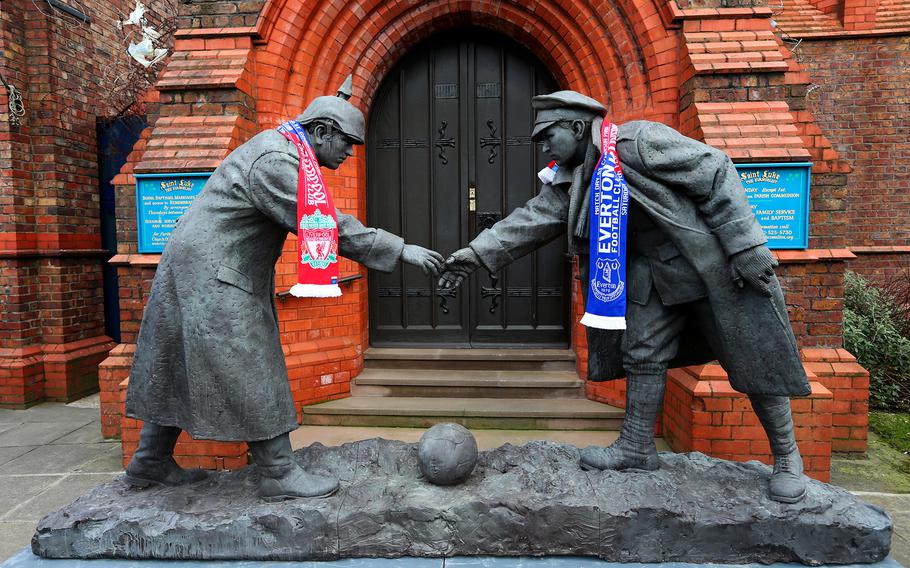 In this photo from Feb. 7, 2015, Liverpool and Everton scarves adorn a Christmas Truce statue outside a church near the stadium before the Barclays Premier League match between Everton and Liverpool at Goodison Park in Liverpool, England. (Clive Brunskill, Getty Images/TNS)

LOS ANGELES (Tribune News Service) — The first Christmas of World War I was a hellish time for Alfred Dougan Chater, a second lieutenant in the 2nd Battalion Gordon Highlanders, who woke that morning in a freezing, muddy trench less than 100 yards from the German lines in West Flanders, Belgium.

It was 1914 and the bloodiest fighting of the still-young conflict had ended in a stalemate. Corpses littered the deadly “No Man’s Land” separating the two sides along the Western Front, where hope had long since given way to despair and disillusionment.

So what Chater saw next, he wrote his mother, was “one of the most extraordinary sights that anyone has ever seen.”

All along a 20-mile stretch of the Western front, unarmed German troops began climbing over the parapets and walking toward the British side simply to shake hands and exchange greetings, the first tentative steps toward what is likely the largest spontaneous Christmas truce in modern history, one in which the warring armies shared cigars, good cheer, chocolate and, in more than one place, a game of soccer.

“It absolutely did happen,” said Terri Blom Crocker, author of “The Christmas Truce,” among the most authoritative books on the subject. Some of the men, she said, came out “the night before, some the morning of, some the afternoon of Christmas. Nobody pre-arranged anything.”

The truce, Crocker said, ranged from soldiers shouting across the pockmarked battlefield pledging not to shoot if the other side promised the same to “full-fledged let’s go out and fraternize and maybe even play a little football.”

More than a century later the truce and its spontaneous example of humanity and decency in the darkest of times continue to inspire, which is why the incident remains a subject of both study and curiosity. Failed, cowardly leadership had brought the world to war, but a simple child’s game brought the two sides to peace — for a few hours at least.

In one of a series of interviews the Imperial War Museum conducted with veterans long after the conflict, Ernie Williams, a 19-year-old private with the 6th Battalion Cheshire Regiment, said he was near Ypres, on the northern end of the front, when “from somewhere, somehow, this football appeared.”

He continued the story with Peter Hart for his book “Fire and Movement: The British Expeditionary Force and the Campaign of 1914.”

“They took their coats off, some of them, and put them down as goalposts,” he said of the Germans. “There would be at least a couple of hundred taking part.

“No referee; we didn’t need a referee for that kind of game. It was like playing as a kid in the streets, kicking the ball about and the referee being the policeman and chasing you off. There was no score, no tally at all — it was simply a melee.”

Hours before, men on both sides had been trying to kill one another. But when the football came out, Williams said, “everybody seemed to be enjoying themselves. There was no sort of ill will.”

At another spot along the front, a group of Scottish soldiers marked a goal with their hats and played against the Germans with “huge enthusiasm,” until a German officer found out about the game and put a stop to it with the Germans leading 3-2.

Temporary cease-fires have been a part of war dating back to the Roman Empire. They are frequently arranged to allow each side to collect the dead and wounded littering the battlefield or to allow the exhausted armies to rest and recover. The impromptu truce of 1914 — truces, actually, since they involved thousands of soldiers up and down the line with no coordination — that briefly halted the fighting five months into World War I had all of that.

“For many men the truce was, in the moment, nothing more than a welcome break from the grind and abject misery of trench life and constantly living under mortal threat,” Mike Hill, author of recently released “Christmas Truce by the Men Who Took Part: Letters From the 1914 Ceasefire on the Western Front,” wrote in an email interview. “The truce was a much-desired chance to gather in the dead bodies of their friends, which had been just out of reach, in some cases for months, and must have been a pretty grim sight to live with.”

The 1914 truces were also unique in that many took place without the knowledge or permission of commanding officers. Also because they featured soccer.

“The football games are really what attracted everyone’s attention,” Crocker said. “There’s really a big thing made out of them.”

So much so that the English supermarket chain Sainsbury’s aired a smartly made and emotional 3-minute, 20-second holiday commercial timed to commemorate the 100th anniversary of the truce.

Officers on both sides opposed the fraternization, which is why some contemporary histories of the war downplayed or ignored the magnitude of the event. British commanders threatened to discipline some who participated, fearing it would rob soldiers of their will to fight. On the German side, Crocker said an Austrian-born corporal refused to leave his spot in the trenches, believing the truce to be disgraceful. His name was Adolf Hitler.

But letters the men wrote home, many of which were published in local newspapers and later collected in museum archives, speak in glowing terms about the truce. However, there were far fewer references to soccer.

“There is very little first-hand evidence of organized games taking place in the form we would recognize as a match, i.e. even sides, referee, rules, laid-out goals, etc.,” said Hill, whose book claims to be the largest collection of letters from the front during World War I. “There are a lot of references to more impromptu kickabouts. There is also a lot of discussion about the possibility of having games, conversation between enemies about professional football back in Britain — a significant number of Germans had lived in the UK prior to the war — and also reports of games taking place on Christmas Day between British regiments behind the lines.”

Soccer was also used as a morale-booster and recruitment tool on both sides, so the sport was hardly a stranger to the troops. Moreover, FIFA, the world governing body for international soccer, had been created just a decade earlier and the German and English national teams had played one another four times in the six years preceding the war, with England winning three times and the other match ending in a draw.

As a result, the idea of soccer as a vessel for nationalist expression had already been established, so it’s not hard to imagine the game serving the same role during a tentative truce.

“Football was very popular at the time in both countries and then, as now, would have been a default conversation between strangers, so it is no surprise it should have come up as something to talk about, and the next logical step is having a game,” Hill said. “If nothing else, it would underline their new-found camaraderie.”

One firsthand account of a game, from Cpl. Albert Wyatt of the Norfolk Regiment, is featured in Hill’s book.

“Everybody on each side walked out to the middle of the two firing lines and shaking hands wished each other a Merry Christmas,” Wyatt writes in a letter home. “To our surprise we found we were fighting men old enough to be our fathers, and they told us they had had enough of the war, as they were nearly all married men.

“We finished up in the same old way, kicking a football about between the two firing lines. So football in the firing line between the British and Germans is the truth, as I was one that played.”

British officer Peter Jackson, in an interview with the Imperial War Museum nearly a half-century after the conflict, also clearly remembered a Christmas Eve game.

“Somebody from the trench punted across a short football [that] landed amongst the Germans and they immediately kicked it back amongst our men,” he said. “I spoke to the German officer and suggested that we ha[ve] a football match. After a while he relented, and the football match began. ...

“They were kicking the ball backwards and forwards to the trenches, to the barbed wire, for quite half an hour, until unfortunately the ball got impaled on one of the stakes of the barbed wire and was deflated.”

That sports could become a substitute for war shouldn’t be surprising since generals rely on many of the same attributes coaches do, among them teamwork, camaraderie and discipline. During the Contra War in Nicaragua in the 1980s, a Sandinista patrol reportedly came across a small group of anti-government rebels, and with neither side willing to violate the delicate cease-fire then in place, they decided to settle their differences with a baseball game in a nearby pasture.

That the story is almost certainly apocryphal does little to diminish its message: play ball, not war. It’s also why Crocker finds the lessons of the Christmas Truce still relevant 107 years later, in a country riven not by war but by political and social divisions.

“We’re so divided by everything. We can’t talk to each other. We have these two very disparate sides of America,” she said. “Imagine they were fighting and they’re still able to say, ‘You guys are people and we’re going to go out and hang with you for the afternoon.’

“That’s what’s wonderful about the truce. It’s not because they were rejecting the war. Everybody out there in the trenches still thought the war was worth fighting. They were out there because they recognized their enemies as people.”