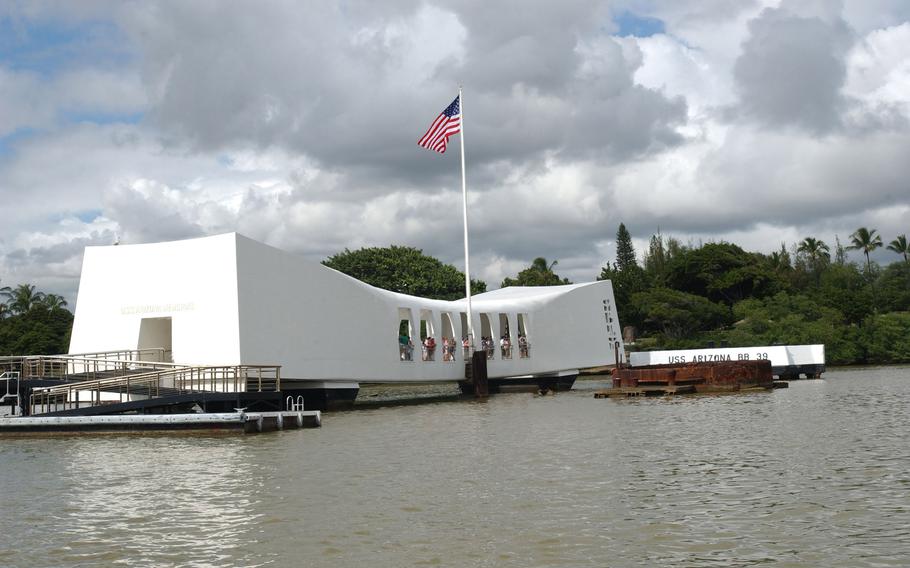 TUCSON, Ariz. — When the USS Arizona exploded and sank during the Japanese attack on Pearl Harbor 80 years ago, brothers died with brothers, childhood friends with childhood friends, a father with his son.

Some of the men were seasoned sailors. Many were teenagers, including several who lied about their age at enlistment because they were too young to serve.

Now profiles of all 1,177 sailors and Marines have been compiled for the first time by a Tucson woman who spent more than five years researching their stories.

Her work began in May 2016 with Joseph John Borovich, a 22-year-old seaman first class from Central California who was rejected by the Navy because of blurred vision but kept coming back to the recruiting depot until they took him in July 1940.

Buel finished the last profile three months ago, stitched together with Navy records and census reports.

Buel was in talks earlier this year to make all of the stories available through an easily searchable smartphone app so visitors to the USS Arizona Mall Memorial could stand in the outline of the ship and read about the men whose names are engraved on bronze medallions just east of Old Main on the University of Arizona campus.

That agreement recently fell through so she has been reposting the stories on social media — one every 30 minutes — while she looks for another permanent home for them.

By Dec. 14, all 1,177 profiles should be available on the USS Arizona Mall Memorial's Facebook page.

These guys deserve to have their stories told, Buel said.

Even before the attack, a surprising number of Arizona crewmen were already bonded by blood or history.

Of the 1,514 men assigned to the ship, Buel estimates close to 200 had relatives or friends from back home on board with them.

According to the National Park Service, caretaker of the USS Arizona Memorial at Pearl Harbor, Machinist Mate First Class Thomas Augusta Free, 50, and his son, Seaman Second Class William Thomas Free, 17, both died on the ship, as did 23 sets of brothers.

Buel said the list of casualties also includes cousins, uncles, nephews and best friends, many of whom enlisted, served and then died together.

A story that sticks with her more than most involves four teenagers who enlisted together at a Navy recruiting office in Detroit on a snowy day in November 1940. One of the boys, Chester John Miller, was just 15 at the time, but he was allowed to sign up anyway.

Miller and Lipke, both firemen second class, died on the Arizona. King, on the battleship Nevada, and McClelland, on the light cruiser Helena, survived the attack, though McClelland was hurled in the air by a torpedo blast and broke his leg.

McClelland was still aboard the Helena when it was sunk in the South Pacific in July 1943. His life raft carried him to an island held by the Japanese, where the locals hid him and his crewmates for a week until they were picked up by Navy destroyers.

Buel added details about the men to spreadsheets as she went, so she could better understand not just the individuals but the collective story they told as a crew.

She said nearly a quarter of the men lost one or both parents before the age of 18. At least 6% saw their parents divorced — a figure almost certainly underreported but still three times the national rate in 1940.

Buel also tracked the size of the communities the crew members came from. She said as many as half of them grew up on farms or in towns with populations of less than 1,514.

"Five thousand people (in all of Greene County, Illinois), and you just lost four guys. And that was day one of the war," Buel said.

Seaman Second Class James Randolf Van Horn was the only Tucsonan lost on the battleship that day.

The 17-year-old had never seen the ocean before, but he dropped out of Tucson High School to join the Navy. He requested the Arizona because it represented his home state.

In a 1958 interview, Van Horn's mother Bonnie Cope said her son decided to enlist after attending a recruiting talk at Tucson High by Rear Admiral Isaac Kidd in the spring of 1941.

Kidd later died on the Arizona along with the Tucson teenager he inspired to join him there.

The research project began as a companion piece for the USS Arizona Mall Memorial which Buel's husband, David Carter, designed at the UA.

At the time, Buel figured someone had already compiled the men's stories. She just needed to find whoever did the work and get permission to share it.

She planned to spend the first two weeks of her retirement from the Star pulling the information together so it would be ready to go when the memorial was dedicated a few days before the 75th anniversary of the Pearl Harbor attack.

Then she discovered that there was no existing collection. At least some of the sailors and Marines had never been profiled before. Their names were etched in marble at the USS Arizona Memorial in Hawaii, but their histories had gone untold.

Buel would have to do it herself.

The search took her and her husband to major cities and tiny towns to scan reels of microfilm or comb through bound copies of old newspapers in search of obituaries. She couldn't just page through the December 1941 editions, either. Some families weren't notified that their loved ones were dead until months later.