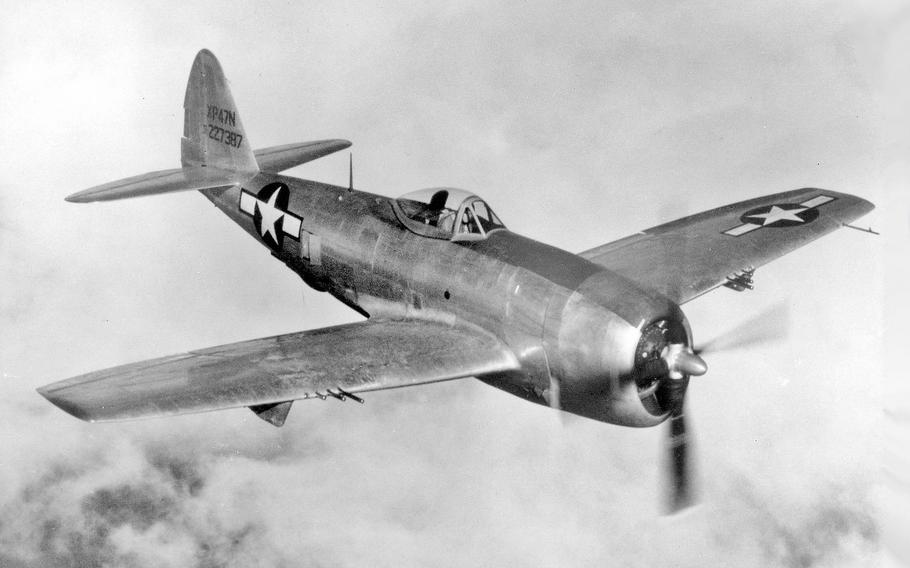 Used as both a high-altitude escort fighter and a low-level fighter-bomber, the P-47 quickly gained a reputation for ruggedness. (U.S. Air Force)

Twenty-five minutes later, the 22-year-old airman disappeared from the sky without a trace and was eventually declared killed in action over the Ligurian Sea.

Now, an Italian aeronautic researcher who has spent the past 19 months conducting interviews and collecting historical and family information has completed a report on what he believes happened to Lawson that cloudy December morning, and where he believes Lawson’s plane — along with the flyer’s remains — now rests on the seabed, just off the coast of La Spezia, Italy.

Claudio Mischi, 60, of Mantua, Italy, said he’s confident in the accuracy of his research about Lawson and the flyer’s final mission, but he’s not nearly satisfied.

“Not finding the wreck of that plane was a great disappointment for me,” Mischi said in an email interview. “Inside the cockpit of the plane there may be some human remains belonging to Elwood Lawson, whose body has never been found. It was my intention to take home what’s left of the boy, if he really is down there. But, often, not everything works the way you want it to.”

But even if Mischi was not able to find Lawson’s plane, getting a copy of Mischi’s 44-page report has been a nice chapter-closer for Ben Georgeson, 62, whose late father was Lawson’s cousin.

Growing up in the Fresno-area town of Kermin, Georgeson said he idolized Lawson, who was known to his family as “Billy,” but among his flying buddies as “Woody.” When Georgeson grew up, he followed in Lawson’s footsteps and became a pilot in the California Air National Guard. After befriending some of Lawson’s fellow flyers years later, Georgeson was inducted as an honorary member of Lawson’s 345th Squadron, known as the Devil Hawks. One of Lawson’s best friends in the squadron was Lloyd Martin, who was shot down over Belgium and taken prisoner. He died in 2011.

“Lloyd said Woody was a fun guy who was always right in the middle of everything,” said Georgeson, 62, in a recent phone interview. “Lloyd wasn’t flying that day but he said ‘the worst day of the war was the day Woody went missing. The second worst day was when I got shot down and became a POW.’ It was a tragic thing but that’s part of the deal. You never know when your number is going to be up.”

For the past 20 years, Mischi has been researching World War II aircraft and writing about Allied pilots who died in air battles over Northern Italy during World War II. Mischi spent 43 years as a metalworker before retiring in 2018. Since then, he has has dedicated himself full time to research. His writing has been published in a book, historical articles and on WWII-related websites. He has researched and written the stories of more than 100 air crashes. A major area of his interest has been telling the stories of the aviators of about 80 planes shot down in 1944 and 1945 in Northern Italy’s Po Valley, where he lives. Mischi said he learned about Lawson’s disappearance in May 2020 while reading an unclassified missing air crew report about the 1944 incident. Four P-47s left Pisa that morning at 9:30 a.m. with the goal of dropping incendiary bombs on a German anti-aircraft battery dug into a seaside cliff at Punta Bianca, which is between two small towns in the province of La Spezia, about 50 miles north of Pisa.

According to the Army report and Mischi’s research, the four planes traveling north in a line encountered heavy fire from German guns and broke off their bombing run by turning over the sea to head back. The lead pilot testified that by the time his plane emerged from the clouds, the third and fourth planes in their formation were missing and they never returned to base. In the third plane was Lt. Robert G. Johnson, whose body was later recovered and buried near Florence, Italy. Lawson is believed to have gone down with his plane in the sea.

Lawson was a junior pilot on only his 13th mission that day. Besides his inexperience, he was in the most dangerous position, flying fourth in the formation.

“The guys in No. 1 and 2 were more experienced than Billy and Johnson. The lead pilot led the way in, he might have been there a lot of times. The further back in the formation you are, the more time they have to train their guns on you. ‘Tail-end Charlie’ is the worst place to be,” Georgeson said.

According to Georgeson and another descendant, Glenda Lawson, Elwood “Billy” Lawson was born in Escondido on Dec. 7, 1922, to parents William Lawson and Bertha Mae Cozell, who separated when he was 5 years old. For a few years, Billy and his younger brother, William, lived with Georgeson’s grandmother, Mae, in Imperial County before returning to Escondido by 1930 to live with their father and new stepmother. He graduated from Escondido High School in 1941 and in June 1942 joined the Army. After more than two years of flight training in the U.S., he shipped overseas to Italy.

He had only been stationed at Pisa about a month when he took off on that fateful mission. About a year after his plane disappeared, the Army finally declared him dead.

Georgeson said that before Billy shipped out in 1944, he assured Mae Georgeson, who he called “Gran,” that he would return. Even if he was declared missing, Lawson told Gran he would use his survival skills to make his way home eventually. Georgeson said it was a promise she clung to until the 1980s when she received Lawson’s Purple Heart and Air Medals in the mail.

When she finally got the bag with the medals she said, ‘Oh Billy, you’re never coming home, are you?’ “

During his research last year on the disappearance of the two P-47 planes, Mischi made a breakthrough when he tracked down Turiddo Marciasini, 86, who was an eyewitness to the 1944 incident. On that morning, the 10-year-old Turiddo was in a piazza at Castelnuovo Magra with his aunt, a few miles northeast of the coastline, when he saw four Allied planes fly over the German gun battery and he heard gunfire. He saw the planes quickly turn toward the sea, the last two trailing smoke and flames. Then he saw those planes descend and drop quickly below the edge of the coastline, southwest of the local landmark known as the Fiat Tower in Marina di Massa.

Mischi interviewed fishermen in the area who keep detailed maps of the seabed to avoid entangling their trawling nets with underwater obstacles such as wrecked planes and boats. Based on accounts from Marciasini and elderly local fishermen, a World War II plane is believed to be located at that location, about 7 kilometers off the coast at a depth of 15 to 16 meters. An initial search by volunteer divers earlier this year yielded nothing, but Mischi said professional divers or U.S. Defense Department recovery teams may have better luck. Anyone who can help in the search for Lawson’s plane can email Mischi at claudiomischi@virgilio.it.

Mischi said there are still thousands of missing U.S. Army Air Force aviators from World War II. Meeting the families of these flyers and telling their stories has been one of the most rewarding experiences of his life.

“It is always a great responsibility to hand over these events of many years ago to history. Stories of life and death, of suffering, unknown or forgotten stories — I think I couldn’t do better than that,” he said. “I am not finished yet. I will never stop finding new planes and new stories to tell.”