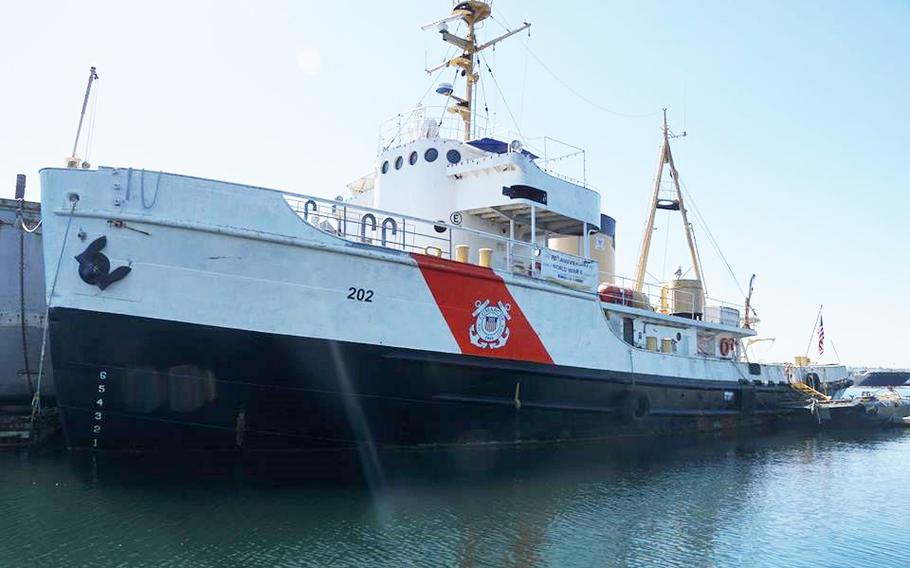 TACOMA, Wash. (Tribune News Service) — Three years and a day after the Japanese attack on Pearl Harbor, a Navy tug was commissioned to help with the U.S. war effort in the Pacific. The country needed all the ships it could make in 1944, including stout ships like the ATA-202.

The date, Dec. 7, was chosen for its historical significance to mark the start of a new nonprofit dedicated to the restoration of the Comanche and the creation of an on-board education program for youth focusing on ecology, Coast Guard missions and, on occasion, music.

The group, called the ATA 202 Foundation, is spearheaded by Jesse Schwartz, a biology and ecology instructor at Green River College. It replaces the former nonprofit that until recently oversaw the restoration of the ship.

The waters around the Port of Tacoma don't have a bright history when it comes to ship restoration. In 2015 and after a decade moored on the Hylebos waterway, the iconic Puget Sound ferry Kalakala was torn apart, along with the last remaining dreams of its restoration.

The ATA 202 Foundation has some distinct advantages over the groups which vainly tried to save the art deco ferry.

First, the Comanche is operational.

"It is, despite in being in need of restoration, a completely mission capable ready vessel," Schwartz said. The ship has its original two engines.

"You could flood the engine room and it still won't sink," he said.

The new group has ambitious plans. It wants to make the Comanche the environmental flagship of Puget Sound.

Schwartz and his core group of volunteers have experience in restoring historic ships, including the Modoc, the sister ship of the Comanche. The Modoc now serves as the base of operations for Kiwi conservationist Pete Bethune's Earthrace Conservation.

Ask Schwartz what drives his passion for Comanche, and you might get a mini lecture about catching crabs as a kid, his background in science and the degradation of natural fisheries. The project reflects his passions for ecology, particularly fisheries conservation, as well as history.

By summer 2022, Schwartz hopes the ship will be able to take its first sail with participating youth. Eventually, along with conservation topics, they will learn about the non-homeland security missions of the Coast Guard: safety, search and rescue, fisheries enforcement, pollution monitoring, among others.

Schwartz hopes the Comanche will act as another set of eyes and ears while at sea although it has no official affiliation with the Coast Guard. The most anyone on board will do is make a call to report any violations observed, he said.

The group effort has attracted a core group of 20 volunteers, including an all-female engine room crew.

Volunteer and Boy Scout Connor Hazel, 18, recently installed a new fantail deck on the ship's stern — it was a project to earn his Eagle Scout rank.

A full restoration, along with operating costs, adds up to millions, Schwartz said. Funding will come from grants and donations.

Comanche operated as a cutter along the West Coast and Texas from 1959 to 1969. It used Eureka, Calif., as its home port until it was decommissioned in 1980. After a decade in commercial service in Puget Sound, it was laid up in 2000.

Peterson had served on the Modoc while in the Coast Guard in the late 1960s. He had seen the Comanche working Puget Sound in the 1990s. He and his Coast Guard buddies kept track of it.

In 2006, the then-owner offered him the ship for free after a donation to a museum fell through. He declined.

But in 2007, Peterson took a trip on the boat. He was impressed by how much was still intact.

"I knew what it was supposed to look like," he said.

He agreed to take the boat and start a nonprofit group to restore it, the Comanche 202 Foundation.

"We got volunteers, a number of them who had been on either Comanche or Modoc," he said. "There was a lot of painting, a lot of cleaning, a lot of getting things in good repair."

Support ships like the Comanche are often forgotten and scrapped in favor of destroyers, aircraft carriers and other combat ships when it comes time to preserve history, he said.

On Tuesday, Peterson gave a tour of the boat after delivering a short lecture on Pearl Harbor. His Navy father fought in the battle.

Peterson has an intimate knowledge and fondness for the Comanche. He knows what every handle and cable operates and the history behind photos, uniforms and sleeping quarters.

"It can tow anything afloat," Peterson said.

It doesn't take much imagination to picture Navy and Coast Guard life on the ship.

A small kitchen, or galley, that fed the crew was in use Tuesday to make a large pot of clam chowder.

Officers had their own bathroom, or head, on the boat. Regular sailors all used another single toilet and single shower with only token privacy.

For a few years, the Comanche was tied up at a city-owned dock near the Foss Waterway Seaport, Peterson said. As of 2015, it has been moored at Tyee Marina where it serves to dampen waves that might otherwise damage moored boats.

COVID put a damper on ship restoration in 2020, and climbing the steep ladders on board wasn't getting any easier for the older volunteers.

"We decided that we're kind of done with it. We've gone as far as we can go," Peterson 77, said. It was time to turn it over to a new group.

"The first person I thought of was Jesse Schwartz," Peterson said.

Seattle musician Jim Page performed at Tuesday's event and plans on incorporating music into the foundation's programming. The longtime folk singer and street performer, 72, said he's been writing songs since he was 15.

"I've learned how songs work in the world to express ideas that encourage people to do certain things," Page said.

It might be unusual to have music in a program that focuses on ecology and Coast Guard history. But, not for Page.

"Music doesn't exist in a vacuum, and it should not behave like it does," Page said.

"There's never been a ship without a sea shanty on it," Schwartz added.