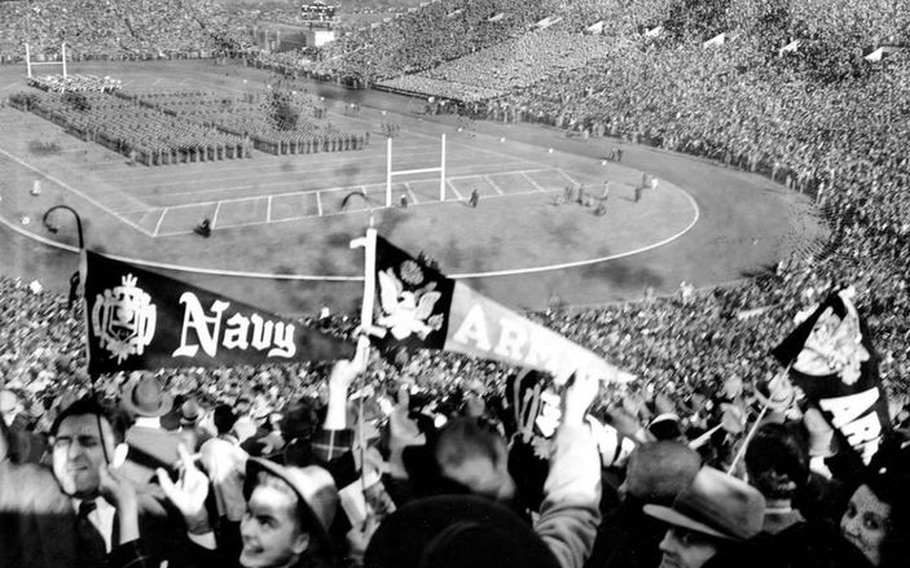 PHILADELPHIA (Tribune News Service) Eighty years ago, amid the traditional pomp and pageantry, Army and Navy played football before a raucous crowd of 98,000 in Philadelphia. At the same time, a Japanese war fleet advanced toward Pearl Harbor where, eight days later, it would attack America.

In hindsight, it seems folly for the service academies to have engaged in that game on Nov. 29, 1941, with a real enemy bearing down. But to most Americans, the notion of a Japanese strike on a U.S. military base was inconceivable; moreover, the Army-Navy game eased the sense of foreboding that had hung over the nation for much of the year. Besides, the contest lay bare the mettle of the military, if only in sporting terms.

The athletes, Washington Post columnist Bob Considine wrote, would “symbolize for 60 tense minutes their fitness for a war that already has changed the country, though its licking flames have yet to scorch our shores. Beneath the collision of bone and muscle, [and] the phantasmagoria of color and sound, will run the deeper meaning of men preparing for grimmer things than the kicking of an insulated bladder.”

The 42nd game of the series had the U.S. president’s blessing.

“The right kind of national spirit of peace is necessary for the right conduct of the Army-Navy game,” Franklin Roosevelt said. “How many other countries in the world could have things like that going on?”

Fate would intervene. In a cruel irony, the souvenir football program featured a picture of the USS Arizona with the caption: “It is significant that ... no [American] battleship has yet been sunken by bombs.” On Dec. 7, the Arizona was sunk by the Japanese with the loss of 1,177 lives.

On game day — unusually warm and sunny — 41 special trains packed with fans from Baltimore, Washington and New York streamed into the city, along with 5,000 midshipmen and cadets who marched into Municipal Stadium to cheer their teams. First lady Eleanor Roosevelt arrived, flanked by two dozen FBI agents. Then came the Army mule and the Navy goat, Bill IX, who clambered out of a Jeep at midfield, accompanied by two Marines.

“There’s a bigger game coming up and I’m going to be in it,” Larson said. The news fired up his team even more.

Army (5-2-1) had a mercurial tailback in Hank Mazur and a new but soon-to-be legendary coach, Earl “Red” Blaik. Also, earlier that season, the Cadets had fought Notre Dame — the only team to beat Navy — to a scoreless tie.

Army scored first, on a 1-yard plunge, and led 6-0 at the half. Then Mrs. Roosevelt left her seat on the Army side of the field to sit behind Navy’s bench. The Midshipmen roared back with two late touchdowns, while holding the Cadets scoreless, to win, 14-6.

Navy fans rushed the field and tore down the goal posts, which were taken back to Annapolis. (A week earlier, as they razed the wooden posts after a win at Princeton, a fracas ensued, prompting the Navy band to play the national anthem, which forced the Midshipmen to stop the shenanigans and stand at attention.)

In the jubilant locker room, Larson was asked about Navy’s chances of receiving a bowl bid.

“About 25 of my boys graduate on Dec. 19,” the coach said. “By the time the bowl games come around, God knows in what land they’ll be.”

Of the day’s 22 starters, the war claimed the lives of three: Army end Tom Farrell and guard Willard Wilson, and Navy tackle Bill Chewning, a lieutenant whose submarine was sunk in the Pacific in 1943. Chewning, who’d been named to the 1941 AP All-Eastern first team, received a Purple Heart posthumously. At least eight other starters were decorated for their exploits, including Navy end Laars Wanggaard who, in 1942, dived off his ship in the Pacific to help rescue the survivors of a torpedoed cruiser.

Half a century later, 18 members of that Navy team gathered before a game in Annapolis to observe their 50th reunion in 1991. That year, the Midshipmen struggled, losing 10 in a row, but finished with a victory over Army. Little else mattered.