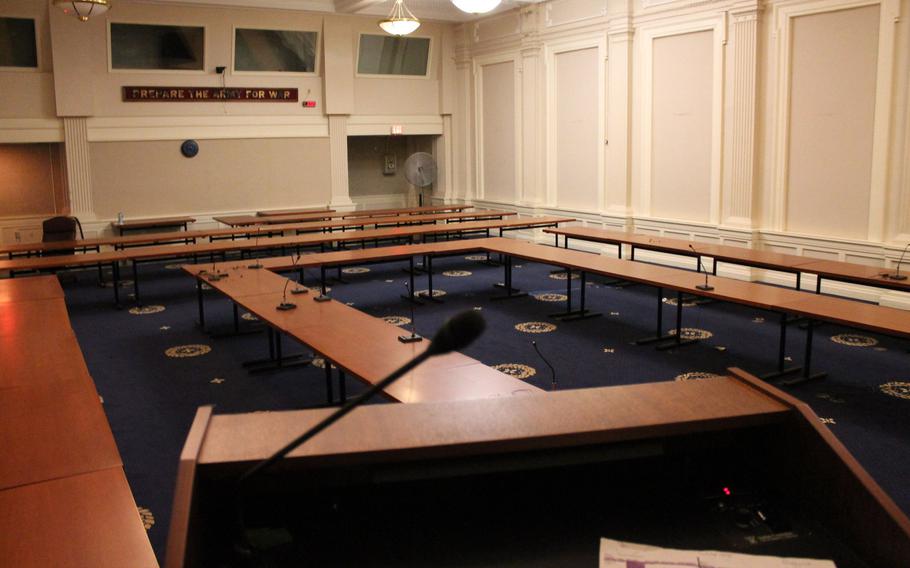 Conference tables and microphones are set up in a former Army briefing room in one of 14 buildings Fort Monroe leaders hope to redevelop. (Trevor Metcalfe, The Virginian-Pilot/TNS)

(Tribune News Service) — Fort Monroe leaders are plotting the next stage of development at the historic site — and they want local developers to lead the way.

The Fort Monroe Authority, which oversees the state’s property at the fort, is looking to redevelop around 300,000 square feet of building space at four sites. Fort leaders issued a request for development proposals on Nov. 17.

Glenn Oder, the fort authority’s executive director, said residents shouldn’t expect to see radical changes in how the area looks. Developers aren’t allowed to be disrespectful of the architecture or history of the buildings and must follow design guidelines, he said.

But Fort Leaders want to hear developers’ ideas, which is why leaders haven’t mandated any uses, he said. The request for proposals offers suggestions. For example, Murray Hall would most likely be residential, but the building “may support other uses including hospitality, officer or retail.”

The large ballroom with high ceilings in Murray Hall, where history is on full display, is an example of the unique challenge of developing a historic site, Oder said. The ballroom was converted into a briefing room for the Army Training and Doctrine Command, whose headquarters was at Fort Monroe for decades. Above the dozens of old microphones, conference tables and a large presentation screen is a large placard that reads “PREPARE THE ARMY FOR WAR.”

Murray Hall is one of several buildings located on a 4-acre property across from The Chamberlin senior community.

The four sites targeted for redevelopment sit on more than 11 acres of land and include 14 buildings. All but one building is historic. They include:

—A site near the front entrance with two buildings and 41,977 square feet of space.

—Two sites near the intersection of Ingalls Road and Patch Road — one with a single building and 25,911 square feet of space and another with three buildings totaling 85,000 square feet.

—The site across from The Chamberlain, with includes a six-building, 147,116-square-foot complex.

The sites were all most recently used by the Army, which occupied the location until 2011 when the fort was vacated as part of planned base closures. The property was then divided between the state and the National Park Service.

All but one of the buildings also qualify for both state and federal historic tax credit programs, according to the request for proposals. That means developers can receive tax credits for up to 45% of qualified renovation expenses — up to 20% under the federal program and 25% through the state.

This isn’t the first redevelopment undertaken by fort leaders. A Smithfield-based development firm plans to spend $40 million to turn the Old Point Comfort Marina into a 300-slip marina, a 90-room hotel, a conference center and a restaurant.

Oder said fort leaders aren’t proposing any use of public funding for development but didn’t rule out the possibility as part of negotiations between the authority and the developers.

The deadline for proposals is Feb. 1. After that, Oder will make recommendations to the authority’s board of trustees and its finance committee for approval. Then, he would finalize lease details with the state attorney general’s office.