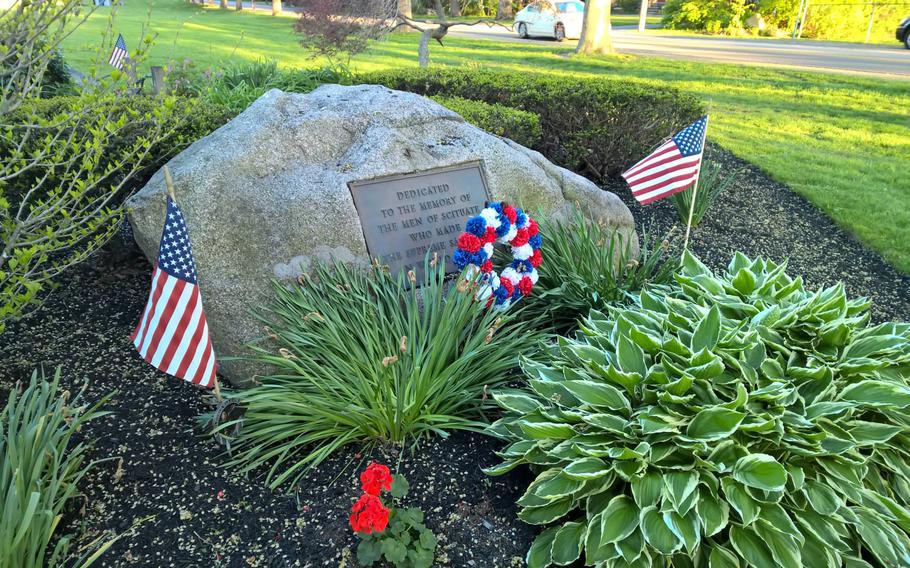 SCITUATE, Mass. (Tribune News Service) — Connie Marcotte and her husband were cleaning out her parents' Scituate house after her mother died when they discovered a tiny white box far back in the corner of the attic.

"I couldn't reach it, so my husband was able to go all the way in and get it," Marcotte said. "One of our parents, most likely our dad, crawled all the way in the knee wall and tucked it away back in 1985 when they moved to their new home. Neither one ever said a word regarding this little box and the treasure it held."

The treasure was love letters, photos and greeting cards that were sent between Marcotte's parents — Mel and Jane Atherton — while Mel was serving in the U.S. Army during World War II.

"The letters were of everyday life — accounts of what they had for dinner, mischief at the base, conversations with friends, our mom's pregnancy stories, and statements of their love for one another," Marcotte said.

She sent a picture of one of the letters to her three siblings and they all agreed to meet and discuss what the next step should be.

Mel and Jane's four children — Paula, Janet, Mel and Connie — donated six two-inch three-ring binders containing 350 letters, many photographs and cards, and a digital flash drive to the Scituate Historical Society on Nov. 20 — a day before what would have been Mel and Jane's 80th wedding anniversary.

"My parents loved the seaside town of Scituate," said Janet Atherton. "Our mother loved visiting the town in her youth, and after the war she convinced our father it was the place to raise their family."

The couple spent 60 years in Scituate.

"We moved to Scituate in 1954 in time for 'Hurricane Carol,'" said Paula Atherton Gnibus. "The old Greek Revival farmhouse they bought had no indoor plumbing, so that was an adventurous summer until our father remodeled."

According to Gnibus, Mel and Jane were involved in all aspects of town life.

"Mom was a reporter for the Scituate Herald, and later the correspondent for the Quincy Patriot Ledger," she said. "She taught Sunday school at the Unitarian church and was a volunteer for seniors needing a lift to Boston hospitals. But she was happiest as a docent for the Irish Mossing Museum where she did research and organized historical presentations and in her 80s, she wrote a book about what town life was like a hundred years ago called 'Celia and the Captain.'"

Mel, Gnibus said, was treasurer for the Boy Scouts, and was a volunteer for years for the Etrusco Association where he kept the equipment working.

"Both parents were drivers for Meals on Wheels for years," she added. "Their hearts were always in Scituate."

They are buried next to each other in the graveyard behind the First Congregational Church.

Melvin A. Atherton was born in August 1916 in Roxbury. Jane Helen Giblin was born in May 1918 in Boston. They met while both were working in the office of the Singer Sewing Machine Company in Boston.

"She was a receptionist, and he was a machinist specializing in sewing machine repair," Atherton said. "Their love of jazz, dancing and a good sense of humor was what attracted them to each other."

On Feb. 6, 1942, Mel was inducted into the U.S. Army at Camp Devens, and shortly after was sent to Camp Lee in Virginia. He was then sent to Camp Shelby in Michigan before being sent to Panama for 10 months.

After returning to Camp Shelby he was sent to Camp White in Oregon where he trained other soldiers and lectured on Army truck and machine repair, Atherton said.

"At this point, our mother traveled across the country with baby Paula, where our father would meet his daughter for the first time."

The family lived together for six months before Mel was sent to England on Nov. 23, 1943.

"He served in the 607 Quarter Master Company, landing in Normandy during the invasion, then on through the campaigns of Northern France, the Ardennes, Rhineland and Central Europe," Atherton said.

He was honorably discharged on Aug. 17, 1945, after three and a half years of service and returned to the Singer Sewing Machine Company. He was the sales representative for New England until he retired at 64. He had started working for the company when he was 16.

None of the Atherton siblings knew about the letters prior to the discovery in the attic.

They were kept secret, and moved by their mother from all the places she lived during and after the war — Boston, Nahant, Washington, D.C., Marshfield, Hingham, Weymouth, and finally to two different houses in Scituate, Atherton said.

"Our father was a quiet man who, like many men that served in WWII, never spoke about the war," she said, adding that despite that their mother was the reporter, it was their father who was the storyteller.

"In his beautifully written letters, he relates tales of humor as well as the poignant aspects of the terrible war he was in."

"The letters are an amazing personal reflection of the lives of a young married couple at a very unique time in our history," said Scituate Historical Society Trustee Martha Twigg.

"Letters were their main means of communication — think how long it took to deliver mail. The moving around for them both, and when Mr. Atherton was in Europe, the letters must be such a personal observation of the experiences of the war."

These letters are a record of their love, devotion and perseverance, qualities that would steel them together as a family, said Mel and Jane's son, Mel, in the dedication of the book of letters. "They shared everyday things — 'Pa got a cold,' 'Can you send me my camera,' 'Paula had a great time on the train to Oregon,' 'I made Staff Sergeant!' This was their lives, carefully written on paper, lovingly sent with a stamp, and then, patiently, they waited for news to be sent back."

For Atherton, the letters allow her and her siblings to witness the love between their parents in a new way.

"I feel I have learned so much more about who my father was, what he believed in and cherished after reading his own personal story of World War II," she said.

Twigg, whose father was in charge at a Medical Battalion unit in Germany during World War II, and who has letters between her parents that she has yet to read, hopes the Atherton siblings' adventure into their parents’ letters will inspire others to uncover similar fascinating stories from their families.

For more information on the Scituate Historical Society visit scituatehistoricalsociety.org.