Franklin Roosevelt moved Thanksgiving up a week to goose the economy, and chaos ensued 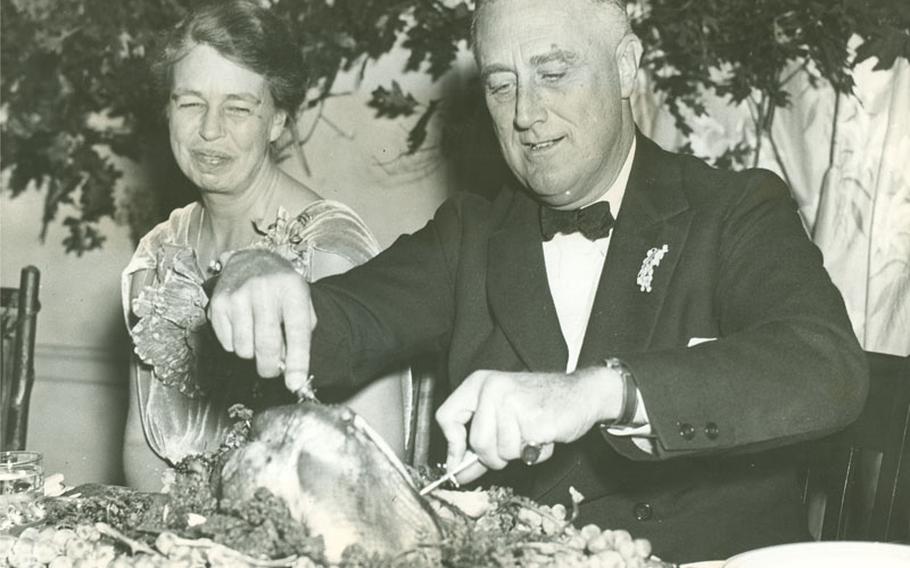 In 1939, half of America celebrated Thanksgiving, and the other half celebrated "Franksgiving."

To boost the economy, President Franklin D. Roosevelt moved Thanksgiving up a week to create an extra seven days of Christmas shopping. Talk about a New Deal.

Turkey Day traditionalists cried foul. "We heartily disapprove," said the chairman of the annual celebration commemorating the 1621 harvest feast by the Pilgrims and Native Americans in Plymouth, Mass., that became Thanksgiving. "We here in Plymouth consider the day sacred." (Members of the Wampanoag Nation tend to see it differently.)

Critics dubbed Roosevelt's holiday "Franksgiving." The issue divided Americans along political lines. Alf Landon, the Republican whom Roosevelt had trounced in the 1936 election, accused FDR of arbitrarily acting "with the omnipotence of a Hitler."

But the business world was delighted with the change. The earlier date will "spread the 'shop-early' movement and be beneficial to customer, clerk and retailer," said the president of the Merchants and Manufacturers Association. The president of Lord & Taylor predicted that the change could generate as much as $1 billion of additional business, the equivalent of nearly $20 billion today.

Thanksgiving had mostly been observed on the last Thursday of November since President Abraham Lincoln proclaimed it a national holiday in 1863. In 1939, November had five Thursdays, and the last one, on Nov. 30, left a short time for the Christmas shopping season. (Back then, retailers did not dare start promoting the Christmas season until after Thanksgiving.)

In August 1939, Roosevelt announced he was moving Thanksgiving to Nov. 23 at the urging of retailers, who said the later date left too few shopping days until Christmas. The president said the idea sounded "silly" but decided to defer to the merchants, the Associated Press reported.

The late announcement played havoc with planned Thanksgiving events such as rivalry football games, parades, church services and school closings. "College catalogs are already in print. Class schedules are arranged," the president of the American Association of Collegiate Registrars telegraphed to Roosevelt. Students will end up skipping classes both holiday weekends, he complained.

Even some turkey sellers protested the short notice. "Your contemplated change will be injurious to many producers and disrupt marketing plans of processors and distributors," wired the president of the National Poultry, Butter and Egg Association.

Comedians had something new to chew on. On Jack Benny's popular radio show, Benny's wife, Mary Livingstone, read a poem: "Thanksgiving, you're a little mixed up, aren't you, kid?"

Public opinion split along political lines. A Gallup Poll showed Democrats favored the switch 52% to 48%, while Republicans opposed it 79% to 21%. Overall, Americans opposed the change 62 to 38.

Many GOP governors vowed to keep the traditional Thanksgiving date. The result was two Thanksgivings: 23 states and the District of Columbia went with Nov. 23, while 22 states stuck with Nov. 30. Three states - Colorado, Mississippi and Texas - observed both dates.

Thousands of protest letters poured into the White House. But Roosevelt stuck to his drumsticks. On Nov. 23, he dined on Thanksgiving turkey in Warm Springs, Ga. The president's remarks at the dinner reflected the day's grim headlines about 30 British sailors being killed when their battleship hit a German mine in the Thames during the widening European war with Nazi Germany. "Well, we have a war," Roosevelt said. "I hope by next spring we won't have one."

Thanksgiving celebrations took place across the country. In New York City, more than 1 million people turned out for the Macy's Thanksgiving Day Parade, led by a 50-foot Santa Claus. Philadelphia's Toyland Parade drew 500,000 people to see 25 bands, 1,000 clowns and African American movie star and dancer Bill Robinson, "who danced his way along the parade route as the special guest of honor," the Philadelphia Inquirer reported.

In Hollywood, gossip columnist Louella Parsons reported that actor "Ronnie" Reagan was thankful for landing the starring role in the new movie "For the Rich They Sing," which she described as "a comedy with a political slant."

Three of the four Republican governors at the New England Conference at Boston's Statler Hotel dined on turkey. When Gov. Lewis Barrows of Maine was handed a carving knife, he responded, "No, thanks. I've brought a can of sardines with me."

Long before Black Friday, merchants ran Christmas ads on the Friday after the early Thanksgiving. In The Washington Post, the Woodward & Lothrop department store promoted "Christmas Cherishables," such as a "Christmasy Evening in Paris" perfume. In New York, Macy's pictured Santa Claus in an ad for family games, such as a "talking table" called the Voodoo.

On Nov. 30, the rest of the country observed a relatively low-key Thanksgiving. Plymouth staged its traditional Thanksgiving ceremony, which officials pointedly noted was designed to "save the day from exploitation and desecration."

In late 1941, after the United States had entered World War II, Congress approved and Roosevelt signed a proclamation to set Thanksgiving as the fourth Thursday in November, where it remains today, starting in 1942. Roosevelt said at a news conference that he was swayed by government economic reports showing the early Thanksgivings didn't boost total Christmas sales much after all.

"Waving a handful of statistics, graphs, reports and comments," the International News Service reported, "the President admitted that moving up the date of Thanksgiving a week had been a complete turkey."