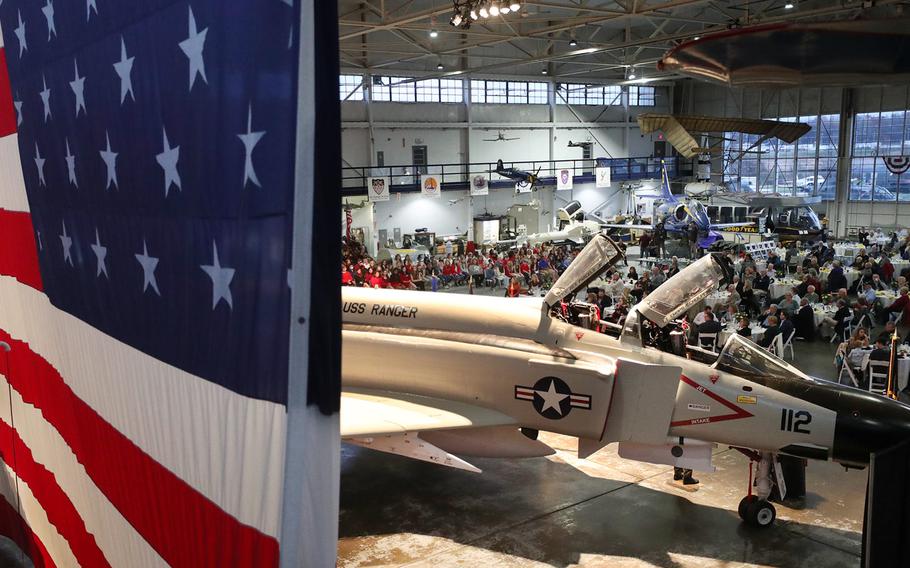 The F-4 Phantom is displayed in front of a large flag as more than 250 people attend the Veterans Day Celebration on Nov. 13, 2021, at the MAPS Air Museum. (Mike Cardew, Akron Beacon Journal/TNS)

Hundreds of military members were reported missing in action during the Vietnam War — of them, over 70 were Ohioans — but the fighter plane housed within the MAPS Air Museum in Green, Ohio, has a special connection to one MIA Canton Township native: Jack Schoeppner.

Two of Schoeppner’s dreams were to attend college and become a naval pilot, so he joined the Navy and achieved both goals.

On March 7, 1970, Lt. Jack Schoeppner and Lt. Rex Lewis Parcels, his radar intercept officer, were assigned a photo reconnaissance escort mission in their F-4 Phantom. After taking off from an aircraft carrier, they disappeared over the Gulf of Tonkin in North Vietnam. The pair were later reported missing in action.

After 51 years, the thought of finding any physical connection to Schoeppner seemed nearly impossible to his family. But that all changed two years ago.

In 2019, MAPS officials informed the naval pilot’s siblings, Barb Aman and Rich Schoeppner, that it would dedicate a different F-4 Phantom — the one housed in the museum — in memory of Jack Schoeppner and Parcels.

It wasn’t until six months later that museum volunteers realized Schoeppner had piloted that very plane only three days before his disappearance.

“That’s when it got really sentimental to us,” Aman said. “Out of all the thousands of planes that [the military] manufactured, that this one happened to make its way back to Canton and that Jack actually flew it.”

The connection was discovered in his flight book, given to the museum by Aman, where Schoeppner had recorded the takeoff and landing of each flight he made in addition to the serial number of the aircraft he piloted.

Documents showed that same MAPS jet went up to search for Schoeppner and Parcels when they disappeared on that fateful day in Vietnam, according to Beacon Journal partner News 5 Cleveland.

The 56,000-pound F-4 Phantom was loaned to MAPS from the Navy in 2003 and has since been restored. Now, the jet plane has “Lt. Chops Schoeppner” (Chops was Schoeppner’s call sign, or nickname) printed on its canopy and the word “Freelancers” near its rear, a tribute to his squadron group.

All these additions were on display during the museum’s Veterans Day celebration Saturday evening. Three of its 260 attendees were Aman, Rich Schoeppner and Lt. Col. Judith Mathewson, Parcels’ cousin. The highlight of the event was when Aman and Mathewson spoke fondly about what it was like to grow up with the two men.

Aman began with her first memory of Schoeppner, recounting how he saved their brother’s life after Rich had ridden his bike into a family member’s in-ground pool. Shenanigans involving darts, a record player and drag racing were also shared with the audience.

The main goal of MAPS, which stands for Military Aviation Preservation Society, is to preserve and share the history of military aviation while honoring those who died in the line of duty. Hence, after the dedication, attendees were given additional time to explore the museum before it closed for the night.

As they explored, some eventgoers discovered that the museum’s lobby houses a dedication to another Canton Township native who died in the Vietnam War. Sharon Lane was a graduate of Canton South High School who, while serving as a nurse in the army, became the only female combat casualty that the U.S. suffered in Vietnam.

Another odd coincidence at the museum has to do with Lane.

Around seven years ago, a section of The Vietnam Traveling Memorial Wall — a 300-foot reproduction of the Vietnam Memorial in Washington, D.C. — broke off and was donated to MAPS. When the organization received panel 23W, volunteers were stunned to see Lane’s name listed near its bottom. The wall piece is now on display next to Lane’s exhibit.

Veterans and civilians, including children on field trips from local schools, will be able to learn and appreciate Schoeppner’s and Parcels’ stories for years to come — much to the delight of their families.

“After Rich, our cousins and I have passed, there is no one else that we could give all of Jack’s memorabilia to,” Aman said. “So, for [MAPS] to do this means that Jack’s story will continue on after we are gone. I think that to me is the most important thing, that he won’t be forgotten.”