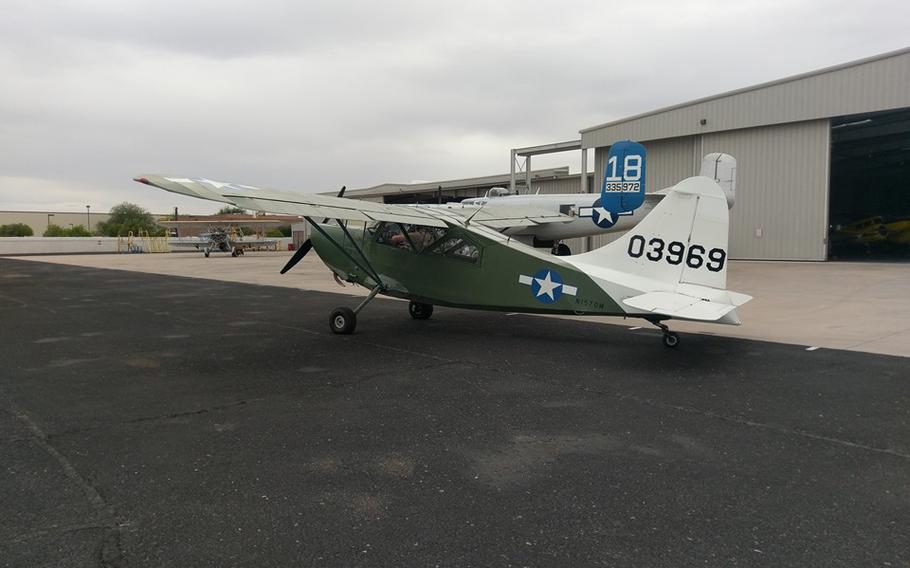 Five military aircraft from a defunct museum at the former Barbers Point are destined for California after Hawaiian Airlines technicians and an ocean shipping company volunteered to dismantle and transport the war birds to their new home. (Naval Air Museum Barbers Pt Facebook)

(Tribune News Service) — Five military aircraft from a defunct museum at the former Barbers Point are destined for California after Hawaiian Airlines technicians and an ocean shipping company volunteered to dismantle and transport the war birds to their new home.

Four helicopters, a fighter jet and other artifacts—all from the now-closed Naval Air Museum Barbers Point at Kalaeloa Airport—will be transported to California and delivered to Castle Air Museum in Atwater in the San Joaquin Valley.

After the Naval Air Museum closed in 2019, the fate of its contents was unclear. Castle Air Museum Executive Director Joe Pruzzo was interested in taking some of the aircraft, but getting everything to California was going to be a major obstacle.

That's when Pasha Hawaii, known for roll-on, roll-off vehicle shipping between Hawaii and the mainland, stepped up to underwrite the $150,000 in shipping costs.

"After reading about the uncertainty of what would happen to these historic aircraft and artifacts in the Star-Advertiser, and Castle Air Museum's desire to make these a part of their collection, we reached out to Joe Pruzzo and offered our services, ensuring this important part of our history could be preserved and shared with the general public for generations to come, " said Michael Pasha, vice president of oversized vehicle shipping and project logistics for Pasha Hawaii, in an email.

The task now is to disassemble the aircraft for shipping, and a group of about eight to 10 volunteer technicians from Hawaiian Airlines have jumped on the opportunity to work on the war birds.

"These technicians that are out here working on it truly do love it, and for a lot of them it's an opportunity to revisit a little bit of their history, " said Brian Kirkpatrick, director of base maintenance for Hawaiian Airlines. He said one of the technicians had flown in one of the choppers.

On Friday, Kirkpatrick and a few of the volunteer technicians visited Kalaeloa Airport to take a look at the two helicopters they'll be working on, an AH-1W Cobra and SH-60 Seahawk. On Saturday they began disassembling the helicopters.

When they are done, the technicians will dismantle two additional helicopters, a Marine Corps CH-53D Sea Stallion and UH-3H Sea King, and an A-4 Skyhawk fighter jet. The three aircraft are larger and will be more difficult to take apart.

It's not yet clear when all the work will be finished, Kirkpatrick said, but the first two helicopters to be dismantled could be headed to San Diego sometime in November. A trucking company in California has volunteered to provide local transportation.

The aircraft destined for California have been involved in war efforts, with some purportedly also appearing in movies. The fighter jet, for example, was used in the Tom Cruise movie "Top Gun, " according to Sam Knaub, who organizes special events and fundraising for Castle Air Museum.

The museum's collection already includes more than 70 restored military aircraft from pre-WWII to present-day fighters, wartime memorabilia and "the most complete lineage of bomber aircraft on the West Coast, " according to its website.

Knaub found out the Naval Air Museum was shutting down and its planes were going to be turned into scrap, so he suggested to the Castle board that they take the aircraft to create a helicopter display.

"They were just going to get cut up, and I couldn't see letting that happen, " he said.

The other artifacts will be placed in 40-foot containers provided by Pasha Hawaii and shipped to Oakland before being delivered to Atwater. They include utility trucks from the Vietnam War and World War II. An observation plane, a rotating beacon and a bomb loader from World War II will also be transported.

Pasha, a third-generation member of the family that owns Pasha Hawaii, said moving military planes isn't an unfamiliar task for the company. One of their ships regularly transports military equipment, he said, and brought in a Blue Angels F /A-18C Hornet for the Pearl Harbor Aviation Museum earlier this year.

"Overall, I have a personal interest in historic preservation because of the crucial role it plays in connecting future generations to our past, " Pasha said.