A provision in the bipartisan congressional infrastructure bill earmarks $1 billion for "reconnecting neighborhoods" torn apart by interstate highways. If passed, it will be the federal government's first effort to address inequities in urban infrastructure dating to the mid-20th century. In that era, freeways were often built through Black and brown enclaves, creating literal barriers to economic opportunity. The bill aims to fund the demolition of obstructive highways and mend communities.

The effort would expand on existing efforts undertaken by some cities — among them Rochester, N.Y., New Orleans, Baltimore, Duluth, Minn., and Tulsa — to convert highways to neighborhood spaces and correct the mistakes of the past.

But, in the 1950s, one of those mistakes was narrowly averted, not because of any help from Congress but despite the legislature.

If lawmakers had had their way, Washington's popular Chesapeake & Ohio Canal National Historical Park — which attains its 50th anniversary as a national park this year — would have become a 60 mph highway. Then a Supreme Court justice stepped into the fray, embarking on a nearly 200-mile "protest hike" along the canal's towpath that ultimately helped to convince President Dwight D. Eisenhower to preserve the canal.

Before the hike, a highway seemed a logical use for the path of the old, neglected C&O Canal.

The waterway had seemed cursed from the start. President John Quincy Adams lifted the first shovelful of dirt in 1828 for what investors envisioned as a liquid highway transporting goods between Washington and the Ohio River. But numerous setbacks delayed completion at Cumberland, Md., until 1850. By then, railroads had rendered the canal obsolete. The government bought the property in 1938, and most of it quietly went to seed.

As highway building boomed across the country, Maryland lawmakers proposed converting the canal site into a parkway by filling in some sections of the waterway and building alongside it elsewhere. Proponents said it would boost the state's economy and allow people to drive to an adjacent recreation area for picnics. A Washington Post editorial argued that it would "enable more people to enjoy beauties now seen by very few," similar to Virginia's Blue Ridge Parkway.

Supreme Court Justice William O. Douglas disagreed. Douglas had grown up in Yakima, Wash., and often explored the untrammeled Cascades, climbing the peaks and fly-fishing for trout. "I learned early that the richness of life is found in adventure," he wrote in his 1950 memoir "Of Men and Mountains," and he managed to find a bit of wilderness along the C&O Canal while serving on the court.

Douglas responded to The Post's editorial with a letter to the editor. The disused canal was "a refuge, a place of retreat, a long stretch of quiet and peace at the Capitol's back door ... a place not yet marred by the roar of wheels and the sound of horns," he wrote.

Douglas challenged The Post's editors to walk the towpath's 184.5 miles with him. They would see the river blanketed in mist, hear the "whistling wings of ducks" and observe spring's first blooms — gaining a deep understanding they could never obtain from the window of a speeding car. 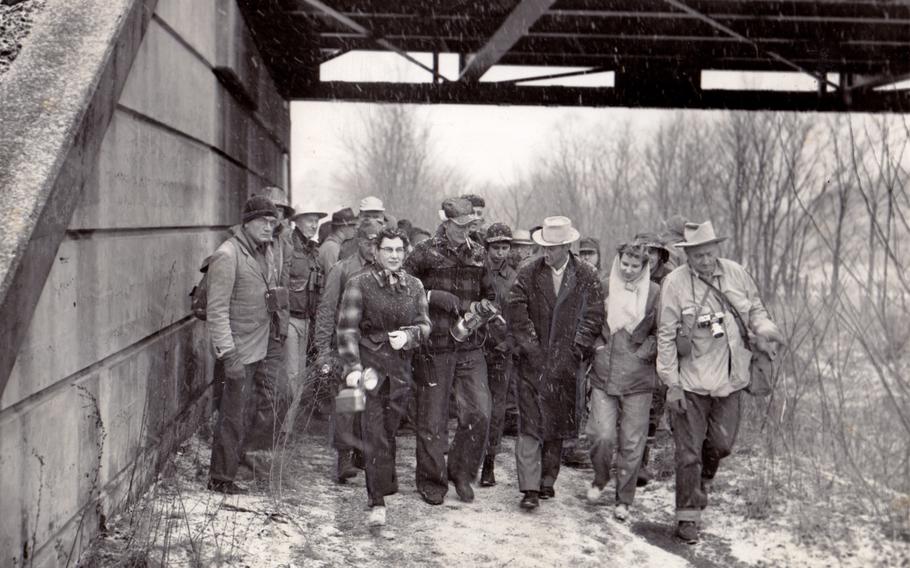 The C&O Canal troupe, pushing on through a blinding snowstorm, passes beneath a Western Maryland Railroad trestle on March 21, 1954. Justice William O. Douglas is on the right. (Douglas Chevalier/The Washington Post)

Editorial page editors Merlo Pusey and Robert Estabrook accepted Douglas's challenge. As word spread, the group swelled to 34 people — "a little larger than the Lewis and Clark expedition," Douglas said — including leading conservationists like Olaus J. Murie and Sigurd Olson. Journalists covered the event for The Post and the Associated Press. The Wilderness Society took care of logistics.

The hike kicked off on March 20, 1954. Despite starting out from Cumberland after a drenching rain and then encountering a snowstorm, the group averaged a brisk 23 miles a day. The ornithologists among them identified waterfowl, foresters pointed out types of trees and geologists marveled at the Potomac's cliffs.

Even if the journey was long, the hikers weren't exactly roughing it. The Potomac Appalachian Trail Club carried their gear and prepared meals on the trail, and sporting clubs hosted them in their private lodges at night, where they dined on steak, salmon and champagne. All along the trail, local residents provided lunch — and their thoughts for and against the parkway proposal.

Eight days later, the hikers neared the finish line. Douglas and his comrades boarded a historic canal barge and were towed by mules the final few miles into Georgetown, waving to thousands of spectators.

The hike made an impression on The Post's editors. They admitted that they had underestimated the proposed parkway's potential to destroy historical structures. "We also believe that many semi-wilderness stretches along the old canal ought not to be disturbed," they wrote.

Several more years of negotiations went by before Eisenhower protected the canal as a national monument under the Antiquities Act in 1961, and another decade before President Richard M. Nixon signed the act designating the canal and towpath a national historical park. Zanotti said Douglas's prominence was a big part of the C&O's preservation. "We won the battle," she said, "but other communities lost."

Tulsa's Greenwood neighborhood, for example, known as "Black Wall Street," was recovering from the 1921 anti-Black riot that nearly destroyed it when it was bisected by Interstate 244 in the 1960s. The Scajaquada Expressway runs through the middle of Buffalo's Delaware Park, a green oasis designed by Frederick Law Olmsted. The elevated Brooklyn-Queen Expressway isolates Brooklyn's waterfront and casts a shadow over its Red Hook neighborhood.

In comparison with the rest of the country, Washington, D.C., was relatively successful in fighting off destructive freeways, even when opponents didn't have Supreme Court justices in their corner. A highway building boom followed the passage of the Federal-Aid Highway Act in 1956, and activists concerned about the impact on urban neighborhoods launched a movement dubbed the "Freeway Revolt." Black residents of Northeast Washington succeeded in blocking the controversial North-Central Freeway that would have demolished thousands of homes. A coalition of university students and activists occupied the site of the proposed Three Sisters Bridge to preserve part of Georgetown's Potomac River shoreline.

In the spirit of Justice Douglas, James leads birding walks for congressional staffers on Capitol Hill. The goal is to show them — in a "low-key" way, he said — that urban natural areas are worth protecting.

"The story of how these things became where they are today is important for us to understand," he said. "If we know how we got here, we're in a better position to know what to do next."