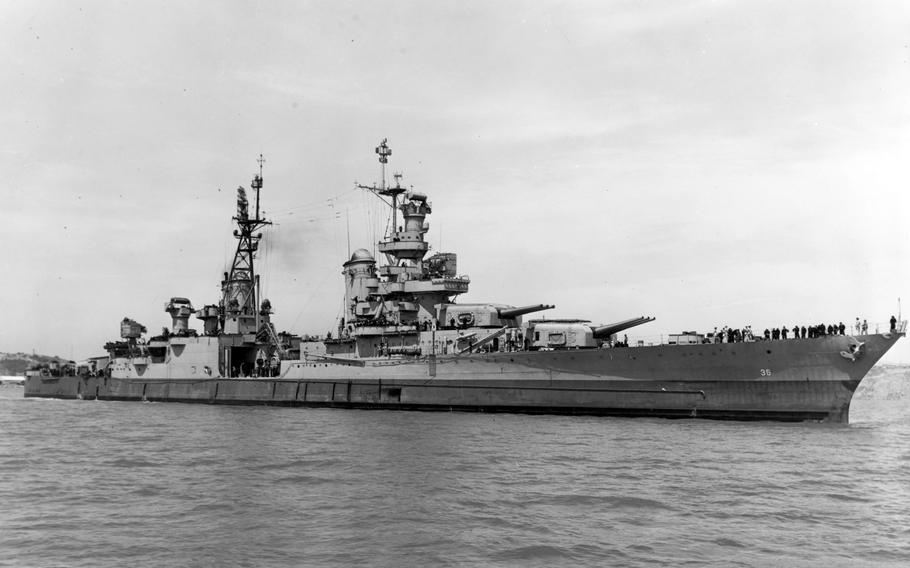 The USS Indianapolis off of Mare Island on July 10, 1945. (National Archives)

MARE ISLAND, Calif. (Tribune News Service) — A longtime link between the civilians who worked together through war and peace ends Dec. 31 when the Mare Island Navy Yard Association becomes history after 100 years.

"It's time," said Ralph McComb, the association's president for the last 25 years.

"We've lost the ability to have new members because the Navy yard is no longer there and the rest of us are getting up there," McComb said.

During its halcyon days of the Cold War in the 1980s, there were more than 5,000 Mare Island Navy Yard Association members. Since the base closed in 1996, numbers have slowly dwindled. It's now a few more than 200.

"Without new blood ..." said McComb, not having to finish the sentence.

With the 100th anniversary this year, members gathered last Saturday at Mare Island Brewery at the Coal Sheds as a last hurrah.

"It was a good time to say goodbye," said McComb. "I've loved being associated with the organization. The people you work with are the most unselfish people you'll ever meet. They give from the bottom of their heart. It's just been a great group of people."

The Navy Yard Association unified the civilian workforce of the Mare Island Naval Base. Its credits include being the driving force behind the Civil Service Retirement Service, which helped launch the organization in 1921, to successfully fighting the politically motivated transfer of Mare Island operations to Alameda in 1923.

In the 1960s, the NYA was instrumental in creating the Council of Naval Employees' Groups, comprised of all West Coast Naval shipyards. In 1986, the NYA organized the National Association of Naval Shipyards, mobilizing Public Shipyards as a single force capable of advancing common causes.

Following the base closure, it became a connection between former island workers via a monthly newsletter of what's happening on Mare Island.

"We would try and bring the highlights, certainly not the lowlights," said McComb, who worked on the island from 1968 to 1999.

Veterans advocate Nestor Aliga credits the association for its part in lobbying on behalf of the Mare Island Naval Cemetery and for the association's unrelenting — if futile — battle to save the Vallejo base and other bases from closure.

"The Navy Yard Association took the lead on fighting the closure," Christiansen said. "We brought the union, management together. We all worked as one to attempt to overturn the decision made to close Mare Island. As hard as we worked and as much as we thought we had a plan, it was a lost cause. We had an argument to counter the closure argument but it didn't matter. We understand that by 1993, we were going to be closed."

When it became official, "we were devastated," said Christiansen, admitting he "will probably feel a little sad" when the books are finally closed on the association.

"For the first 75 years, it benefitted civilian employment at Mare Island. The last 25 years, it kind of helped keep the retirees in touch and let them know what's going on post-closure," Christiansen said, concurring with McComb that dwindling membership told the story.

"It was time," said Christiansen, "to fold up our tent."

Christiansen created the bulk of the newsletter copy and said he enjoyed reporting Mare Island's progress.

"Most was positive stuff. Some was negative, like when they closed the golf course," he said. "That made a lot of the members sad."

Christiansen started working on the island in 1957 as part of a college work-study program after recruiters visited Vallejo High School, proclaiming "we need engineers."

He remained for 36 years, following in the Mare Island footsteps of his father. And two of Christiansen's three kids worked on Mare Island.

"It's almost a family tradition," Christiansen said, describing the zenith of Mare Island activity as "rather hectic" when its nuclear program was in full swing building more than one submarine a year.

"You'd put in a lot of hours. I got called any time, day or not," Christiansen said. "It was a bigger challenge than I had anywhere else."

"So many good memories," McComb said. "When I first started, building new ships. That was fascinating for a young man just out of high school."

McComb traveled to many ports, "making some really good friends in the Navy along the way. People who worked on the island had a sense of dedication. There was a feeling of extra importance of what they did. We built nuclear submarines and that was just cool as heck. The whole experience was amazing."

When the Mare Island Naval Shipyard closed, "it was so sad," McComb said, acknowledging the battle to keep it open, "but minds were made up. When it happened, I never heard so many sad stories. There was a true feeling of loss. At first, it was disbelief. People would come into my office crying. What can you say to someone who, like myself, had worked there since they were 18?"

"Everyone comes to each meeting with a new story, new event, new something in their life," he said. "You would always leave just a little bit happier than when you got there."

And life goes on.

"I'm going to be doing everything I've been doing, minus the association," McComb said, grateful for his time as president.

"We were always about serving our members," he said.