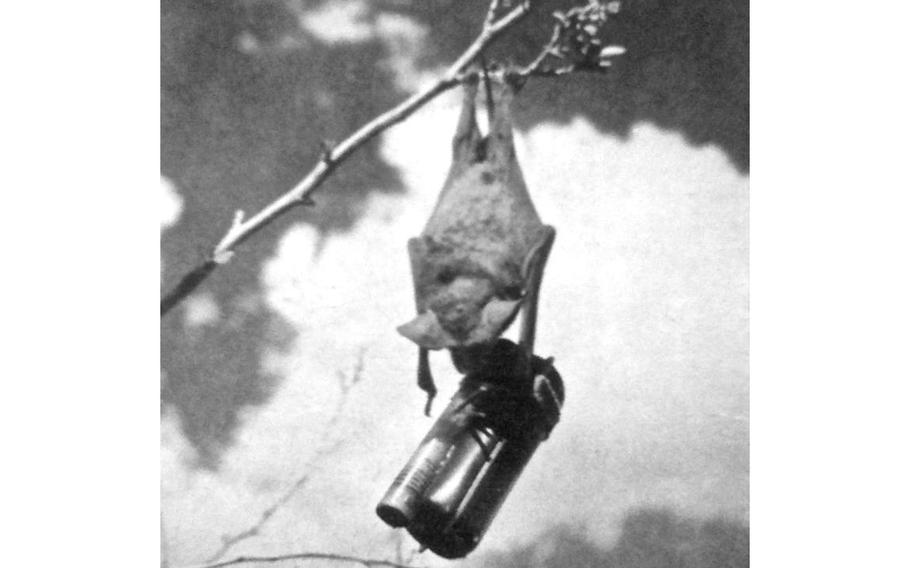 Before the first atomic bomb test at Trinity Site, in July 1945, another secret weapon was being tested in the New Mexico desert. Project X-Ray, a classified weapons system using the Mexican freetail bat from Carlsbad Caverns and some Texas caves aimed to produce “bat bombs.”

This Carlsbad Current-Argus article from Nov. 11, 1968, gives the details of the experiment:

But they didn’t quite make it. Sex, ice-cube tray hibernation and incorrect earth landings stood in the bats’ way of bringing historical recognition to their group.

How did they almost assist?

A month after the Japanese attack on Pearl Harbor, a Pennsylvania dental surgeon, Dr. Lytle S. Adams, proposed to President Franklin D. Roosevelt a plan that would destroy the flimsily built, wooden cities of Japan with swarms of bomb-carrying bats.

Adams believed that bats in the Carlsbad Caverns and from other American caves could be fitted with incendiary (fire-producing) bombs and dropped on Japan.

Containers of bats parachuted out of bombers

Large containers full of bats would be parachuted out of high-flying bombers. When the containers reached low altitudes (1,000 feet) they would open and release the bats.

The bats would then fly down and crawl into nooks and crannies of buildings where their incendiary bombs would explode. Thousands of fires would then break out simultaneously and the bat-beleaguered town would burn to the ground.

In search of bats, Adams found that Carlsbad Caverns had a bat population of about nine million, with 500,000 in one chamber alone. But, in Ney Caverns, Texas, Adams found the largest bat colony in the country — 20 million bats.

Chemical Warfare Service and National Defense Research Committee developed two bombs, burning four to six minutes each. Bombs were to be attached to the loose skin on a bat’s chest by a surgical clip and string.

According to theory, the bat was to land, gnaw through the string, fly away and leave the bomb behind. 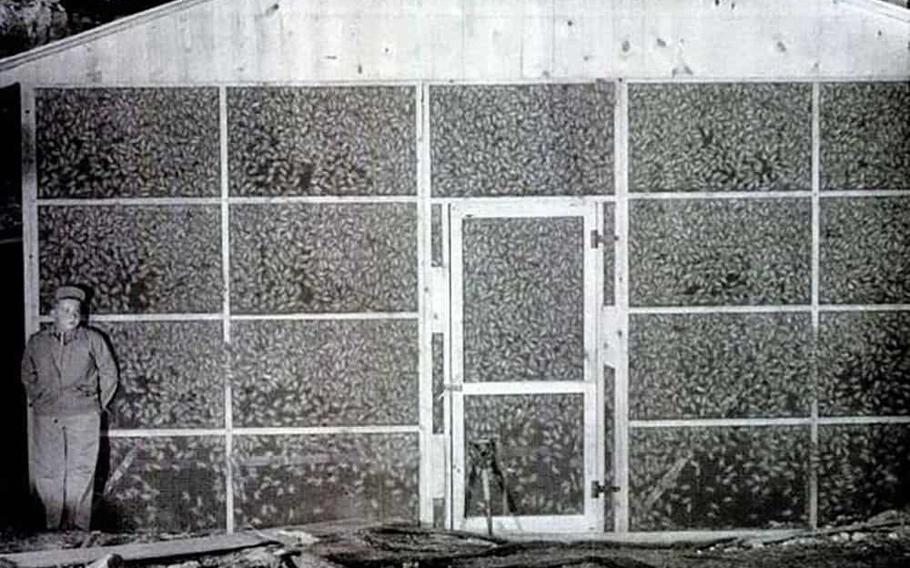 To ship bats, they had to be cooled in ice-cube trays at 40 degrees to induce hibernation. Unfortunately artificial cooling was a tricky business and in early attempts the bats didn’t wake up.

Other problems included having the bats fly off and not descend properly or just fall to earth. During one test run, the bats set fire to a hanger and the staff car of a general who had come to see the show. (Another article says the general’s car was set afire in a test in California,)

The ultimate problem was when female bats became pregnant and the disconsolate males wouldn’t eat properly while this state of affairs lasted. Usefulness of the bats was therefore limited to the last five months of the year.

Full-scale tests were then planned for August 1944 and the use of bat-bombs against Japan, if all went well.

The government canceled the bat-bomb operation because bats couldn’t be available immediately.

A Current-Argus article from March 23, 1982, added the following details:

The bombs each weighed one ounce and were capable of giving off a 22-inch flame for a period of 8 minutes.

Adams had visited Carlsbad Caverns just before the Japanese sneak attack on Pearl Harbor. That’s where the idea was born.

The bat is a strong and powerful flyer, capable of carrying twice its weight. Adams also learned from a park naturalist that the Mexican freetail often inhabit houses, other buildings and bridges as well as caves.

Adams came to Carlsbad. He set up his laboratory and office in an auxiliary hangar at the airport, which was a military airfield during the war.

Project X-Ray was given top priority by the military, which termed the bat bomb concept “the greatest weapon ever dropped from an airplane.”

The Army sent a team of photographers to the Carlsbad airfield where field tests were being conducted. Several dormant bats — the “bat battalion” was kept cold with dry ice until they were ready for action — were removed from a cold storage room, armed with real bombs, and placed in the sun to be photographed.

There were two problems: the bats “warmed up” and flew away, and the Army forgot to disarm the bombs.

Despite the best efforts of the military, the bats were gone. Meanwhile, a portion of the Carlsbad base and the building housing Adam’s records were destroyed in a fiery blaze from the errant bat bombers.

In October 1944, Project X-Ray was officially terminated by military brass in Washington.

Adams speculated that Project X-Ray was killed because the atomic bomb had been developed before the bats could be used against an enemy city or fortification.