Bear River Massacre was the worst slaughter of Native Americans in US history, but few remember it Darren Parry, the grandson of Mae T. Parry, looks out over the site where ancestors from his tribe — the Northwestern Band of the Shoshone Nation — were massacred in 1863 by the U.S. Army. Parry has been working to get more recognition for the site and helping on plans to build a facility that would honor those who were killed. (Courtesy of Darren Parry)

Historians consider it the worst massacre of Native Americans in U.S. history. Yet few have ever heard of it.

The Bear River Massacre of 1863 near what's now Preston, Idaho, left roughly 350 members of the Northwestern Band of the Shoshone Nation dead, making it the bloodiest — and most deadly — slaying of Native Americans by the U.S. military, according to historians and tribal leaders. The Indians were slain after soldiers came into a valley where they were camping for the winter and attacked, leaving roughly 90 women and children among the dead.

The death toll, historians say, exceeded some of the country's most horrific Indian slayings, including the 1864 slaying at Colorado's Sand Creek, where 130 Cheyennes were killed. And the death count was nearly double the roughly 150 Sioux killed at Wounded Knee in South Dakota, four days after Christmas in 1890.

Some accounts put the Bear River death toll even higher than 350.

In one account of the brutality, Danish immigrant Hans Jasperson in his 1911 autobiography said he walked among the bodies, counting 493 Shoshone Indians dead, according to a 2008 article in the Salt Lake Tribune. Jasperson wrote, "I turned around and counted them back and counted just the same." "It almost annihilated us as a people," said Darren Parry, former chairman of the Northwestern Band of the Shoshone Nation. "But it's largely been forgotten."

Many historians say the biggest reason the Bear River slaying is lost — or ignored — in history lessons is because its "carnage (was) eclipsed by Civil War battles" raging at the time, according to Charles Peterson, a historian at Utah State University. He said it's ironic it receives so little attention, given the well-known Native American woman — Sacagawea — was Shoshone and became famous for having served as a guide to explorers Lewis and Clark across the West.

Jonathan Deiss, a military historian based in Washington, compared the slaying of Native Americans in the 1800s to mass shootings in the 21st century. "People became numb to them," Deiss said.

"People considered Indians not really humans," Deiss added, "so it was easy to justify killing them or mistreating them."

The Shoshones were once a nation that had 17,000 people that included several bands that stretched across parts of Nevada, Utah, Idaho and Wyoming. They traveled with the seasons. In early autumn, they went to Salmon, Idaho, to fish. In the spring and summer, they'd go to Utah to gather seeds, berries and roots.

When cold weather hit, they hunkered down in the Cache Valley, which runs through northern Utah and southeast Idaho. The willow and sagebrush in the valley helped protect them from the wind and snow of winter blizzards and the "Big River," or "Boa Ogoi" as the Shoshones called it, had an abundance of fish, plus the area was rich with wild game.

In the 1800s, the Shoshones and other tribes faced a slew of hardships and troubles as the U.S. government wanted to rid the country of what officials called the "Indian problem." Settlers moving west and Mormon farmers invaded Shoshone land, and miners caused skirmishes as they passed through on their way West to find gold.

After the Civil War started in 1861, President Abraham Lincoln sent regiments from the 3rd Regiment California Volunteer Infantry in the Union Army who were stationed at Fort Douglas near Salt Lake City to help protect the mail routes and telegraph lines that ran through the Cache Valley area. But many of the troops were frustrated they were there and wanted to be on the front lines of the Civil War. 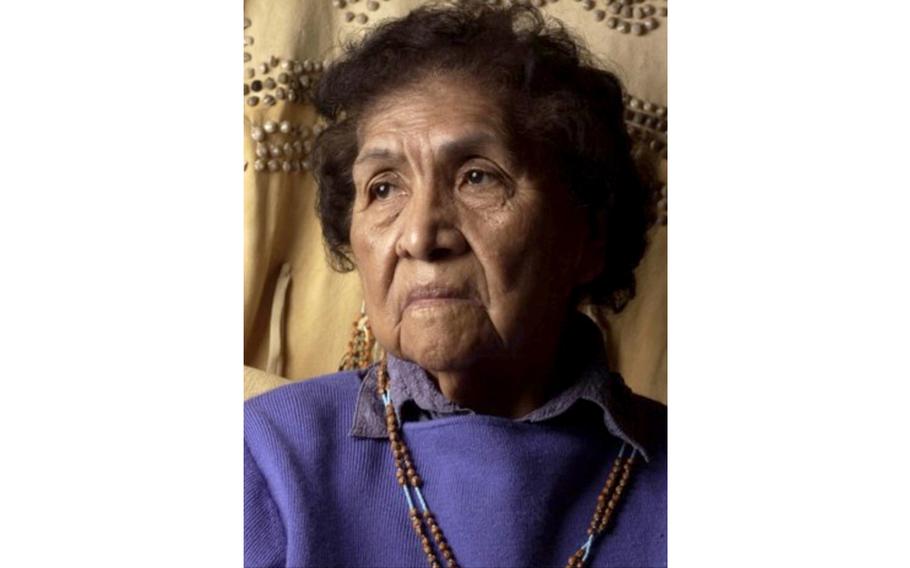 Mae T. Parry — an elder and historian of the Northwestern Band of the Shoshone Nation — wrote of the Bear River massacre that killed roughly 350 members of her tribe. She’s the granddaughter of Chief Sagwitch, who survived the massacre. (Courtesy of Darren Parry)

On Jan. 5, 1863, 10 miners traveling south on the Montana Trail were said to have been murdered by Indians. A day later, a group of White men headed to Salt Lake City got lost and were allegedly robbed by Indians. In an argument about returning some livestock, a White man named John Smith was fatally shot. A judge issued a warrant for some of the Shoshone men who were accused of killing him with orders for U.S. Army Col. Patrick Connor to "effect the arrest of the guilty Indians," according to records from the National Park Service.

By then, cold weather had set in and the Shoshones were in their winter grounds for the season. When a spiritual leader told of a dream where Indians were killed by soldiers on horseback, about 50 left and went to another site. But many stayed with Shoshone Chief Sagwitch.

"How can you move people in 4 feet of snow to anywhere you couldn't be followed?" Parry said.

On Jan. 29, 1863, Connor's unit of almost 300 infantry and cavalry came down a frozen, wintry bluff into the Shoshone's winter camp.

That morning, Sagwitch got up early. He saw steam from the mountains and realized as they got closer it was the horses' breath in the cold air. Sagwitch told his people he was going to try to talk to the military leaders, and he ordered his warriors not to be the first to fire weapons, according to Mae Parry, who was a great granddaughter of Sagwitch and wrote about the massacre.

But the colonel didn't ask for the men before his soldiers started to fire.

In his memoir, William Drannan — who was an Army scout — said when they started to fire "it frightened the Indians so that they came running out ... like jack rabbits and were shot down like sheep."

The Indians had "very few rifles," according to Darren Parry. They fought with tomahawks, spears, bows and arrows.

The soldiers pushed the Indians closer to the river.

"They flanked the Indians," Darren Parry said, and the river "became their last resort." Some jumped into the river but were shot and others were swept away in the icy current and drowned.

Another Shoshone Chief — Bear Hunter — faced torture after soldiers captured him. Whipped and kicked he said "not a word, nor did he cry out," according to Mae Parry's writings. "To him," she said, "that would have been a sign of cowardice."

Because he showed no fear of the pain, soldiers heated a rifle bayonet and "ran it through his head from ear to ear," Mae Parry said.

"They wholesale massacred the tribe," Darren Parry said. "Men, women and children. They lost their lives."

Some 150 Shoshones survived, according to tribal historians.

Chased by soldiers with her baby strapped to her back, Anzee Chee — a Shoshone woman — jumped into the river and hid under an overhang along the bank. But she had a hard time trying to care for her own wounds and she couldn't keep her baby from crying, according to writings from Mae Parry.

"She knew that if the soldiers heard the crying baby they were both sure to die," Mae Parry wrote. The only way Anzee Chee believed for "one of them to live was to throw the baby into the river, and that she did."

According to a website of the tribe's history, she was afraid the teepee would go up in flames and told him to lay very still. But Yeager raised his head and found himself looking into the barrel of a soldier's gun. Shoshone historians said Timbimboo later told of how the soldier raised his gun and lowered it twice, looking into his eyes. Then he put it down and walked away.

After the massacre, Conner, the colonel who lead the attack, told of the "bodies on the field" in a report he sent to the then-U.S. War Department. He said they had destroyed over 70 Indian lodges and captured 175 horses. He noted that he left "a small quantity of wheat for the sustenance of 160 captive squaws and children whom I left in the field."

Capt. James Fisk visited the site months later and wrote, "Many of the skeletons of the Indians yet remained on the ground, their bones scattered by wolves," according to the National Park Service. Connor was promoted to the rank of brigadier general after the massacre. 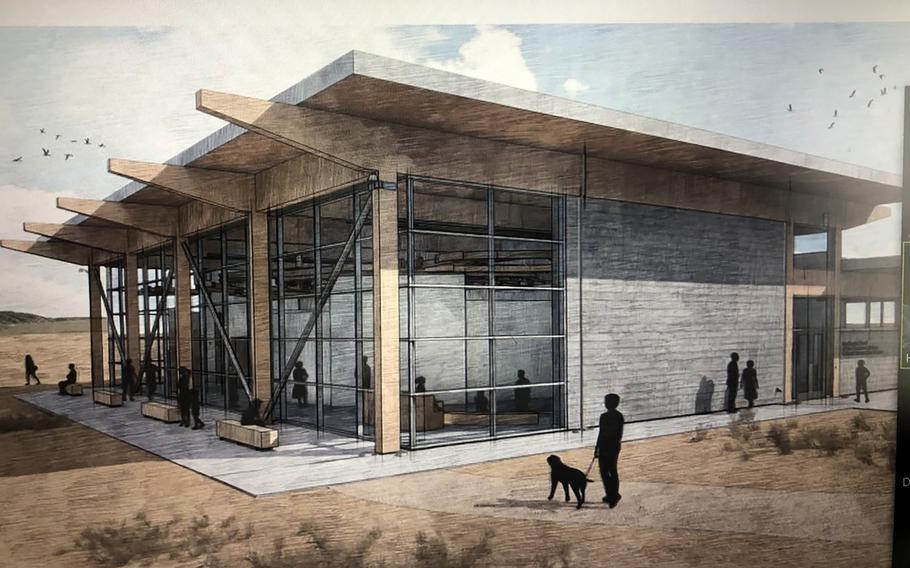 A rendering of the facility the Northwestern Band of the Shoshone Nation wants to build near Preston, Idaho, to honor their relatives who were killed in the Bear River Massacre in 1863. (GSBS Architects/Darren Parry)

A Shoshone tribal history called the massacre a "clash of two diverse cultures trying to share the same land, and the Shoshone lost."

Ever since the 1863 massacre, the land where the massacre happened has been privately owned. At one point decades ago, landowners said they tried to plow the land for farming but too often found human remains believed to be those of Indians.

In 1990, it was designated as a national historic landmark and Mae Parry and other Shoshones fought for decades to have it be recognized as a massacre and not as a battle, as some historical markers had called it. The Northwestern Band of the Shoshone Nation bought about 550 acres of Bear River land in 2018. The tribe, which now has a population of about 560, plans to build an interpretive center to honor the history and those lost at Bear River.

"It's our place where our old people died," said Rios Pacheco, a tribal elder, said speaking in Shoshone in a video produced about the slaying. "They were killed by the Army. Their spirits are still here and we are still here."