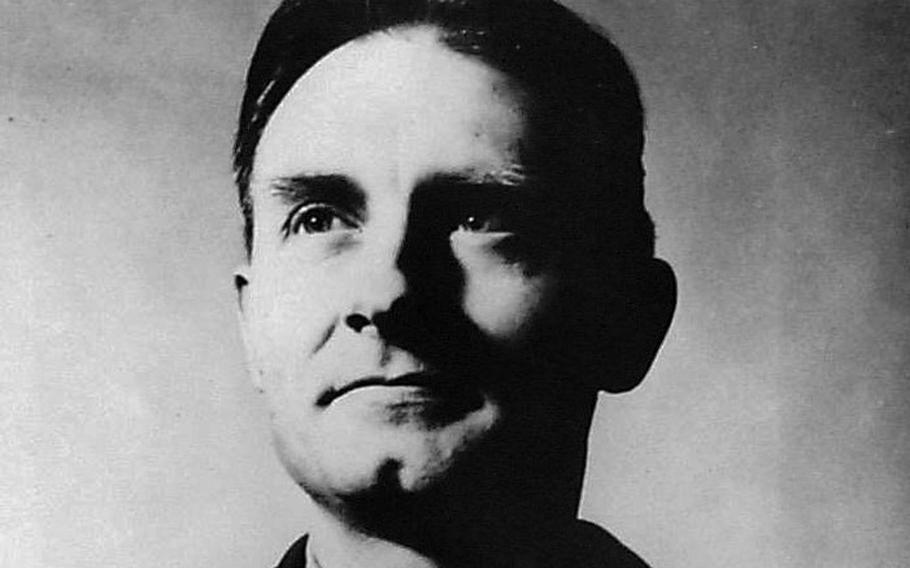 U.S. Army chaplain Fr. Emil Kapaun died in a prisoner of war camp in Korean on May 23, 1951. On April 11, 2013, former President Barack Obama posthumously awarded Kapaun, credited with saving hundreds of soldiers during the Korean War, the Medal of Honor. (U.S. Army)

(Tribune News Service) — For more than 60 years nearly all of Father Emil Kapaun's prisoner of war friends thought he was lost forever. They hated saying that, but they'd seen with their own eyes how more than 1,400 of their comrades who died in the first winter of the Korean War prison camp had been dumped into mass graves.

And they knew that the Chinese, after the war, had sent some remains home to us, but avoided the embarrassing task of digging up most of the mass graves in North Korea.

But in 2005 Father John Hotze, a priest from the Diocese of Wichita received a message to call an elderly former POW. What he heard prompted him to fly to Naples, Fla., to talk to the man.

What he heard from the old soldier became pivotal to the 70-year search for the Korean War hero.

He had interviewed POWs Mike Dowe, Bill Funchess, Bob Wood and many other ex-prisoners who were still pushing for the Medal of Honor, and sainthood, for Kapaun.

They told him no one in Camp Five saw Kapaun get buried after he died. They assumed that his body had been rolled into a ravine or buried in one of the mass graves in Camp Five, the prison camp encompassing the North Korean village of Pyoktong, which lies on a small peninsula surrounded on three sides by tributaries of the Yalu River.

The old soldier's name was William Hansen, a New York native who had survived three years of imprisonment and starvation in Camp Five.

There are two differing stories about how Hansen found Hotze.

Hansen's daughter, Beth Ann Hansen, remembers that her dad saw a story in a Korean War veterans newsletter saying that Kapaun had been buried in a mass grave; her dad got upset, and said that was not true — and asked Beth Ann to track down Hotze.

But Hansen himself told Hotze that nightmares led him to call.

He'd been a bus driver in New York after the war. He retired to Florida and drove a bus there.

The nightmares about the war, and other medical problems from his prison camp starvation, had worn him out. In 2005 he finally went to a Veterans Administration office to see a doctor.

In the waiting room he saw a magazine hanging from a rack.

He grabbed the magazine — a publication of the Catholic Knights of Columbus. The cover showed a Catholic priest, arms spread in devotion, standing in a field of brown corn, using the hood of an Army jeep as an altar.

The priest was praying with an American soldier who was kneeling before him.

Hansen guessed correctly that the cornfield was a Korean battlefield. Hansen carried the magazine into the VA doctor's office. "I know him," he said.

The magazine story reported that a Father John Hotze from Kansas was investigating Kapaun's candidacy for sainthood.

Hansen asked whether he should call Hotze and tell what he knew.

Maybe he shouldn't, Hansen told the doctor: The Army had told him to never talk about Camp Five.

The doctor scoffed. "What's the Army going to do after 50 years? Put you in prison at your age?"

"I buried him," he told Hotze. "I was one of them that dug his grave and buried him."

This was new information, Hotze knew.

Hotze was by then as much an authority on the Korean War hero as anybody. He knew that while Dowe and others said Father's remains were lost forever, a Pentagon analyst, Phil O'Brien, had differed.

Hansen had other stories.

Sick prisoners at Camp Five were sometimes taken by guards to an abandoned Buddhist pagoda for "treatment."

The pagoda was built on a rise above Pyoktong village. The sick would go to a "sickhouse" — a room where prisoners were sometimes (barely) treated for illnesses. The guards used most of their meager supplies for their fellow guards.

But the sickhouse was to Kapaun what a candle flame is to a moth. Before he got sick himself, Kapaun stole medicine there, Hansen said — and used Hansen as his accomplice. Kapaun would lead Hansen in. The guards would tell them to go away, but Kapaun would say: "We're ordered to help the doctor."

And then one of the men would make a noise or another disturbance to distract guards, and the other man, usually Kapaun, with only seconds to work, would steal medicine.

The bottle labels were written in Chinese, but Kapaun had coached sickhouse prisoners to watch guards hand out medicine. The sick would tell Kapaun which bottle the guards used to treat dysentery, for example, and Kapaun, when he took stolen bottles to Drs. Sydney Esensten or Clarence Anderson would tell them which bottle treated dysentery, which treated pneumonia.

Not far from the sickhouse was another room — a place filthy with excrement and maggots.

Hansen by late May was in the sickhouse, coughing with pneumonia aggravated by starvation.

He saw four almost skeletal Americans walking from Pyoktong toward the pagoda one day. The Americans were under guard, all of them crying as they carried a litter with a sick man.

They left the man in the Death House room.

But then he woke up.

And he asked Hansen to help him go out on the front steps of the Death House so he could get a look at the sky.

On May 21, 1951, after finding Kapaun lying in the Death House, Hansen helped him get to the door that first evening, and the two of them made small talk, with Kapaun looking out at the sky and the land.

Kapaun was barely alive, but still his pleasant self.

When guards brought food, Hansen helped Kapaun back into the Death House room. Hansen walked to a door a few feet away, where guards were handing bowls to the sick.

Hansen took one bowl for himself, then took a second bowl to Kapaun.

One took Kapaun's bowl. The other said: "He needs to get his own food." The guard took the bowl back to the door, set it on the floor. Kapaun could have it if he made his own way there, the guard said.

Kapaun was too weak to walk, and the guards would not let Hansen carry him over there.

Hotze knew this would be the first eyewitness account about guards hastening Father's death. Dowe and Nardella and the rest had all said the guards had murdered him, fearing his leadership of the POW resistance in the camp. But none had eyewitness evidence this obvious.

There was one thing more.

When Hansen told it, Hotze knew he needed to call not only Dowe and Funchess but the Pentagon analyst Phil O'Brien.

When he did so, O'Brien quickly sent other analysts to Naples, Florida, to interview Hansen themselves.

Two mornings after Father was confined to the Death House, a guard motioned to Hansen: "Follow me."

The guard motioned to two other prisoners as well, men whose names Hansen had forgotten. The guard told the other men to go get a body from the Death House.

The guard then led Hansen out the back of the pagoda.

Moments later, the other POWs came, carrying a body.

"Bury him," the guard said. Then he walked away.

Why leave them unsupervised? Probably, Hansen said, because the guard was alone, young, and may have felt uncomfortable standing there with three tall Americans, though the three were enfeebled from hunger.

The guards until now had made prisoners bury their dead in piles, and under supervision, along the Yalu River because the soil was softer for digging. The guards never gave them tools, so they dug pitiful holes with their hands and pieces of broken wood.

But Hansen and the others were alone now, with Kapaun.

They picked up his body and walked past a row of low huts next to the pagoda. They chose a spot where no other bodies were buried, in back of a lean-to shed.

They scratched out a single grave with their fingernails, Hansen told Father Hotze.

It was pitiful, Hansen said — the soil half-frozen. They dug only a foot and a half down, laid Kapaun in the hole and pushed dirt.

And then they took what Hansen said was a risk: They said a prayer over the grave. Prisoners like Kapaun got in trouble for praying; guards made some of them stand naked in the cold.

Hansen and the others then did something that O'Brien would later say was significant:

They knew what could happen to Kapaun's body after they left: Feral hogs and dogs might dig where the prisoners dug. So rocks on the grave might discourage them.

But as O'Brien pointed out, the rocks would also mark that spot as a single grave, unlike the unmarked mass graves in Camp Five.

And when Chinese soldiers in 1954, under the terms of the armistice, began looking for graves of Americans (while avoiding the mass graves) the rocks on Father's grave would have been like a signpost, telling them: "Dig here."

Had Hansen waited longer, he'd have taken his stories to his grave.

When Hansen first walked into that doctor's office in 2005, he had lung cancer, though he did not know it at the time.

He died a few months after talking with Hotze.