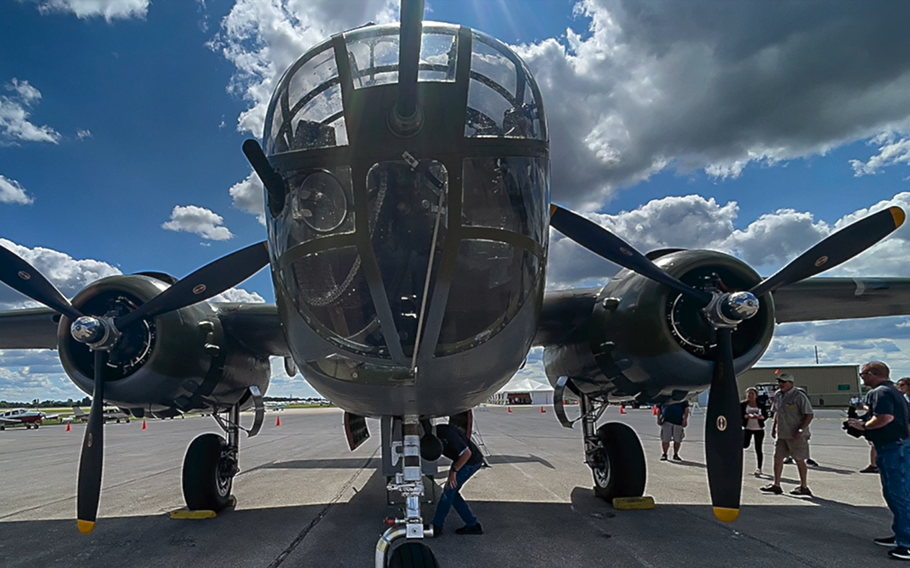 A B-25 Mitchell aircraft from WWII will be part of the 50th National Stearman Fly-In. (Screen capture from video/The Register-Mail)

GALESBURG, Ill. (Tribune News Service) — Aviation enthusiasts have an opportunity to get a close look at a historic B-25 Mitchell aircraft from WWII at the 50th National Stearman Fly-In.

The Experimental Aviation Association (EAA) is displaying the “Berlin Express” as part of a tour, with a stop at the National Fly-In through Sunday.

According to Berlin Express pilot Matt Cooper of Seattle, the tour allows for people to gain an appreciation for the history of the people who made sacrifices for us to be here today.

“(It) allows us to interact with a lot of people who have a personal history with this sort of aircraft from the wartime era. It’s an honor to be a part of it,” Cooper said.

According to the EAA website, the Berlin Express was first accepted into what was then the U.S. Army Air Forces in December of 1943. The airplane served out the war in a low-key role as an administrative aircraft, eventually being used as a trainer. It was eventually sold as surplus, and years later was restored, and appeared in the 1970 film “Catch-22”, starring Alan Arkin. Several years after the film, the plane was donated to the EAA Aviation Foundation, which fully restored it beginning in 1975. It eventually was moved into the EAA Aviation Museum’s Eagle Hangar, where it remained for the next few decades. Now, restored to its markings from the movie, along with the B-17, Aluminum Overcast, it tours the country.

EAA Galesburg Chapter 1643 vice president Aaron Repp of Maquon, who is a flight instructor at Jet Air in Galesburg, was among a group who flew on the B-25 on Thursday afternoon, and the highlight for him was climbing into the nose gunner position during the flight.

“The view is like nothing else, with the cornfields underneath you, and to be able to have that canopy to see out of is magical!” Repp said.

Cooper said he hopes to have a safe and successful weekend.

“We’re gonna make a lot of noise, and I hope that we help to draw bigger crowds to Galesburg for the Stearman Fly-In,” he said.

EAA Galesburg Chapter 1643 is sponsoring flights aboard the Berlin Express. The eight-seat aircraft (which you can move about in while in flight) will take you on an approximately 24 minute flight around Galesburg. Flights are $360 for EAA members and $400 for non-members. Ground tours are also available, $10 for individuals and $20 for families, with group rates available). Also for ground tours, children under 8 are complimentary with an adult ticket and all active military or veterans are free. Visit https://www.eaa.org/shop/flights/flytheB25.aspx for pricing and more information.