The story of the USS Croaker, the WWII submarine that got away 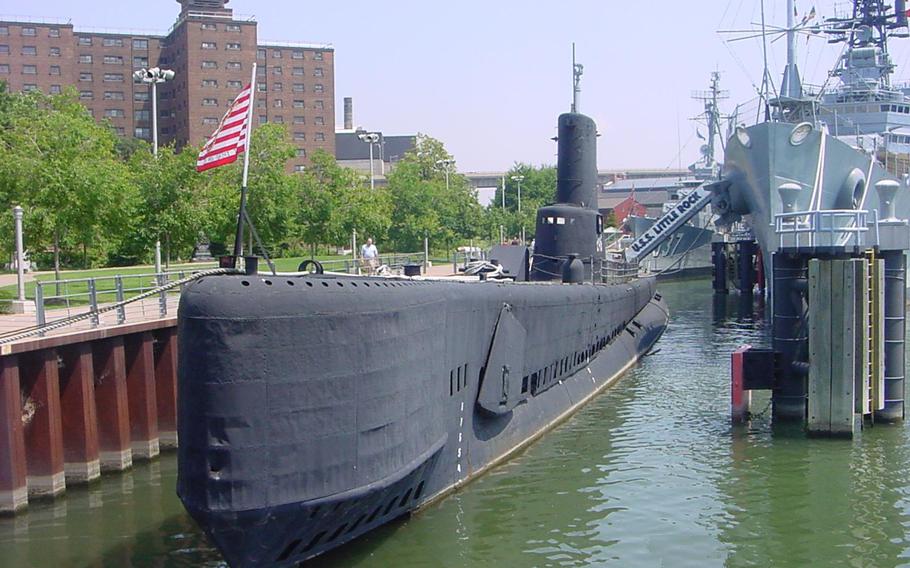 (Tribune News Service) — Editor's note: This story was drawn mostly from the files of the Submarine Force Library and Museum in Groton, Conn., and the archives of The Day.

On a crisp December day in 1987, a decaying submarine was pushed into the Thames River channel by tugboats and towed away by a Navy salvage ship.

That quiet departure closed the book on a saga unlike any in the seafaring annals of southeastern Connecticut. Most of the state’s submarine stories are triumphant, like Nautilus' North Pole voyage, or tragic, like the loss of the Thresher.

But this story ends in simple failure. It's the tale of a doomed attempt to preserve the past that was spurred by determination and undone by money.

"Does anyone know the name of the submarine that was on the river 30 years ago?" a reader asked. "I remember touring it but can't remember the name."

The name was USS Croaker, and it helped win World War II, sinking 11 enemy ships. But unlike its contemporaries, immortalized by their Pacific adventures, this submarine was defined by what happened to it later.

In Croaker's biggest battles, it didn't launch torpedoes but was a bystander to clashes over its fate as a museum ship.

The fanfare that attends the launch of a submarine was absent on Dec. 19, 1943, the day Croaker slid down the ways at Electric Boat's Victory Yard, where Pfizer is now. Wartime urgency had made launches commonplace.

EB was building submarines at a furious pace. The shipyard launched two in one day in October 1943, then repeated the feat a month later. Croaker's was the 25th and final launch of the year, which averages out to one every other week.

The following August, Croaker (SS-246) was seven days into its first patrol when a warship came into view off Japan. The crew fired torpedoes and waited. When an explosion was heard, the captain yelled, "We hit him!"

The grim sounds of a ship breaking up followed, and a blurry periscope photo shows the Japanese cruiser Nagara going down by the stern. As it disappeared, Croaker rushed off to avoid depth charges.

After the war it sat in Groton, out of commission, for five years. Then, with submarine technology advancing on several fronts, the Navy converted Croaker and six other Gato-class boats into "hunter-killers" for anti-submarine warfare, the wave of the future.

Croaker emerged from its 1953 conversion so changed it no longer looked like one of the "fleet boats" that had humbled the Japanese navy. Instead it became an artifact of a Cold War moment that was soon overtaken by the nuclear era.

Stricken from the Naval Register in 1971, Croaker seemed to have reached the end of the line.

But its next chapter hadn't even begun.

Frank Scheetz was born in West Virginia and never made it past sixth grade, quitting school to work in a coal mine. In 1942 he joined the Navy and did six submarine war patrols. When he left the service after 21 years, he stayed in Groton, where he had spent most of his Navy career.

With a blunt, no-nonsense demeanor and the kind of smarts that don't come from books, Scheetz, a contractor and developer, built houses, started businesses and made money. A shopping plaza on Route 12 still bears his name.

In 1972 Scheetz set his sights on a big prize: the New London train station, set to be torn down. He wanted to create a transportation center and made an offer for the building, which was rejected.

Meanwhile, someone else floated the idea of turning the station into a submarine museum. Scheetz made that plan his own and again tried to buy the building. He also offered to lease City Pier and dock an old submarine there.

New London was lukewarm on the idea, but a fire had been lit under Scheetz. His goal became a submarine tourist attraction to honor the Silent Service in which he had served. He formed a group called the Submarine Memorial Association and, in 1974, pitched his plan to Groton.

By then he had a specific boat in mind: Croaker, still in storage at the sub base.

Groton was receptive, but opposition to specifics came in from all sides. Environmental officials feared the impact of fill at the dock site. City voters nixed the sale of a building. Even the Submarine Veterans of World War II were against charging admission and worried Croaker would become an "eyesore."

"Anybody who objects to this memorial is throwing rocks at the American flag," Scheetz said.

When he chose a different site off Thames Street just north of EB, things fell into place. On July 27, 1976, Croaker was floated down the river to its new home. But the sub, on loan from the Navy, needed thousands of dollars' worth of work.

After nearly a year of scraping, painting and replacing parts, Croaker opened to the public in May 1977. For the first time, the Submarine Capital of the World had a submarine on display. That summer, 40,000 people visited, fulfilling the old sailor's dream.

World War II subs were a hot item. As the conflict receded and wartime boats were scrapped, the dwindling number of survivors became prized as portals to the past, even if they hadn't seen combat. A photo taken in Groton just after the war shows six decommissioned subs, including Croaker; five were destined to become memorials.

On July 4, 1969, one of the five, Drum (SS-228), was dedicated in Mobile, Ala., the first wartime sub open to the public. As the Navy jettisoned its remaining diesel boats in the early 1970s, many found second lives as museum ships. Today, 16 U.S. subs from the war remain, including six built by EB.

Groton was in the market early for one of them. In 1958 the town's chamber of commerce tried to secure Flasher (SS-249), which also appears in that postwar photo. The Navy promised it to the Subvets, but the group couldn't raise enough money. They still managed to get the conning tower before the boat was scrapped, and today it's the centerpiece of the National Submarine Memorial at Bridge and Thames streets.

Croaker had been open barely a month when Scheetz began another quest on Groton's behalf: Nautilus, the first nuclear submarine, which was near the end of its service life. His goal was to bring it home and dock it next to Croaker. But the Navy wanted it in either Washington or Annapolis, Md.

At a politically opportune moment, Scheetz assembled a save-the-Nautilus coalition that included power brokers as high up as the vice president of the United States. But he again faced opposition from the Subvets, who felt putting the landmark vessel next to Croaker would only line Scheetz's pockets.

"I'm getting damn tired of people saying that Frank Scheetz is trying to make money off the Nautilus," Scheetz said. But for the sake of unity he reluctantly declared his support for a berth near the sub base, where the historic ship ended up in 1985.

Scheetz helped win the battle for Nautilus, but it may have cost him the war for Croaker.

A stern letter Scheetz received in September 1986 listed six problems Navy inspectors had found with Croaker that "require your immediate attention," including a pronounced list to port. The words "severe deterioration" were used repeatedly.

The sticking point was ongoing replacement of the deck. Scheetz was using fiberglass; the Navy wanted teak, which was 10 times as expensive.

Since the Nautilus had returned, Croaker's attendance was down, and money was tight. To fund the repairs, Scheetz proposed renting the boat to the University of Connecticut as an off-season laboratory. But when the Navy greeted the idea with silence, he told them to come repossess their submarine.

Croaker's decade as a Groton tourist attraction ended on July 23, 1987, as tugs nudged it across the river to a temporary berth at the Naval Underwater Systems Center at Fort Trumbull. The previous day, Scheetz was asked if he would be there to watch the move.

With Croaker's fate up in the air, New London and Norwich briefly considered claiming it. Groton weighed a plan to put it on land near the National Submarine Memorial. Town officials were still talking about that in December when a salvage ship towed the sub to Virginia for winter storage. But when the projected cost of the land berth doubled, interest dried up. Six months after Croaker had departed, Groton gave up trying to get it back.

"We already have our memorial," a town councilor said. "I don't think that having more is necessarily better."

That's the end of the story but not the end of Croaker. The Navy, which might have used the boat for target practice, instead found a taker.

In late 1988, Croaker was towed to the Buffalo and Erie County Naval & Military Park in Buffalo, N.Y., where it was fully restored. Alongside a cruiser and a destroyer, it's been there uneventfully ever since.

These days, the old submarine is well past its time in combat, in the Pacific and especially in Groton.