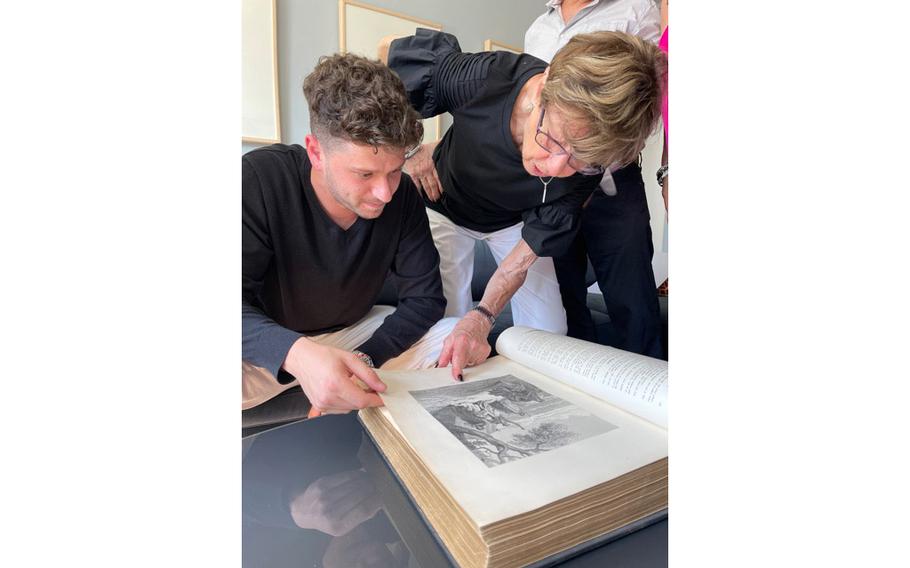 Jacob Leiter and his grandmother Susi Kasper Leiter look through the Leiter family Bible from 1874 for the first time in New York City in June. (Steve MacDiarmid)

A father and son in Oberdorf, Bopfingen, Germany, in 1990 were renovating the home they'd just bought when they came across something unusual: a chest hidden behind a double wall in the attic.

Tucked inside the chest was a large, gilded Jewish Bible that looked like it had been carefully placed there.

It was heavy, about 22 pounds, and almost 30 inches long and three inches high. The words "Die Heilige Schrift der Israeliten" — the Holy Scriptures of the Israelites — were embossed on the front.

It seemed valuable and important, and the son held onto it for nearly 30 years. But in April 2017, he decided to sell it on eBay to an art historian for about $75.

The Bible, it turned out, was part of the legacy of Eduard and Ernestine Leiter, a Jewish couple from Stuttgart killed by the Nazis during the Holocaust.

According to the U.S. Holocaust Memorial Museum in Washington, the Leiters' story was a common and tragic one: The Nazis forced them to move to Oberdorf, Bopfingen, to live with seven other Jewish families. In August 1942, the Germans sent the couple to Theresienstadt, a ghetto and concentration camp outside Prague.

Before the Leiters left the home in Oberdorf, they hid all their valuables and personal items — including their jewelry, some letters and an 1874 edition of the Jewish Bible — in hopes of returning and retrieving their keepsakes. 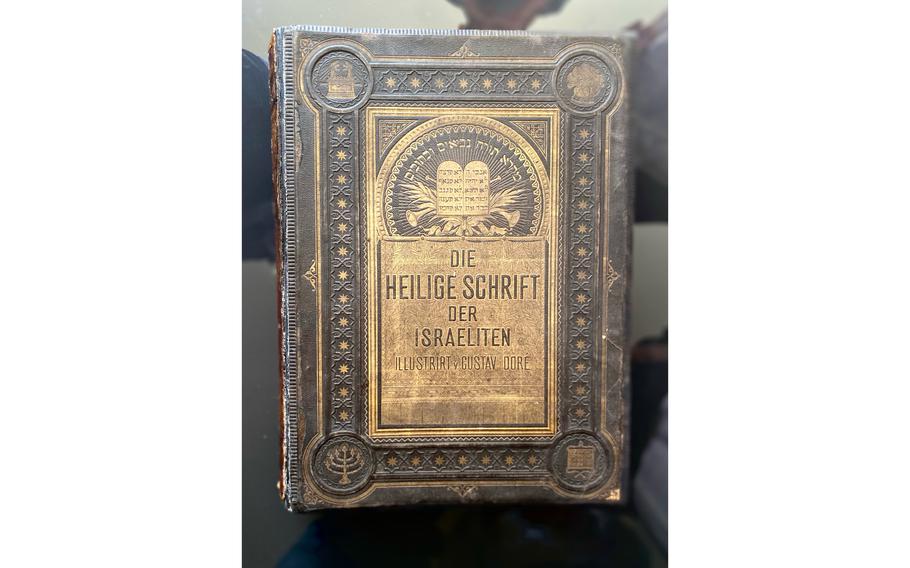 The Leiter family Bible from 1874 that was hidden in an attic in Germany for decades. (Courtesy of Jacob Leiter) 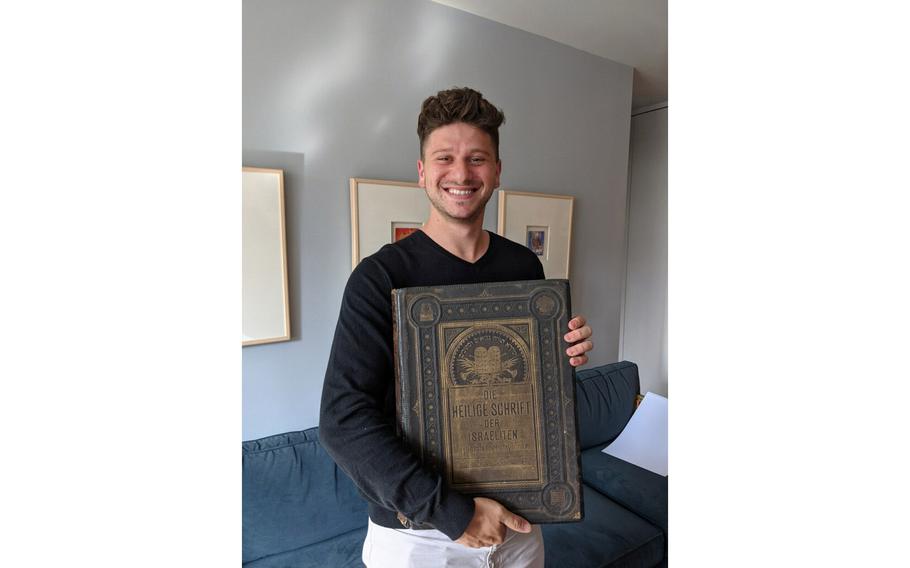 The Leiters were sent to Treblinka, the infamous Nazi extermination camp in Poland where an estimated 925,000 Jews were killed, in addition to Poles, Roma and Soviet prisoners of war. The Leiters' son, Sali, was the lone survivor in the family.

That's when the family story becomes remarkable: Sali's descendants — who did not know much about him — came to possess his parents' Bible. It landed this summer on their doorstep in New York.

For 50 years, the Leiters' heirlooms were left in Germany, hidden in the attic of the home, only to be discovered during the 1990 renovation.

When the Bible went up on eBay, it caught the eye of artist and art historian Gerhard Roese, as he believed it had historical significance. It contained illustrations from Gustave Doré, one of the most prolific and successful book illustrators of the late-19th century.

Roese donated it to a local synagogue close to the house where it was found so it could be preserved and protected. Then the search began to reunite the artifact with its intended heirs.

It took nearly four years, but in February, a man in Europe working on behalf of the U.S. Holocaust Memorial Museum heard about the Bible.

Word of it soon reached Jo-Ellyn Decker, a research and reference librarian at the museum. It became her mission to find out what happened to the descendants of the Bible and return the sacred text to its rightful lineage.

The museum regularly helps people figure out what happened to their ancestors during the Holocaust, but finding an item to repatriate to living descendants "is almost unheard of," Decker said. Many books were burned or repurposed by Nazis at the time.

Luckily for Decker, there was a clue inside the Bible: a small postcard that confirmed Eduard Leiter was the owner.

She said she did not have high expectations of finding living relatives of the Leiters.

"During the Holocaust, entire Jewish families were murdered," Decker said. "So, the thought of finding someone alive today that would be related to someone who was killed in Treblinka ... is pretty unusual."

Decker started digging through every archive and search engine she could. She found that Sali, the lone Leiter who survived the Holocaust, had changed his name to Charles and moved to the United States. Charles had a son named Max, who died and was featured in an obituary in the New York Times in 2008. Max had two children and three grandchildren.

Decker was hopeful that she could track down one of them.

She found one of the grandchildren, Jacob Leiter, on LinkedIn and immediately wrote a message explaining why she was trying to reach him. It began: "I apologize for the 'out of the blue' correspondence."

At his home in Long Island, Jacob Leiter opened his inbox on LinkedIn. He was used to getting messages from recruiters and other contacts, but this note was different. He recognized the names of his grandfather and great-grandfather on the screen. It looked legitimate to him, so he messaged Decker back for more information.

Then, he called his grandmother, Susi Kasper Leiter, who herself was a child Holocaust survivor.

"At first, I was kind of shocked," said Jacob Leiter, 27, about the Bible. "We really didn't speak too much about my great-great grandparents."

Over the next four months, Jacob Leiter talked with Decker and the caretakers of the Bible in Germany. He learned more about his great-great-grandparents' history for the first time, and so did his grandmother. They both knew a bit about Eduard and Ernestine, but it was the first time they heard such a full account.

The letters accompanying the Bible inside the chest were discarded long ago, and it is unclear what happened to the jewelry, Jacob Leiter said.

It came time to figure out how to return the keepsake to the Leiter family in New York City. If it was sent through the mail, there was a chance it would get lost on its way, Jacob Leiter said, so it would have to be sent with a person. And international travel was complicated because of the coronavirus pandemic.

He delivered the heirloom to Jacob Leiter and his grandmother at her apartment in Manhattan. They were stunned by both its beauty and large size.

As she held it, Susi Kasper Leiter thought of her husband, Max, who would have felt enormously honored to see it in person. But as a Holocaust survivor herself, she said having an artifact from generations ago in her hands was stunning.

"I just think that with all the terrible terror and inhumanities in this world, I can't believe that I have such pleasure and such magic that I should live to see something that remains of the Holocaust that is good — and that's the Bible," said Kasper Leiter, 94. "There's nothing else good to remain from there."

For Jacob Leiter, holding the Bible that once was in his great-great-grandfather's hands was an incredible feeling, but it was especially meaningful to go through the process with his grandmother.

"I kept saying throughout the whole process how lucky I am that I have my grandmother to experience this with," Jacob said. "Just doing this in its entirety with her is something I'll remember forever."