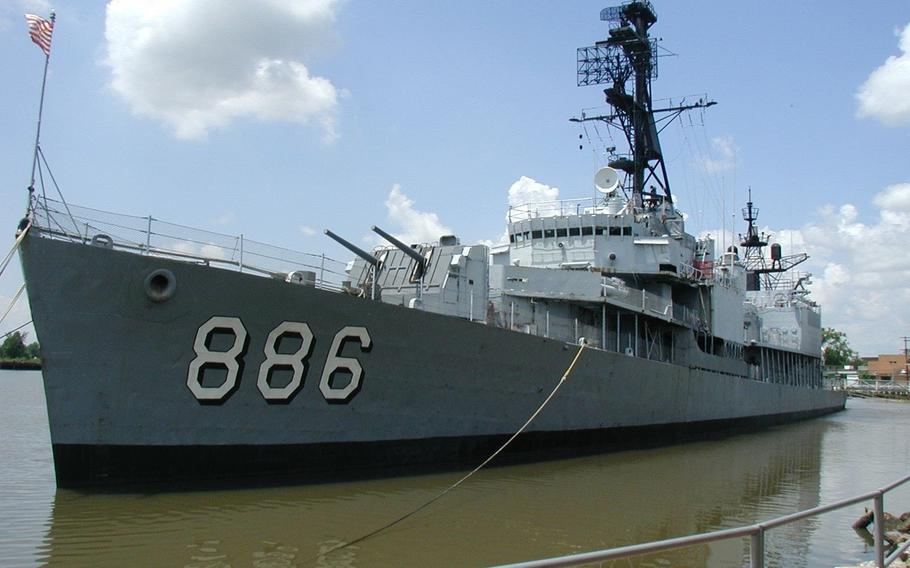 The USS Orleck will soon begin a journey from Lake Charles, La., that could eventually bring it to Jacksonville. (Jacksonville Historic Naval Ship Association/TNS)

JACKSONVILLE, Fla. (Tribune News Service) One of the most-decorated post-World War II ships in U.S. Navy history could soon find its way to a berth in the St. Johns River in downtown Jacksonville as a museum ship.

The City Council voted 17-0 this month to approve a development agreement that would allow the retired vessel USS Orleck to be docked at the riverfront Shipyards property to serve as a naval history museum. It's another step in the efforts to bring a floating museum to Jacksonville, but first the ship would have to pass a drydock inspection and survive a 10-day trip to its new home.

The ship now sits at a berth on the Calcasieu River in Lake Charles, La. Ron Williams, executive director of the USS Orleck Naval Museum, said the ship doesn't really fit in the busy industrial port of Lake Charles, which took heavy damage last year from Hurricane Laura. The ship broke loose from its moorings during the storm but suffered only minor damage.

"The ship was upright and not listing," Williams said. "She's a tough ship." 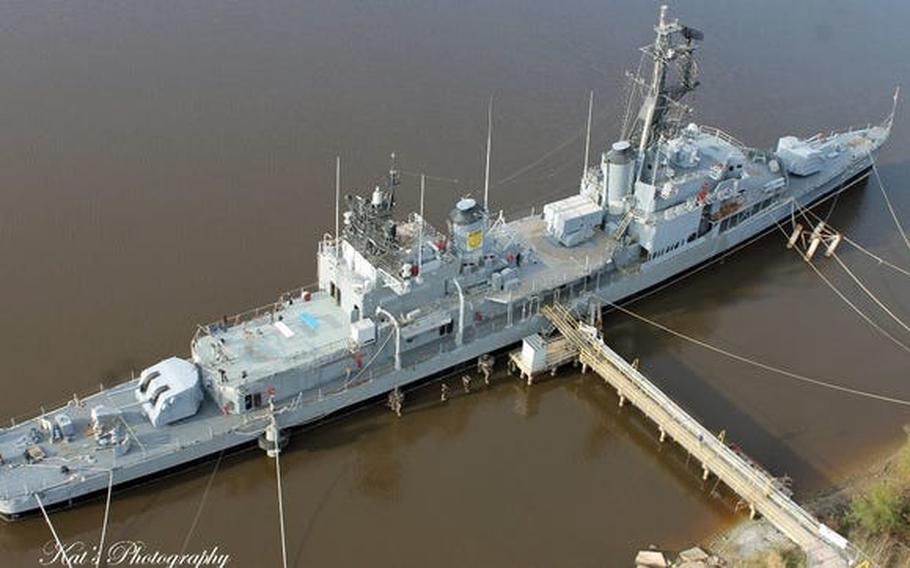 The USS Orleck was launched at the end of World War II and served the U.S. Navy during the Korean and Vietnam wars. (Jacksonville Historic Naval Ship Association/TNS)

Plans call for the ship to be towed 16 to 18 hours from Lake Charles to Port Arthur, Texas, where it will be put into drydock and inspected to see if it is seaworthy enough for a 10-day trip from Texas to Jacksonville. Williams said he expects the Orleck to pass the inspection, but he can't be certain about that.

"You just don't know," he said. "We can do the best that we can but we're not fortune tellers. We tended to the ship as best as we could."

A retired Navy captain and a marine surveyor will lead the inspection team.

The Jacksonville Historic Naval Ship Association, the organization behind the plans to bring the Orleck to Florida, has budgeted about $240,000 to tow the ship to Texas, have it inspected in drydock and make necessary repairs, said Justin Weakland, vice president of the museum association.

Williams said he hoped to see the Orleck on its way to Texas sometime in August. There is no timetable for when it could arrive in Florida or open to the public, but Weakland said his organization would love to have the Orleck in Jacksonville by Veterans Day in November.

If the ship fails the seaworthiness inspection or the costs are deemed to be too high, the association could back out of the deal. The ship would probably then be scrapped or turned into an artificial reef. If it passes, it would stay in drydock three to six weeks for painting and repairs, then set off for its new home in Florida. 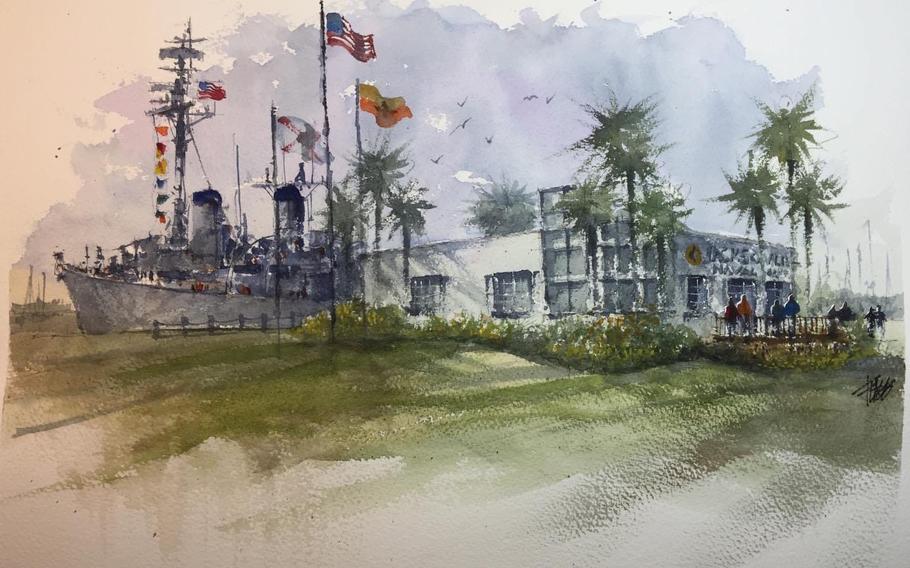 If the ship comes to Jacksonville, plans call for it to be berthed at Pier 1, the westernmost pier on the Shipyards property. A pierside building housing a ticket office, gift shop and restrooms would be built, Weakland said. But those plans are on hold while the Downtown Investment Authority finalizes the larger plan for the Shipyards.

The 2,350-ton Orleck would serve as a floating museum focusing on the U.S. Navy Cold War experience. It could also be used as an education resource, a gathering place for military conventions and crew reunions and possibly for overnight stays by Scouts and other groups.

Weakland said the group is planning on a total budget of about $2.6 million for the overall project. Money would come from a historical grant, a line of credit and donations. The organization is accepting donations at jaxnavalmuseum.org/donate.

'Gray Ghost of the Vietnam Coast'

The ship has a long and colorful history. It's a Gearing Class destroyer that was built in Texas and launched in May of 1945, near the end of World War II, at a cost of $6.3 million. It operated as part of the Seventh Fleet during the Korean War, then underwent extensive renovations under the Navy's Fleet Rehabilitation and Maintenance program in 1962.

During the Vietnam War, it earned the nickname "Gray Ghost of the Vietnam Coast" and fired more rounds in support of ground troops than any ship in the Navy. The ship earned 18 Battle Stars, four during the Korean conflict and 14 during the fighting in Vietnam. 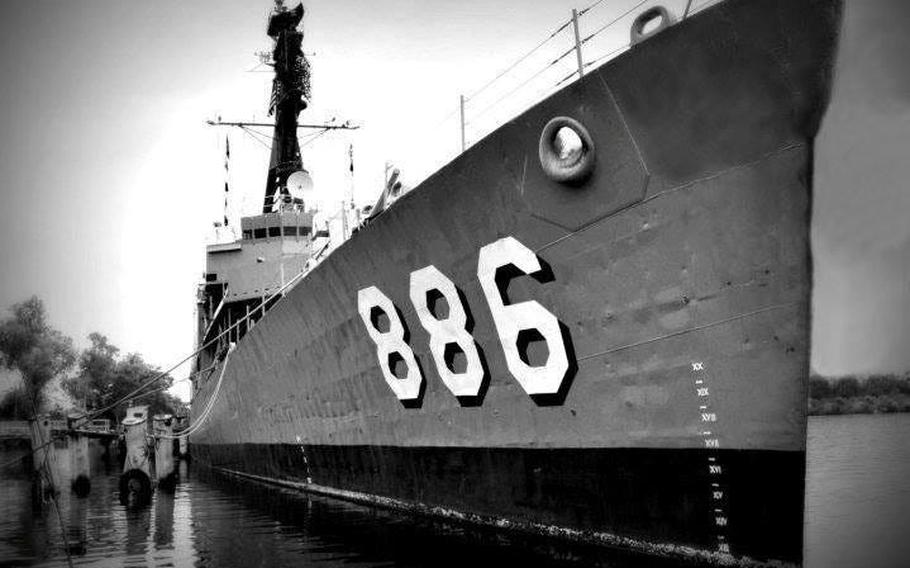 During the Vietnam War, the USS Orleck earned the nickname "The Gray Ghost of the Vietnam Coast." (Jacksonville Historic Naval Ship Association/TNS)

It later served as a training ship and appeared in the TV miniseries "Winds of War." In 1982 it was transferred to the Turkish Navy, where it was renamed the TCG Yücetepe, serving until 2000.

The Turkish Navy donated the ship to the Southeast Texas War Memorial and Heritage Foundation. Weakland said that made the ship especially attractive to the Jacksonville group, because it no longer belonged to the U.S. Navy.

Proposals to bring the USS Adams to Jacksonville as a museum ship fell apart in 2018 when the Navy rejected plans to turn over the ship. Williams explained that the Navy typically retains title to museum ships and places restrictions on how they can be used. Those restrictions don't apply to the Orleck.

The ship is 390 feet long, which would be considered small by modern Navy destroyer standards. Weakland, who served 20 years in the Navy, said he was surprised by how small the ship was when he visited it in Lake Charles.

"My destroyer was much bigger and faster," he said. "When I visited it in Lake Charles, it was like stepping back in time to World War II when my grandfather served."

In its museum configuration, the ship only draws about 10 feet of water, making it ideal for the St. Johns River location, Weakland said.