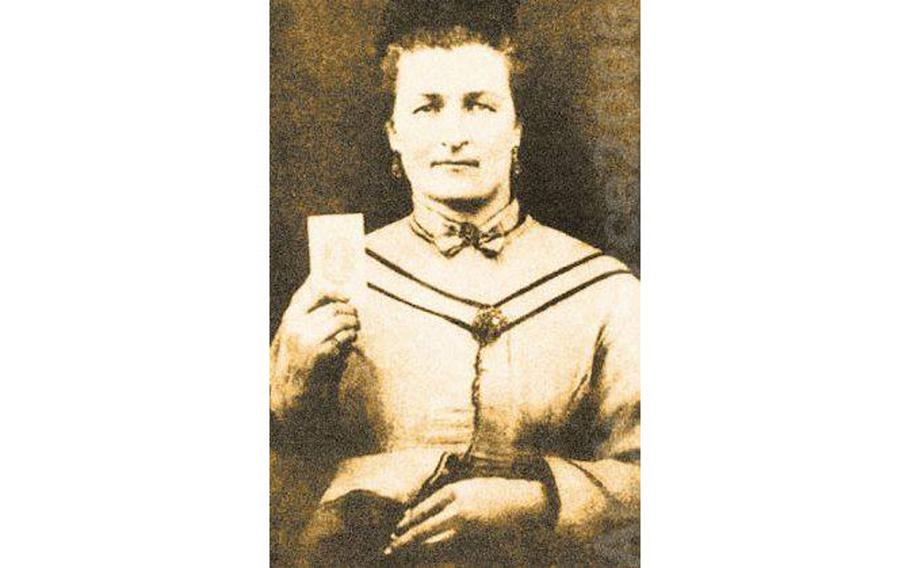 On March 20, 1862, Malinda Blalock disguised herself as a young man and enlisted in the Confederate army. (NC Department of Natural & Cultural Resources Facebook)

(Tribune News Service) — Decades before Bonnie and Clyde terrorized the U.S., there was Keith and Malinda Blalock — a couple of Confederate deserters who wreaked havoc on the mountains of Western North Carolina as Union guerrilla fighters during the Civil War.

Malinda Blalock posed as a man to enlist alongside her husband.

According to historical records, the pair weren’t separated until her death in 1901. Keith Blalock died 108 years ago on Aug. 11, 1913. Their renegade life at the base of Grandfather Mountain is detailed in state records and at the Avery County Historical Museum.

“Murder, robbery and plundering became their calling cards,” the museum said of the Blalocks after they returned from a short-lived stint in the Confederate Army. “And the entire time Malinda was by her husband’s side.”

Keith was 10 years older, and their families had been feuding for 150 years before the pair married in 1856.

Malinda and Keith were Unionists, the N.C. Department of Natural and Cultural Resources said. But Keith’s fear of being drafted prompted him to enlist in the 26th North Carolina Troops for the Confederate Army in March 1862.

His plan was to desert and join Federal troops as his unit moved north, according to the Ohio State University’s eHistory. But he wanted Malinda to be safe amid the town’s secessionists, so he made sure they saw him join with the Confederacy.

His wife, however, had other plans.

Malinda cut her hair short, put on her husband’s clothing and followed him to war by enlisting under the name Sam, the North Carolina History Project said.

She is one of two women known to have served in the Confederate Army and North Carolina’s only female Civil War soldier.

“Sam” was described as a “good looking boy aged 16, weight about 130 pounds, height five feet four inches.” He was thought to be Keith’s little brother.

Historical record differs as to whether Keith knew of his wife’s intentions. According to the Department of Natural and Cultural Resources, the “romantic version” of events is that “Keith looked over at the private walking next to him and did a double-take when he recognized his wife.”

Fellow soldier and Confederate recruiter James Moore was one of the only people who knew Malinda’s secret, The Herald-Dispatch reported. In an article for The Morning Post newspaper in 1900, he wrote that the Blalocks confided in him in Salisbury as they made their way east to Kinston to join their regiment.

Moore had previously commented that Sam “resembles Keith’s wife so much,” and the pair believed he had figured them out.

“They concluded it was best to make me their confidant so I would not tell anyone about it,” Moore wrote in the article. “I never told anyone about it except my brother-in-law, Isaac N. Corpening, who was also in the Company.”

He said no one ever suspected the true identity of Sam Blalock, who “drilled and did the duties of a soldier as any other member of the company.”

There are conflicting tales as to how the Blalocks came to leave the Confederate Army.

In one version of events as told by the North Carolina History Project, the couple served only one month in the 26th regiment before Malinda was injured in a firefight. She reportedly had to undergo surgery to have a bullet removed from her shoulder, and the surgeon discovered she was a woman.

Keith, wanting to be with his wife after she was discharged, “went into the forest, stripped off his clothes, and rolled around in poison ivy,” the North Carolina History Project said.

His skin became “inflamed and covered with blisters,” and he told doctors it could be a “recurring and highly contagious disease.”

They feared an outbreak, and Keith was discharged.

But according to NCPedia, it was Keith who was first discharged with a poison oak infection after his unit was sent south — not north — and he realized his plans to desert wouldn’t come to fruition. Malinda revealed she was a woman to follow him.

Regardless, the pair returned to Grandfather Mountain, where they were joined by other deserters, according to NCPedia.

Keith began working for the Union Army as a recruiting officer, the Avery County Museum said, and the couple eventually “became the ‘Bonnie and Clyde’ of the western North Carolina mountains terrorizing both Unionists and Confederates.”

The mountains were close to Union supporters across the border in Tennessee, who frequently ransacked the area, according to the museum.

Keith and Malinda Blalock were among those raiders for the Union Army, the North Carolina History Project said.

When the Civil War ended, the couple became farmers in the Linville area, which is now Avery County, according to NCPedia.

They are buried side by side in Montezuma Cemetery in Avery County.