Military Ocean Terminal at Bayonne in NJ, designed to withstand a bombing, is imploded 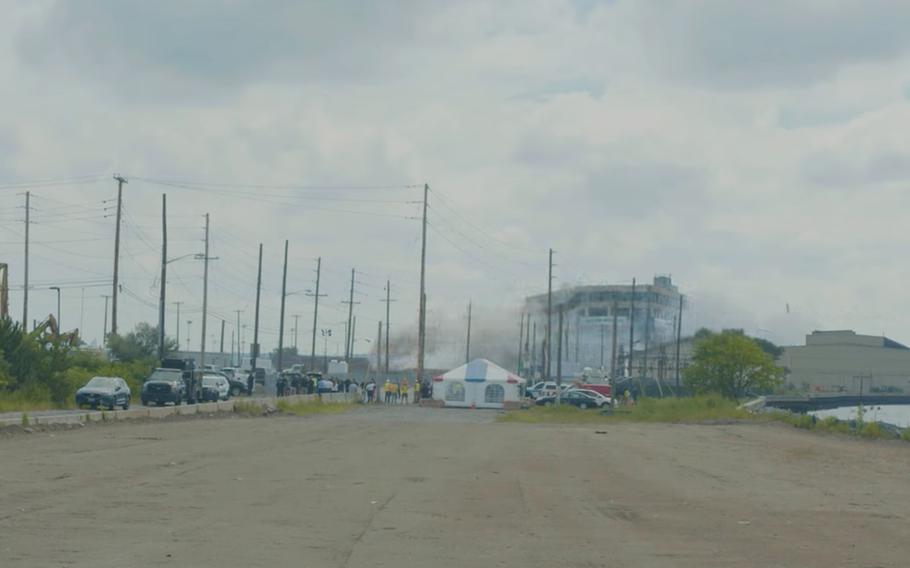 The former Military Ocean Terminal at Bayonne in New Jersey was demolished Sunday, Aug. 8, 2021, to make way for a UPS distribution center. (Screenshot from YouTube)

The two structures demolished Sunday were built during World War II, standing six stories tall and totaling 1.5 million square feet. Originally designed to withstand a bombing, the military operated MOTBY from 1942 to 1999, first as a Navy supply depot until 1967 and then as an Army base.

The implosion was the culmination of several years of prep work at the site. The buildings’ removal makes way for a large UPS distribution center to be built in their place.

“This is the promise we made, was to build the city, develop the city, and bring jobs back to the city, and this is just the beginning,” Bayonne Mayor Jimmy Davis told NJ Advance Media ahead of the implosion. “And today is just the one day that we get to sit and enjoy blowing something up.”

The 153-acre site was purchased by East Rutherford-based Lincoln Equities Group in 2018, and work has been underway since. The site needed more than 1 million tons of clean fill to raise it above flood levels, mold remediation, and the structures that made it bombproof needed to be removed.

“For Bayonne, I believe that this is a momentous moment, to see advancement and the redevelopment of the peninsula,” LEG President Joel Bergstein said, citing the 1,000 construction jobs the project will create and the 1,800 UPS jobs to follow.

A small crowd of invited guests gathered under a tent set up between the half-demolished building and the newly built condominiums, sipping mimosas and milling about before the implosion Sunday morning.

A warning signal went off at 10:29 a.m. and the giddy crowd fell mostly silent.

A series out loud booms rang out, and a flock of geese scattered from their perch on the land into the water. A brief moment of silence followed, and the once bomb-proof building came cascading down like liquid, dissolving into a cloud of smoke.

“That was amazing! It worked! It worked!” Bergstein cheered, high-fiving those around him as they whooped and hollered.

But for some, the day was tinged with sadness.

Hasmik “Jasmine” Hammond and her husband, Thomas, worked in the building together for decades, with offices on the top floor. They both retired when the building closed in the 90s after 40 years of work, and were in the small, invited group on Sunday to watch it come down.

“It’s very sad. I know it’s progress, but we spent a lot of time there,” Hammond said.