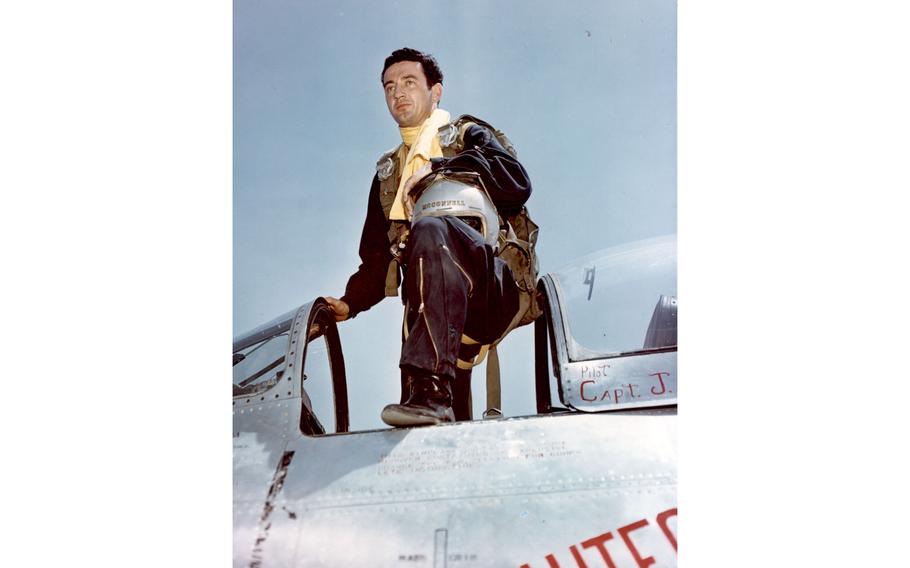 Nearly 70 years after McConnell returned to Apple Valley after shooting down 16 MiG-15 fighters during the Korean War, the pilot is now honored with a sign posted along Highway 18.

"Capt. McConnell was a remarkable man. He was based at George (Air Force Base) in Victorville and lived in Apple Valley," said Holland, who once served as editor of the Daily Press.

McConnell's sign is located on the south side of Highway 18, just past Mojave Narrows on property owned by the Lewis Center for Educational Research, Holland said.

"Don Holland reached out to us with the idea of posting a sign that would increase public knowledge of Capt. McConnell and all that he accomplished," said Lisa Lamb, the President/CEO of the Lewis Center.

The Lewis Center staff helped install the sign, according to Lamb, who commended Holland for his efforts to teach future generations about McConnell.

In a written statement, Trish McConnell, the captain's eldest daughter, called her father a "great patriot" who protected freedom in the U.S. and other countries.

"It is refreshing that people are bringing back his memory. Our freedom is the most cherished thing we have," Trish McConnell said. "God bless America."

Holland also paid for 20 vinyl banners highlighting McConnell's life, which were given to schools across the High Desert.

Apple Valley Unified School District spokesperson Zoee Widener told the Daily Press Friday that some of the banners were given to Vanguard Preparatory School, Granite Hills High School and the Phoenix Academy.

Holland is writing a biography of McConnell, according to Lamb, who said the school is making efforts through its contacts at NASA to reach former astronaut and fighter pilot Buzz Aldrin about writing the book's forward.

"I have been researching Capt. McConnell since April 26, 2019, when I visited his grave on a whim, although I did not intend to write a book at that time," Holland said. "The more I learn about him, the more I am amazed at how remarkable and inspiring he was."

Holland said he hopes to finish the draft of his book in the spring of 2022. The tentative title is "McConnell: The Untold Story of America's No. 1 Jet Ace and His Lessons for Your Success."

He also said he is saddened that there no school, street or park "named after this national hero in his adopted home town" of Apple Valley.

McConnell remains one of the most accomplished American fighter pilots thanks to his Korean War exploits that made him the first triple jet ace in U.S. history.

A native of Dover, New Hampshire, McConnell was credited with shooting down 16 enemy aircraft while flying F-86 Sabres, according to the USAF.

McConnell was awarded the Distinguished Service Cross, the Silver Star and Air Medal for his actions in aerial combat.

During one aerial encounter, McConnell's plane was struck by Soviet fire. He returned fire and shot down the aircraft before bailing out over the enemy-controlled waters of the Yellow Sea.

The following day, the pilot took to the skies and shot down his ninth MiG of the Korean War, according to the National Museum of the United States Air Force.

During another air battle, McConnell shot down two MiGs, earning him triple-ace status with 15 kills. During another mission that afternoon, he shot down his 16th and final MiG of the war.

After returning to the U.S., McConnell was stationed at George AFB, where he continued to fly F-86s. In 1954, he was temporarily assigned to the service testing program of the newest F-86.

A national hero, McConnell met President Dwight Eisenhower and embarked on a cross-country tour. He appeared on radio and TV shows, and met many Hollywood celebrities.

On Aug. 25, 1954, McConnell died in a crash while testing an F-86H at Edwards Air Force Base. He is buried near his wife, Pearl "Butch" McConnell, at Victor Valley Memorial Park and Mortuary in Victorville.

In 1955, Warner Bros. Studios released, "The McConnell Story," which dramatized the pilot's life. The film starred Alan Ladd in the lead role and June Allyson as McConnell's wife.

The Air Force's F-16 Viper Demo Team performed a heritage flight over the Apple Valley Airport during the airshow, the Daily Press reported.

"We planned to do an exhibit about McConnell at the school last year, but COVID-19 delayed those plans," Lamb said. "Our cadets participated in honoring the captain during the Apple Valley Air Show two year ago."

Last year, Navy Veteran Kristin Chaffin, of Victorville, was selected as the recipient of the Capt. Joseph McConnell Jr. Scholarship, which is privately funded and awarded through the VVC Foundation.

Lewis Center founder and former CEO Rick Piercy, who is chair of Apple Valley's Historical Advisory Committee, said the group is looking at other ways to honor McConnell.

Victor Valley residents in 1953 raised money to build a three-bedroom home for the McConnell family on the north side of Highway 18, across from Lions Park in Apple Valley.

During a celebration to honor McConnell's return in June of that year, Apple Valley Chamber of Commerce President Zeke Cornia presented McConnell with the key to the town and plans for a new 1,280-square-foot house, according to previous reporting.

As part of the celebration, a mile-long parade of vehicles followed the McConnells as they were driven through the town and into Victorville.

The parade stretched back to the Apple Valley Inn, where the McConnells — including their children Kathleen, Joseph and Patricia Anne — posed for photos.

"The construction project began Wednesday, Aug. 5, 1954 and was to be completed in 5 days, by the following Sunday, to set a world record," Holland said. "There was a billboard along Highway 18 directing visitors and reporters to the construction site, almost directly across Highway 18 from Lions Park. The original house was 1,280 square feet, although I believe it was later enlarged."

The Apple Valley Lions Club served as point of contact for collecting public donations to build the home. The fundraising goal was $5,000, with local residents donating as little as $1 and up to $300, Holland said.

Some of the contractors — including Bennington & Smith and V.C. Hove — donated labor and materials, said Holland, who suspects that Apple Valley founders Newton T. Bass and Bud Westlund kicked in the remainder.

"Crews worked around the clock. Flood lights were brought in. Food trucks came in to feed the workers," Holland said. "At 4 a.m. on Aug. 7, the fire house on Highway 18 blew the siren to signal to Apple Valley residents that the house was finally done. The public was invited to tour the house during several evenings."

The McConnells then moved into their home, which was built in 45 hours for $16,000, the San Bernardino Sun reported.

After McConnell's death, his wife and the children lived in the house for a while before moving to Florida and Massachusetts, where Pearl McConnell was from, Holland said.

"While they loved Apple Valley, the painful memories were too much," Holland said.

Pearl McConnell eventually moved to the Palm Desert area, where she lived until her death in 2008.