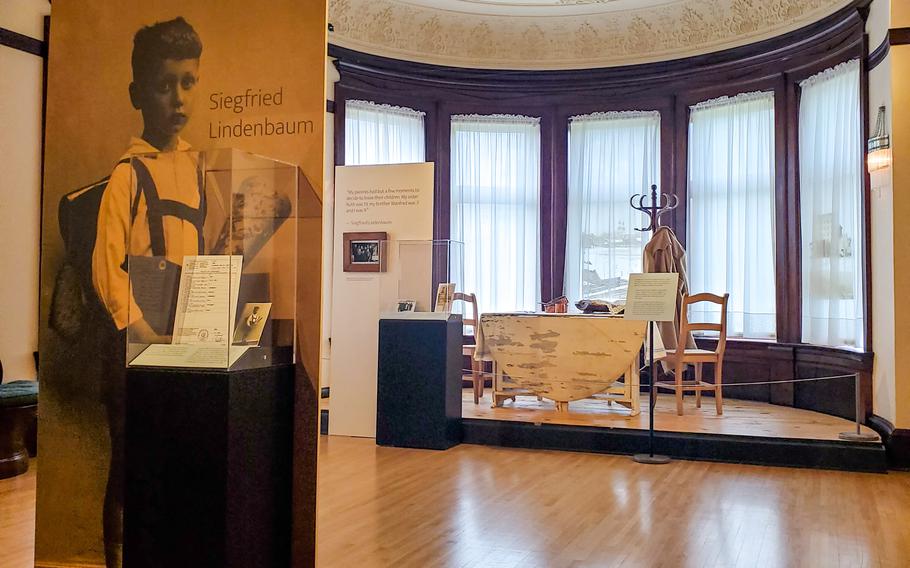 MINNEAPOLIS (Tribune News Service) — Benno Black is the last known person in Minnesota who participated in a Jewish children rescue effort — called kindertransport — at the brink of World War II.

In July 1939, he boarded a train with other Jewish children bound for England, carrying a leather suitcase with his school notebook, pressed flowers from his mother, family photos and a few other mementos. He was 13.

Eighty-two years later, contents of that suitcase and Black's poignant journey are part of a new exhibit at the American Swedish Institute about the rescue effort that moved 10,000 Jewish children to safety, mostly in England but also Sweden and other nations.

Black, now 95, and his wife, Annette, last week peered into the glass display cases holding distant memories, grateful that his personal story has been transformed into public history.

"Everything looks good," said Black, eyes resting on the well-worn suitcase. Above stood a large photograph of him before he left his family forever — a confident boy in a crisp white shirt, tie, and shorts.

An estimated 1.5 million children were killed by the Nazi regime during World War II. Black was among the fraction that escaped in 1938 and 1939 in a collaborative rescue operation led primarily by the British government, Jewish agencies and resettlement groups.

The stories of kindertransport offer one more prism for understanding the Holocaust's devastation on families, said Susie Greenberg, associate director of Holocaust education for the Jewish Community Relations Council of Minnesota and the Dakotas, one of the exhibit's sponsors.

Black "was alone, he was an only child," said Goldberg. "These things are more than a time capsule of his life. There's a heart that beats here."

As public knowledge of the Holocaust declines and misinformation spreads, organizers said, it's critical that stories such as Black's be shared. The significance of kindertransport is magnified today "as the world faces a global refugee crisis that includes tens of millions of children," said Rabbi Alexander Davis, of Beth El Synagogue in St. Louis Park, an exhibit partner.

Black recalls having a happy childhood in Breslau, Germany. His father Martin owned a drugstore and his mother Helene was a homemaker. His great-grandfather was distinguished Jewish historian Heinrich Graetz, whose portrait hangs in Black's St. Louis Park home.

Black's secure family life flipped upside down in November 1938 following Kristallnacht, two days in which Nazis looted and destroyed Jewish homes, synagogues and businesses, including his father's store. His little school notebook, now on display, reveals his last day in class was Nov. 9, the day before the rampage. When he showed up for class the next day, his teacher told him: "No school today. Go right home."

The Gestapo arrested his father and released him weeks later, a weakened man. His parents desperately wanted to emigrate to Minnesota, where her brother lived, but they couldn't get a visa. Then they learned about Britain's kindertransport program and registered their only son.

Black last saw his parents in July 1939. His father and uncle accompanied him to the train station while his mother and aunt — too distraught to see him off — waved at the train as it crossed a viaduct.

"I was feeling a little scared, a little excited," said Black. "I thought I'd see my parents again."

After stopping in Berlin for the night, the train full of children headed to a port in Holland where they boarded a ship to Harwich, England. Upon arrival, the children were divided into groups and Black found himself on a bus to a former military camp near Ipswich, where he lived for about nine months.

Black and two other boys were sent to live with an English couple in Northampton, where he took a job in a leather factory and worked to improve his English.

Early on, Black said, he received some letters from his mother, but they eventually stopped. He learned his father died about four months after he left home. For decades, he had no information on his mother.

As the war intensified, Black joined the British Army to serve the country that saved him. "Everyone was joining. I thought I should too," he said.

Black spent 2-1/2 years in the Army, serving in France, Spain and northern Africa. After the war ended he set his eyes on Minneapolis, where his uncle lived.

"I remember my uncle meeting me at the train station," Black said. "He was single, and he took me to a family that I could live with."

In the next few years Black got married, bought a home in St. Louis Park and worked in merchandise distribution for Minnesota-based retailers Salkin & Linoff. The couple had two children, Mark, of Minneapolis, and Helene Hornum of Columbia, Md.

The old suitcase lovingly packed by his mother sat unopened on a shelf in his basement for years, until Greenberg and museum staffers interviewed Black and asked repeatedly if he had any kindertransport mementos. Finally Black went downstairs and brought up the dusty suitcase.

"It shocked everyone," said Ingrid Nyholm-Lange of the American Swedish Institute. "These are moments historians live for!"

A recent visitor to Black's home found on the sofa a newsletter from the New York-based Kindertransport Association, which works to unite survivors and educate the public. Black is the sole member in Minnesota, said association President Melissa Hacker. Nationally, about 300 survivors belong to the group, said Hacker, though it's unclear how many others are still alive.

While Black is the only surviving Minnesotan whose journey is told in the museum, the stories of two men whose daughters live in Minnesota are also featured: Kurt Moses, father of Twin Cities artist Sandy Baron, and Siegfred Lindenbaum, father of Beth Gendler, executive director of the state chapter of the National Council of Jewish Women.

Moses, who lived in Milwaukee, rarely spoke about his time in two children's camps in France, said Baron, but there were hints of his loss. She recalled seeing a photo of his mother that he had enlarged, with a Post-it note asking the enlarger to do their best because "I haven't seen my mother since I was 10 years old."

The retired chemist from Chicago began writing poems, several of which grace the exhibit's walls. One stanza ends:

"They came and took us to the railway station/ We were on the train all night/ When I woke up we were in Poland/ But my childhood I left it behind."