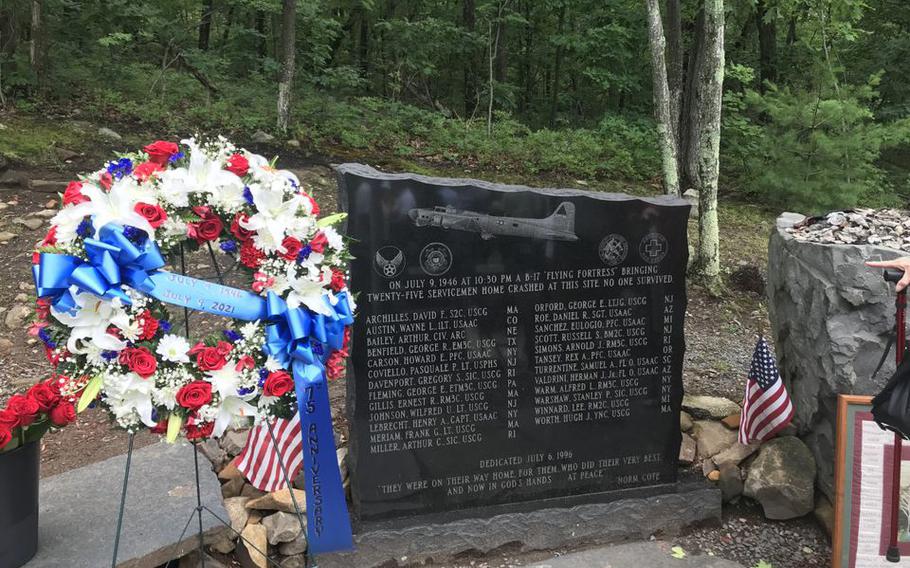 (Tribune News Service) — On the evening of July 9, 1946, a group of men flew together toward Long Island from Goose Bay, Labrador, after serving in a long war. The Coast Guard and Army Air Corps troops, most in their late teens and early 20s, and a couple of civilians rode in a converted B-17 bomber toward Mitchell Field, there to be discharged and sent home. Their war was over.

At about 10:20 p.m. that night, the plane was cleared to land at Westover Field in Chicopee for a quick scheduled stopover. The four-engine B-17 had been experiencing engine problems and had been circling over Holyoke for almost two hours when it lined up on the runway several miles out and began its descent.

As it made its landing run the plane clipped small trees at the summit of Mount Tom, crashed into a rock outcropping and exploded some 300 feet below the top of the ridge. All 25 men aboard were killed.

On the morning of July 10, 2021, more than 100 people stood at the very spot the plane crashed to pay homage to those on board the plane that night — many of them family members the dead never knew.

Saturday marked the 25th anniversary of a memorial set on the side of Mount Tom in July 1996.

Organizing Committee member Rick Lee said the push for the memorial started with Norman Cote of Holyoke and a small cairn of stones hikers left at the crash site, along with bits and pieces of metal from the crashed bomber.

Lee said, “He saw the little cairn and said to himself, ‘We have to do something about this.’ He felt that such a tragic sacrifice deserved more recognition. He started working on getting Bob Cahillane, the veterans agent in Northampton, on board with the idea and Bob brought each of us.”

“I extend a huge thank-you to the families,” she said. “You shared the loss of your family members. This accident has become imbued with meaning that’s bigger than all of us.”

State Sen. John Velis, himself an Army Reserve officer, said the men who died in the 1946 plane crash left a legacy that is kept to this day.

“Those who volunteered, those who were on this mission and those who still valiantly serve their country, the willingness of men and women to raise their hand and take the oath to defend this nation, as long as we have those who will, we will be OK as a nation.”

U.S. Rep. Richard Neal, D-Springfield, pointed to the irony of the deaths memorialized on Mount Tom, men who died just after their work was done but their lives not completed.

“Think of the irony of these men returning after having participated in the greatest success story in the history of the world,” he said. “Then they die in a peaceful return mission. The story is not over, certainly for their families, as we cannot call out those spectacular achievements of lives never been lived out.”

Helen Swahn and her older brother Ralph McFadden, both from Erie, Pennsylvania, never knew their dad, Ernest Gillis. Ralph was 1 year old when his father died and Helen not yet born.

“My mother was pregnant with me when he died,” Swahn said Saturday. “I was born three months later on my dad’s birthday.”

Their mother remarried a few years after the crash, so the pair didn’t hear much about Gillis as they grew.

“I heard a few stories, but the family didn’t talk too much about him,” Swahn said. “We knew we had a dad who was killed in a plane crash in the war. Actually, we heard very few stories until my mother received a flag in the mail after the first ceremony.”

The first ceremony Swahn mentioned was in 1996, when a formal memorial was created at the site 50 years after the crash, organized and maintained by a group of people who had little direct knowledge of the men they venerate.

The memorial has the name of each of the victims etched on its front. In some ways that craving makes her father’s death real to her, Swahn said.

“Yeah, it makes me feel kind of odd. The only thing I ever knew about him was he made a record for my mom and sent it,” she said. “It was kind of scratchy, but I could put a voice to him. Seeing his name there on the memorial makes it real.”

Swahn and McFadden will travel to Beverly later this week to meet with cousins they haven’t seen in almost 65 years, Swahn said. There they will get to see Gillis Park, named for her father and his brother John, who was killed earlier in the war in a bomber crash.

Saturday’s master of ceremonies, Alfred Stettner, is the nephew and namesake of Alfred Warm, a 19-year-old Coast Guardsman from Brooklyn, New York, who was killed in the crash.

Stettner said his mother’s brother worked at a long-range radio navigation station on the southeast coast of Greenland.

“She was 15 when he died and it was a real tragedy for her. They were very close.”

Among the artifacts a searcher recovered the morning after the crash site was a pinkie ring that belonged to Warm. Stettner wears the ring on his own finger.

Susan Miller flew into Holyoke from Champaign, Illinois, for the ceremony Saturday. She said she didn’t know much about her uncle Arthur Miller.

“My grandparents always had Arthur’s picture, but they rarely talked about him,” Miller said. “When I grew up, he was an uncle who was, sadly, just a picture of my dad’s brother who died in a plane crash in the war. I think it was so painful for them to talk about it they didn’t. Then I became a military mom and sent my son off to war, and that’s when my uncle started to become a little bit more real to me, and I understood the pain that the loss meant.”

Miller said the carving of her uncle’s name on the memorial changed the sense of family.

“It’s one thing to see pictures of it, but as soon as we got here, I went straight to the memorial and bent down the touched it in tears.”