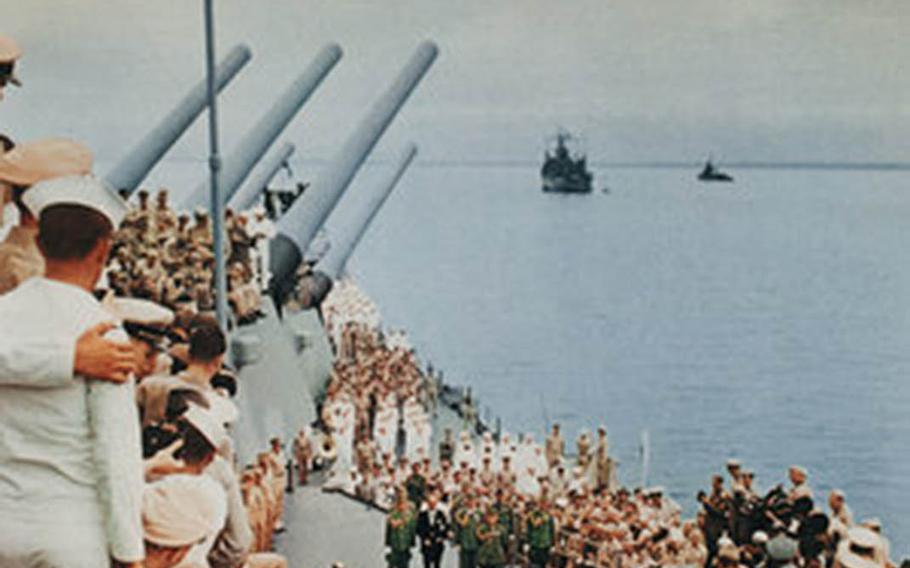 "I think (the program ) went incredibly well, " National History Day Director of Programs Lynne O'Hara said. "We had 15 student-teacher teams able to travel, and they spent six days immersing themselves in the history and the culture, and studying World War II in the Pacific, from the vantage point of Honolulu."

A total of 129 teams applied for the program. One from Hawaii was selected: Mililani High School student Armaan Needles and his teacher Charlie Buenafe.

"I loved doing the program, " Needles said. "It was sad to see everybody go. We made some friendships that will last for a good while."

The program included tours of Iolani Palace and Hickam Air Force Base, lectures and discussions and an overnight stay on the USS Missouri.

Buenafe, who grew up in Hawaii, said that in the past she took her proximity to these places for granted and didn't know the personal stories of those living during the time of World War II.

"I think one of the biggest things that history teachers know is that empathy is very hard to teach in the classroom, " Buenafe said. "(The experience ) was an eye-opener, and I can take it back to my classroom."

The program culminated with each team presenting a eulogy they wrote for a Silent Hero—a military serv -ice member who died in World War II who is buried or memorialized at the National Memorial Cemetery of the Pacific—in front of their graves at Punchbowl Cemetery.

"We think that it's very important when you're studying any war, or any major movement in history, to look at the story of individuals because if not, it becomes numbers, " O'Hara said. "The ability for the students and teachers to select someone from their hometown, or at least their states, and learn their story before the war, their military service, and for many of them, to make contact with family members, turns an event like the sinking of the Arizona or the Battle of Iwo Jima into an event where their particular soldier, sailor, airman or Marine was killed, and it becomes part of the story because you see it through the eyes of one person."

Each team conducted extensive research on its selected Silent Hero. The research and eulogies of each team are also posted on NHD's Silent Heroes website.

While the program was delayed for a year due to the COVID-19 pandemic, O'Hara said it was "incredibly crucial " that the program take place in Hawaii.

"The idea of place-based learning is so incredibly crucial and important because you think you know things, you think you understand things, but experiencing them is very, very different, " O'Hara said. "Being on-site and seeing the places and understanding the geography, you really need to be on-site for that to really make its impression."

For Needles his experience with the program changed his perspective of history.

"I see World War II very differently now, " Needles said. "Researching Pearl Harbor really in depth gave a completely new understanding, and that definitely helps, so I think that it's going to give me a new perspective of when I look at other wars and other soldiers in the future."