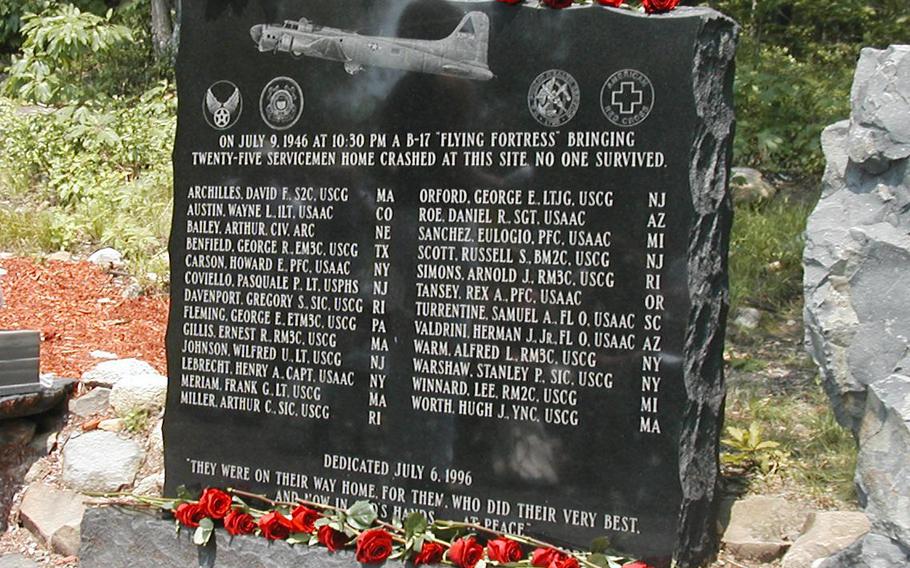 HOLYOKE, Mass. (Tribune News Service) — The grainy, black-and-white news reel footage shows the wreckage of a B-17 Flying Fortress in bits and pieces. Clothing and other personal belongings of those aboard can be seen strewn across the rocky, wooded mountainside.

A mighty workhorse of the U.S. Army Air Corps’ bomber force in World War II, the aircraft had been converted for use to ferry soldiers and sailors home from war duty. On the night of July 9, 1946, it had been flying south from Goose Bay in Labrador, Canada.

“All on board were instantly killed. The plane burst into flames when it crashed. Fire and intense heat delayed emergency workers,” reported Maurice Joyce in the Paramount News broadcast of July 10, 1946. “Presumably the pilot, flying through light rain in unfamiliar territory, failed to see the warning light on the mountain that rises 1,200 feet from the plain.”

The newsman, with dramatic music playing in the background, reported the crash “is one of this year’s major air disasters.”

It was 75 years ago this week that the bomber-turned-transport plane slammed into the side of Mount Tom in Holyoke. It happened around 10:30 p.m. as a light rain fell on Western Massachusetts and the aircraft was attempting to land at Westover Field in Chicopee to drop off some of the service men headed home.

Eighteen members of the Coast Guard, some of them still teenagers, were among those who died, along with a flight crew of four, a member of the U.S. Public Health Service, an American Red Cross worker and a member of the Army Air Corps.

Today, in a peaceful setting that belies what the crash scene was surely like, a granite memorial bearing the names of all 25 who perished that night preserves a chapter of history that might otherwise have been lost to time. Lost, save for the dedication of a band of volunteers, some of them veterans, some of them aviation enthusiasts and even a pair of ardent hikers who treasure the mountain’s nature preserve.

For years in the 1990s, Robert Cahillane of Northampton kept a piece of the wrecked aircraft’s fuselage on his desk while serving as his city’s veterans’ services agent. “I’d hold it in my hand from time to time and say, ‘Come on Cahillane, you’ve got to keep this going,’ ” he shared this week about the efforts more than 25 years ago to get the memorial erected. It was dedicated in 1996 on the 50th anniversary of the crash.

Now 84, Cahillane is well aware time is marching on and how his generation is the last to carry memories of American life amid a world war. It’s why he and others among the first volunteers involved in the memorial’s creation have turned to the next generation for help.

Jesus M. Pereira is half Cahillane’s age. His passion for the mountainside shrine to the lives lost three-quarters of a century ago appears no less, though.

“A lot of times history gets lost with time. Time can bury the past,” says Pereira, who grew up in Holyoke largely unaware of the crash having occurred. “A lot of great people came together to remember the 25 members of the armed forces and Red Cross that passed away on that mountain.”

A retired member of the Army National Guard, Pereira is the current director of veterans’ services for the city of Holyoke. He says he’s humbled to volunteer alongside so many who have devoted so much to the B-17 memorial. The crash was a “significant event” in Holyoke’s and the nation’s history, he says It marked the most significant loss of life outside a maritime disaster in the history of the U.S. Coast Guard.

“It’s easy for us to forget about history. We do it all the time,” says Pereira. “In this case, very few people knew about (this crash) …People did sacrifice their lives for the greater good, for the life we have today. Compared to living in the 1940s, we are very fortunate people, and we should take a moment to remember those who came before us.”

Pereira says he’s been humbled to be entrusted by Cahillane and others to take over leadership of the group. Cahillane initiated requests earlier this year to U.S. Rep. Richard E. Neal, D- Springfield, and state legislative leaders for help in having the memorial designated a national and state historic site. The hope is such action can ensure its perpetual care for generations to come.

Neal knows well the labors of love put into creating the memorial. “I think we should all be very grateful to Bob (Cahillane) and his committee for keeping these memories alive,” says the congressman, who plans to be at Saturday’s 75th commemoration ceremony. “He’s been gallant in the way he’s addressed creating the memorial and preserving the history.”

Neal says he will support efforts for a historic site designation. Once a history teacher, Neal says he believes it important to view the memorial against the backdrop of the times in which the crash occurred.

“It was one of the last times that Americans agreed on everything. There weren’t many dissenting voices as there have been in wars and conflicts since. World War II was clearly a moment of universal support of the war effort,” Neal says. “There are a series of great stories to tell about those who did their part and died in service to our country.

“When you look further at the series of events beyond the facts of those who served directly in World War II and what places like the Springfield Armory meant to World War II…where women stepped to the fore, doing work that had been largely done by men, these stories are all worth retelling.”

State Rep. Patricia Duffy, D- Holyoke, is among the state legislators supporting the efforts to provide for future care of the memorial. “I really support the memorial,” she says. “The committee, Bob Cahillane and all of them, are doing the yeoman’s work, and we are working, along with the congressman’s office, to find out what federal and state funding might be available.”

Today, there are just over 20 members of the memorial’s committee. They come from across Western Massachusetts, according to Pereira. “They have a tie to either aviation, the military or the mountain,”” he explains. “There is so much history in this group that I am ashamed to be the chair.”

To see the level of volunteerism, Pereira adds, “is exciting. It restores my faith in America that there are those who care so much.”

The memorial stands largely on land which is owned by the Holyoke Gas & Electric Light Department and the immediate area around it straddles state-owned Mount Tom Reservation land, according to Pereira.

“As we dig deeper into creating historical site, preservation would only apply to the land and not so much the monument itself,” Pereira says. That means future work will need to involve a nonprofit organization which could serve as a vehicle to apply for grants to cover the costs of maintenance and upkeep to protect the memorial, he says.

On Saturday at 10 a.m., just as has been done each year since the memorial was dedicated in 1996, a ceremony will be held to mark this 75th anniversary of that long ago night. Amid a sentry of 25 birch trees, one for each of the men lost, and a circle of Goshen stone said to simulate the path of plane taking off, there will be a service of remembrance. To learn more, go online to Facebook.com/mttommemorial.