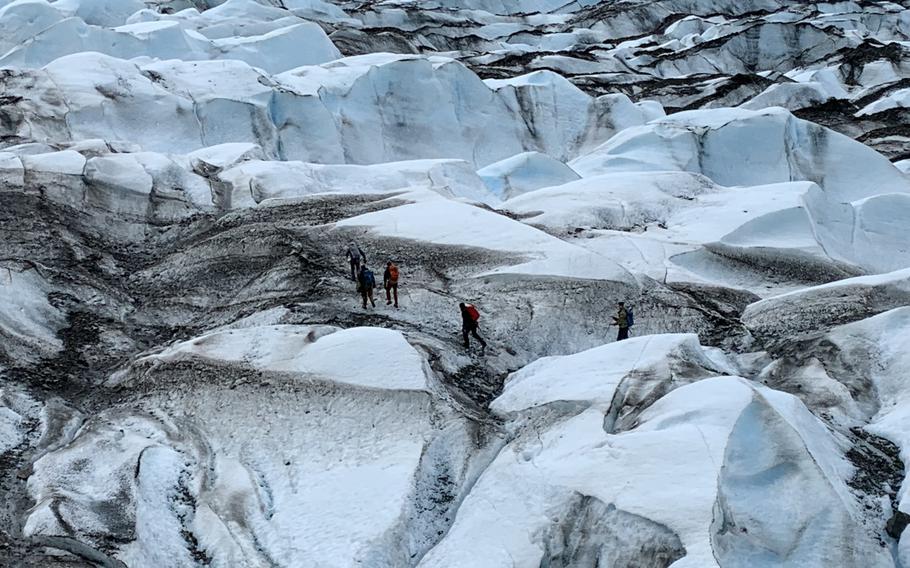 Recovery team members traverse Colony Glacier, Alaska, June 2019. The recovery team was searching for remains from a C-124 Globemaster II that crashed into Gannett Mountain, Alaska, on Nov. 22, 1952, while flying from McChord Air Force Base, Washington, to Elmendorf Air Force Base, Alaska, resulting in the loss of 52 service members. (Nicole Leidholm/U.S. Air Force)

For Wheaton, 85, the memory of her big brother’s face, too, has been frozen in time—mythic, captured in a few colorized military portraits that now are almost 70 years old.

The only brother Wheaton will ever know is forever a 21-year-old man who left the family farm in Evansville with a gleaming smile and an airman’s stripes stitched to the shoulder of his Air Force uniform.

Edward Miller was lost to the world on Nov. 22, 1952, when a Douglas C-124 Globemaster troop transport plane he was on with 51 other military men between Tacoma, Washington, and Elmendorf Air Force Base near Anchorage, Alaska, lost its navigation coming in over mountains in a blinding, Alaskan blizzard.

As far as U.S. Air Force investigators could surmise, the big-bellied Globemaster plane crashed into the side of the jagged, 9,600-foot Mount Gannett, a barren, glaciated peak in the frozen Chugach Mountains about 45 miles east of Anchorage.

Miller, along with all the other men on the plane, died. Their bodies along with their belongings and fragments of the crashed plane were covered within a few days under dozens of feet of blizzard snow and ice.

For decades, the plane’s wreckage and the men killed remained buried deep in the crevasses of Colony Glacier, a 20-mile-long, alpine ice flow that in most cold seasons is virtually unreachable on foot.

“Evansville Man on Lost Plane.” That was the then 21-year-old Edward J. Miller’s epitaph, headlined in the Nov. 25, 1952 edition of the Janesville Gazette.

Now, almost 70 years after the Korean War-era plane crash in Alaska, Edward Miller is coming home. The 1948 Evansville High School graduate — who as a teen worked on his family’s farm — will be laid to rest July 17 with honors in a military casket at Evansville’s Maple Hill Cemetery, 3,400 miles from the mountain glacier where he was buried for decades.

Miller’s remains were among those of dozens of men who died in the 1952 Globemaster crash and were finally recovered. For the last eight years, a dogged crew of military searchers worked to locate and unearth the 52 lost on Colony Glacier, a flow of ice that has been melting precipitously since the early 2000s.

In 2012, an Alaska Army National Guard crew on a training mission in a Black Hawk helicopter spotted a yellow life raft from the ill-fated Globemaster. The raft stood out like a beacon, poking through the rugged white and grayish-blue surface of the glacier.

The raft was in wreckage that ultimately had spread out more than a dozen miles away from where the plane is thought to have crashed in 1952, Air Force officials said.

As of this summer, U.S. Air Force Mortuary Affairs Operations specialist Ed Conway said searchers have recovered remains of all but six or seven of the 52 members of the Air Force, Army, Marines and Navy killed in the Globemaster crash. A screenshot from a documentary looking at the recovery and history of the C-124A Globemaster found on Colony Glacier, Alaska. (Sarah Trachte/U.S. Air Force) 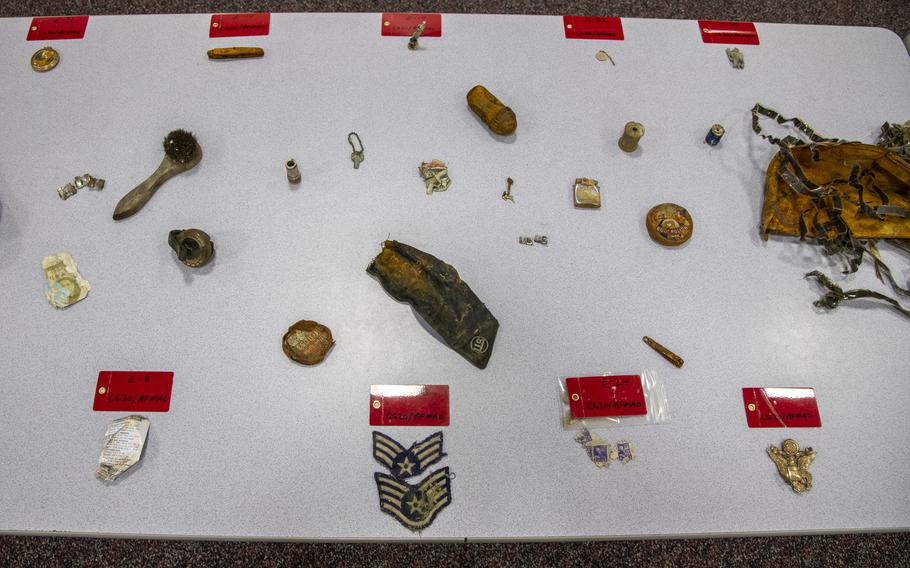 Recovery a race against time

Researchers and searchers have unearthed and identified scores of pieces of wreckage and human remains from the debris field—essentially a moving graveyard on a melting ice flow.

Year by year, the wreckage and the men lost migrated farther downhill, ever closer to Lake George, a deep glacial pool at the base of Colony Glacier.

Conway told The Gazette that Miller’s remains were unearthed during three different summertime search-and-recovery missions between 2012 and 2019.

He said the Colony Glacier Recovery Team, a group of Air Force and Army searchers, spent weeks over the past eight summers combing through rocky, icy areas of a melting glacial crevasse where the crashed Globemaster migrated.

The melting of Colony Glacier is what is thought to have caused fragments of the Globemaster to surface in recent years. Yet the melt itself, hastened by the forces of climate change, has made the search to find Miller and others aboard the Globemaster a race against time.

The Air Force’s recovery effort, Conway said, will continue until either the remains of the lost men are found or searchers see evidence that most or all of the Globemaster’s debris field has flowed into the frigid depths of Lake George.

Amazingly, Conway said, some of the men killed on the Globemaster have surfaced from the glacier ice in a state well enough preserved that researchers could identify them using their fingerprints.

During one of three searches of the airplane wreckage, a small amount of human remains was found near a single military ID tag.

Conway said the Armed Forces Medical Examiner laboratory in Dover, Delaware, which works in concert with Mortuary Affairs at the Dover Air Force Base, used mitochondrial DNA sequencing of deep bone tissue to confirm in 2019 that the remains found near the dog tag were those of Edward Miller.

In 2018, Wheaton, Miller’s sister who now lives in Fort White, Florida, got a call from an Atlanta genealogical group that cooperates with the military on recovery of long-lost soldiers. The genealogists told her of the presumed identification of her brother’s remains.

In 2019, Conway, a funeral director who works on a nine-person Air Force mortuary team, personally delivered the Air Force’s confirmation of the discovery to Wheaton’s home. Wheaton made him dinner.

“She asked me what I like to eat,” Conway recalled. She then made him meatloaf and mashed potatoes for dinner.

Miller was survived by is three sisters. Wheaton was 15, a junior in high school, when her family got word that Miller never made it on the Globemaster flight from McChord Air Base in Tacoma, Washington, to Anchorage.

In late fall of 1952, Miller was handed a new assignment by the Air Force, which he had joined just a year earlier.

Along with him on the Globemaster were two other Air Force airmen from Wisconsin who also died in the crash: Thomas Condon of Waukesha and Dan McCann of Marinette, according to a Nov. 25, 1952, story in the Wisconsin State Journal.

“They were just moving troops from one place to the other at the time,” Wheaton said in a recent interview. “Edward told our mother, ‘I’m going to Anchorage now. And after that, if you don’t hear from me for six months, don’t worry.’”

“I think he was going to be sent out to the Alaskan Aleutian Islands, probably to monitor Russia. It was the Korean War, but it also was during the Cold War.”

Wheaton said she felt a flood of grief wash over her when an Air Force official confirmed the recovery of her brother’s remains from the distant mountainside that swallowed his life almost 70 years ago.

No man left behind

“My first question to the Air Force was, ‘Why now? Why, after more than 60 years, do we have this happen now?’” Wheaton said. “They told me, ‘We never leave a man behind.’”

Military recovery programs have recovered hundreds of soldiers and military noncombatants lost in places as far flung as arctic Alaska, the Irish Sea and the jungles of Vietnam and Laos.

Conway said one of the military search groups is teaming up with the University of Tennessee to recover American soldiers who are thought to have fallen in battle in 1846 during part of the Mexican-American War.

Today, more than 80,000 U.S. troops are presumed missing. Conway said the U.S. is the only country in the world whose military actively works to recover soldiers lost in combat and non-combat.

“It’s a comfort to service members to know, ‘If I go out there and don’t come back, they’re not going to forget me. They’re going to keep looking.’ It’s a huge encouragement,” Conway said.

Several months after Wheaton and her family huddled around the radio on Thanksgiving Day in 1952 waiting for any news broadcasts about the plane crash that presumably had killed her brother, Wheaton remembers her family held a small memorial service at the Evansville Congregational Church.

It was in the summer of 1953. Flowers were in bloom, and one of Wheaton’s high school friends played a song on the church’s piano. But Edward—the brother who had delighted in taking his sisters’ money in living room Monopoly games and the brother who had fooled his sisters with football pump fakes in the backyard—wasn’t at his own ceremony.

“We did what we could without any remains,” Wheaton said. “It never hit me as a child, but I guess I’m just older now. When you’re a junior in high school, like I was when my brother died, you just think you’ll live forever. I’ve lost my husband in the last few years, and learning this (about) Edward now, it makes you realize just how precious life is.”

Now, at her home, Wheaton has a few keepsakes from the U.S. Air Force: her brother’s dog tag recovered from the ice, a letter from the Air Force promising to do the work to identify her brother’s remains and a few fragments of the Globemaster plane.

But there’s more closure to come for Wheaton, her sister Nancy and anyone in Evansville who held out hope that a young airman from town would one day return home.

Miller’s remains will arrive July 17 at Maple Hill Cemetery in Evansville for a public graveside service with full military honors.

The local service will be a day or two after the U.S. Air Force flies Miller’s remains into Milwaukee and an arrival ceremony takes place.

Bill Hurtley, an Evansville funeral home director and the city’s mayor, said he is coordinating services with Conway and the Air Force. Hurtley said it will be the first service of its kind he has managed—and one of the most unique homecomings he has known.

Conway will be there too. He said the recovery of Miller and his fellow service members aboard the Globemaster is special, in large part because of the unlikely forces that unearthed the crash, but also because of what caused the crash so long ago.

Many in the area who knew Miller are now gone. But no matter. Miller’s coming home.

“It’s sad, yes,” Wheaton said. “But when we have these ceremonies, you always find there’s a little bit of patriotism left. Which is kind of nice.”