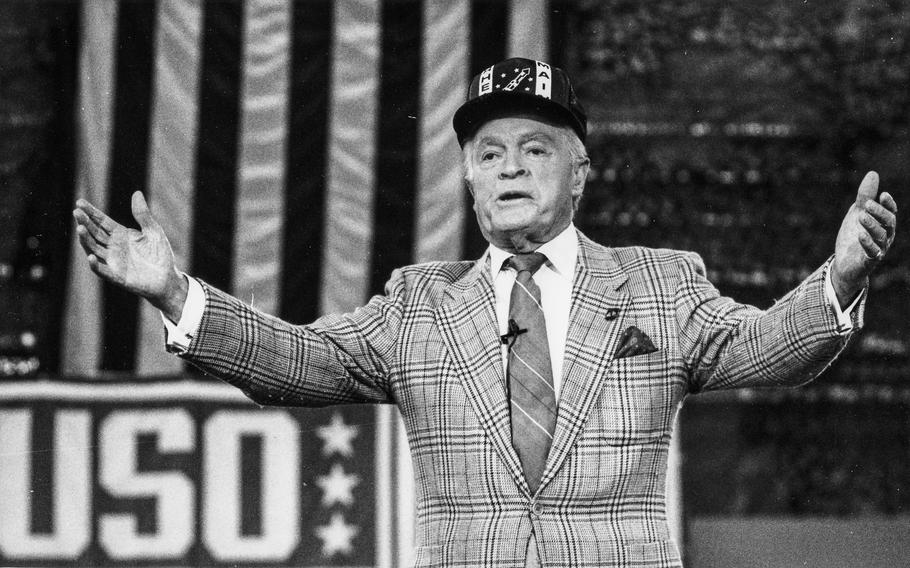 Buy Photo
May, 1990: Bob Hope sports a Rhein-Main AB jacket while saying goodbye on what was billed as his farewell tour of American overseas bases. (Ken George/Stars and Stripes)

"I make movies," he tells her.

"No," replies Hope. "My pictures have dialogue."

Hope has been delivering lines like that since well, it seems like forever. If he wasn't entertaining Napoleon's troops at Waterloo, it was only because he had been booked first by Wellington.

Hope is such an institution he seems more like a character from American literature or folklore — in a class with Huckleberry Finn or Paul Bunyan.

But there he was Thursday night — in the flesh — at Rhein-Main AB, West Germany, doing for 4,000 service members and their families what he's been doing for most of his 86 years.

This may be the last time, however. The tour, which included previous stops in England, Berlin and Moscow, was billed as Hope's farewell tour.

Hope asks Miss Universe what she wants to do when her beauty queen reign ends.

"Small world, isn't it? I want to be your patient." 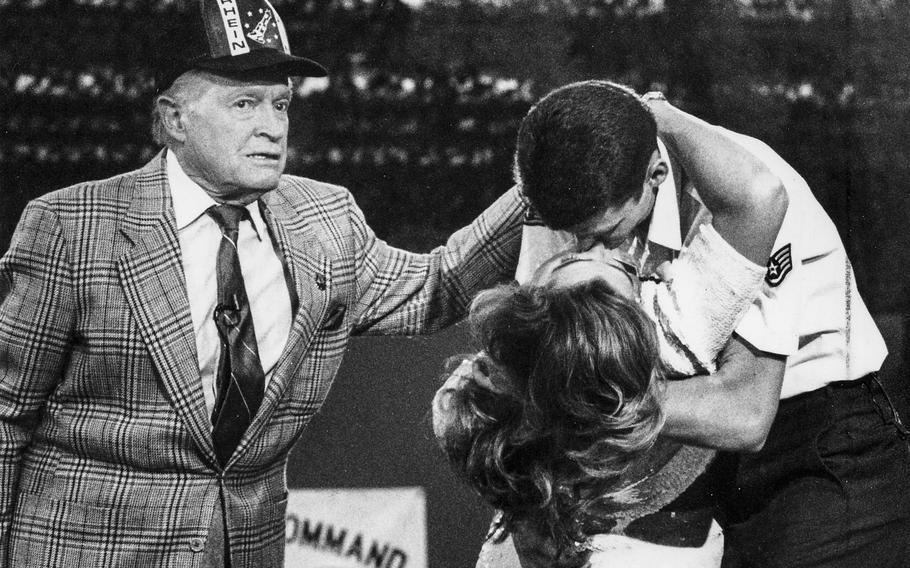 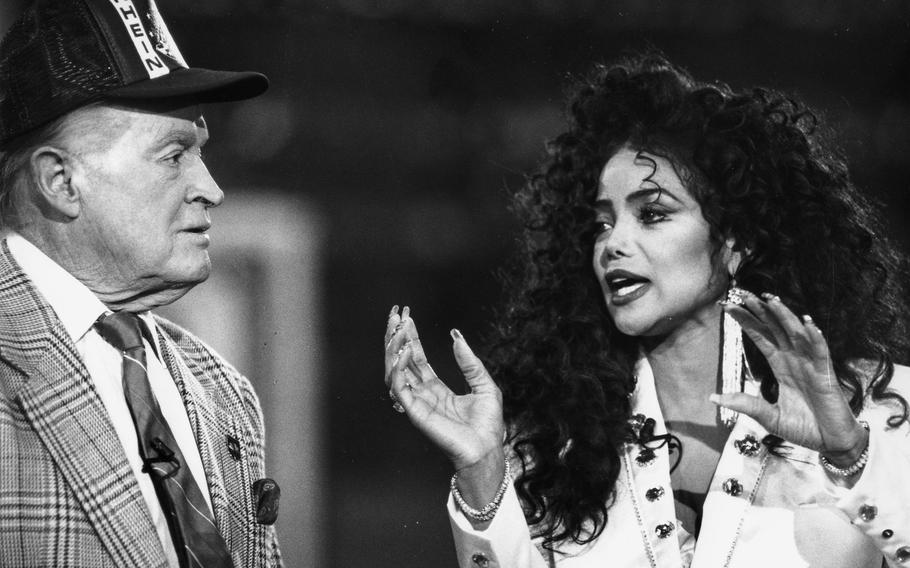 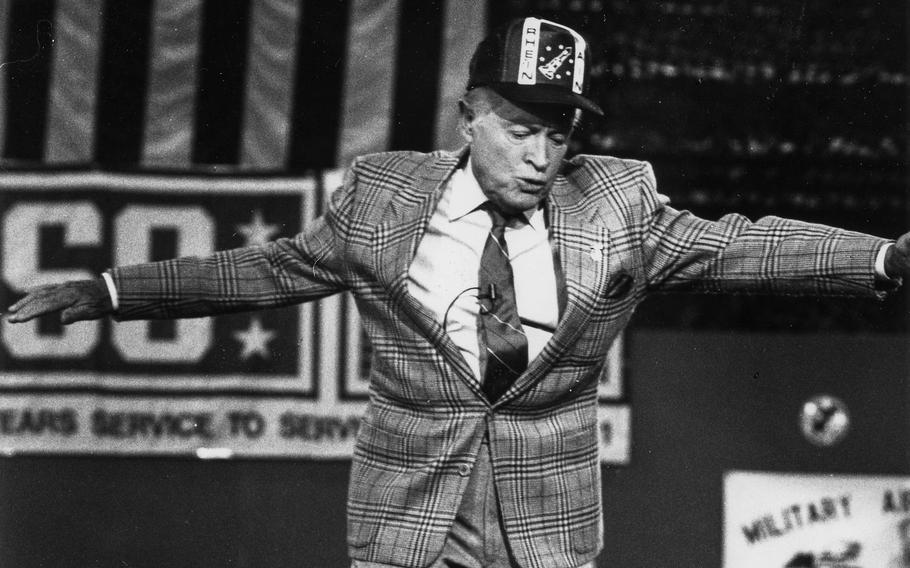 Hope's stature as the reigning king of entertainment allows him certain liberties. Consider this joke: "Frankfurt. What a city this is. The airplanes are stacked up overhead and the frauleins are stacked up down here."

Coming from the lips of an unknown comic, the line would raise indignant howls from women in the audience — or it should, at least.

But when the teller is Hope, the joke elicits howls of feminine laughter. And it should. It was a funny line expertly delivered.

So was this joke about overweight stewardesses:

"They still move their tails for you, only now the tails are so big somebody could get hurt. One flight attendant was so fat, when she turned around they showed the movie on her."

In somebody else's hands, that line could sting. Hope has no malice. It's just a joke.

Sometimes his jokes border on racism: "You remember the States. We have 50 of them now — 51 if you count Mexico."

And his lines on Germany would earn an enlisted man a stern lecture about host-nation sensitivity: "You can get two meals in Frankfurt. One is sausage and the other one is, too ... The national anthem (of Germany) is a burp in the key of E flat. , . Germans swallow more suds (beer) than a Maytag washing machine."

Do you really think anybody reprimanded Hope?

Hope may have been the headliner, but some in the crowd were there for the women.

"To tell you the truth, I'm a Miss Universe fan," said Sgt. Rick Johns of the 1945th Comm Group. "I got to see Brooke Shields working out at the gym. She was sweating like a pig."

The four shows will be pieced together into yet another Bob Hope television special to air in the United States May 19. AFN will air Bob Hope's USO Road to the Berlin Wall and Moscow sometime between 6 and 11 p.m. May 20.

And make no mistake about it. Hope's show is a television production. The hangar at the air base was perhaps for one night the world's largest TV studio.

If Hope flubbed a line, it was done again. Shields delivered a line about Zsa Zsa Gabor's recent trouble with the police, but the videotape glitched. It was done again and the cooperative audience responded as if the world's funniest joke had just been told.

"You got the wrong card up there," Hope told the cue card man halfway through an introduction of Shields. A few seconds later, he continued and introduced LaToya Jackson.

"Birds do it; bees do it," Clooney sings.

Also as usual, Hope uses service members as part of the act. Airman 1st Class Steve Kohler of the 435th Security Police found himself on stage with Shields in a skit that ended with him giving her a long kiss.

"I guess it's something to write home about," he said after the show.

Also getting in on the act was Airman 1st Class Mike Ball of the 435th Mission Support Sq. He was pulled up on stage by Jackson for a sexy dance.

"She came down and started walking toward me and reached out her hand," he said. "I felt obligated to go."

The show evidently closed Hope's overseas tours of military bases, something he has done since World War II, He is identified as much with these shows as he is for his "Road" pictures with the late Bing Crosby.

At the show's end, Hope and his cast came on stage to thank the service members for the job they do and for supporting his entertainment efforts.

"You know why we do it? Because everybody on this stage loves you," he said.

It was just his way of saying, "Thanks for the memories."

The cue cards accompanying the superstar entertainer on his farewell tour for American troops overseas weighed 2,000 pounds, and, as usual, covered a variety of topics.

Here are just a few pounds of laughs:

• On the food at the air base: "An airman told me, 'If the 12 Disciples had eaten the Last Supper here, it would have been.' "

• On the Rhein-Main Rockets football team: "They're crazy about football here. It's the first time I've ever seen a windsock hanging from a goal post ... Joe Montana writes to them for tips ... President Bush came here last year and was pressed into service as a waterboy . . . I used to play football. I was a center, but I had to quit. I'm ticklish."

• On construction at the base: "It'll be a nice base when they finish it. I was getting ready for bed last night and a bulldozer tore my room down."

• On Germany: "Lederhosen is a German word meaning That's not a chicken; those are my legs.' "

• "Germany is the home of the world famous Oktoberfest. I'd love to celebrate it, but I keep forgetting what month it's in. Oktoberfest — that's hangover spelled backwards."

• “That Trabant is something. That’s the first car I’ve ever seen that comes with a skate key.”