After 100 years, soldiers are no longer segregated on Durham’s WWI memorial

DURHAM, N.C. (Tribune News Service) — For 100 years, the World War I memorial in Durham served as a constant reminder of a different and more unequal era in American history. The stone pillar was both a monument to those who lost their lives, and to a time when not even their ultimate sacrifice could make men equal in the eyes of the country they died serving.

When the memorial went up in 1921, the first piece in what became a statue garden in front of the old county courthouse, it listed Durham County men who'd died in the war. The names of the white soldiers were etched into the front of the monument, facing Main Street and easily visible to those who walked past. On the back, out of sight, were the names of the Black soldiers.

In time, the monument began to symbolize a quiet fight for equality. Now, after a year of national reckoning concerning race, and in a time in which Confederate monuments throughout the South have been removed or torn down, Durham's World War I memorial tells a more complete story. In March, the city unveiled a plaque in front of the memorial, complete with historical context and a full list of the men who died in that war.

The names are organized not by race, but in alphabetical order. More than a hundred years after those men could have died together in a trench, they are listed together in a prominent place in their home county, which they once departed never to return.

"It reflected a time period that wasn't our best and brightest," Linzie Atkins said of the memorial's original form, when the names were segregated. Atkins is an officer with the Durham County Department of Veterans Services, and he assisted in the effort to update the monument. Through various records, he helped identify some soldiers whose names were not included on the memorial.

"I welcomed the project," he said, "in terms of trying to come up with some way of addressing that particular era here in Durham, and then trying to do as best we can to kind of put things in order. Because on the battlefield, the bullet doesn't care what color you are."

The updated memorial has been a long time coming, and is the culmination of an effort that dates to at least 2003. That's when the Durham City/County Appearance Commission adopted a resolution to address the segregated names on the memorial. In 2013, Eddie Davis, a former Durham city councilman, submitted that resolution to the board of county commissioners.

It took another eight years for the project to come to fruition.

"Displaying this memorial plaque will serve as a sober reminder that the time to do what is right is always 'now,'" Lois Harvin-Ravin, the county director of veterans services, said in a recent statement. "It's about more than rearranged and added names. This plaque speaks from the heart of Durham and shouts that every life is important, regardless of race."

The original memorial included 48 names on the front, all of them of white soldiers. The first name belonged to Junie Andrews, followed by Carl Blake and Albert Brafford. The updated plaque includes 12 soldiers whose names had long been hidden, or left off completely. Among them: Junious Ashworth and Willie Bird and Claude Rawlings.

For 100 years, some of those names had been lost to history or been given second-class status because of the race of the men they belonged to. Atkins, who served in the Marines from 1985 through 1993 and spent time in Desert Storm, joined the veterans services in Durham in 2015. He soon became aware of the segregated names on the World War I memorial, but he "didn't know what could be done or what should be done," he said.

Eventually, Peri Manns, a city employee who led the effort to update the memorial, requested Atkins' help. In addition to the known Black soldiers who had not been recognized alongside their white counterparts, Atkins identified other soldiers who were not originally included on the memorial whose race could not be determined.

When Atkins joined the Marines as a 19-year-old, he said, he didn't necessarily understand his purpose. In time he came to understand "why we have a military force," he said, "and what we're fighting for. And that's freedom. And what comes with that freedom is freedom of speech, and the freedom to be heard."

In a lot of ways, the past year — the protests following the police murder of George Floyd; the tearing down and removal of Confederate monuments, including ones in Raleigh and other parts of North Carolina — has been defined by those seeking a voice and seeking to be heard. In some places monuments have come down, what they stood for condemned.

Durham's own Confederate statue came down in 2017, pulled off its pedestal by the rope of protesters who refused to let it stand. For a long time it had stood outside the old county courthouse, steps away from the World War I monument that, until March, failed to recognize white soldiers and Black soldiers in the same way. After 100 years, a wrong has been made right. 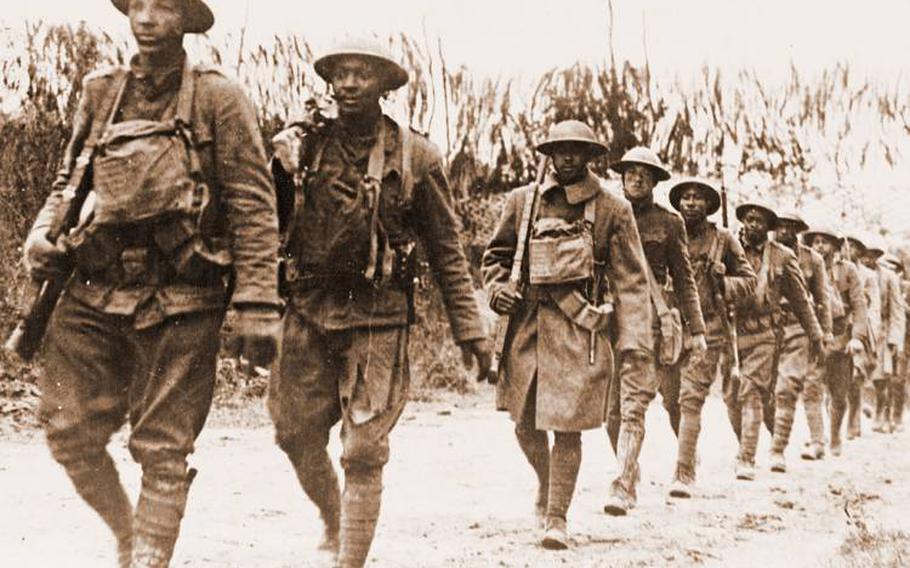