‘It’s pretty unfriendly down there’ 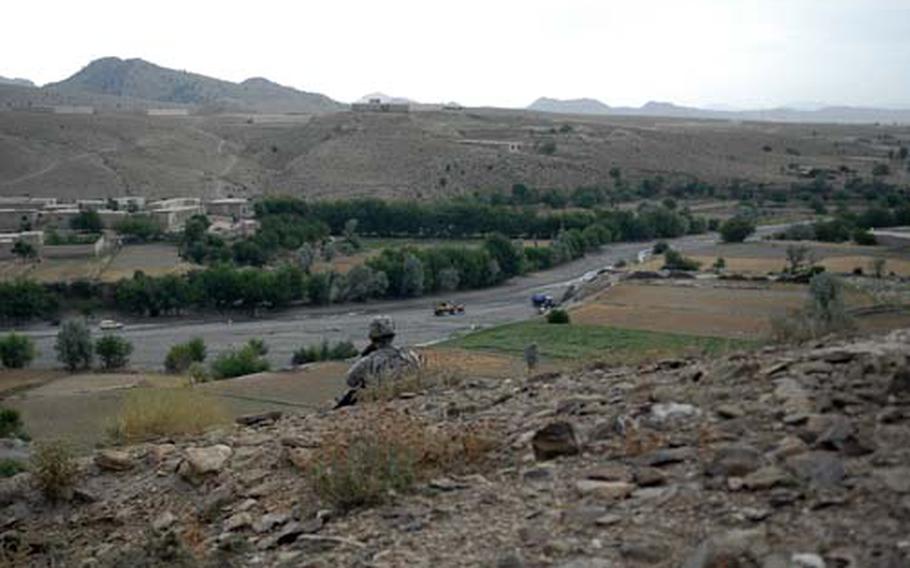 An American soldier stands guard on a hilltop overlooking a wadi in the village of Shembowat, Afghanistan. The village is often the point of origin for mortar and rocket attacks from insurgent fighters who threaten anyone who cooperates with the government or U.S. and coalition forces. (Dianna Cahn/Stars and Stripes)

CAMP CLARK, Afghanistan — The shell flew over Camp Clark in the early afternoon last week, sending residents of this U.S. base in eastern Afghanistan’s Khost province into a familiar scurry for cover.

The single mortar shell fired from Shembowat, the village on the next hill, missed the camp just minutes before village elders were due to arrive at the adjacent Afghan army base to talk about insurgents and how they have threatened residents not to cooperate with the government.

Give us weapons and we will fight them, they told American and Afghan commanders.

Right in Camp Clark’s backyard, Shembowat is a reality check for the hardened military camp, where good food, air-conditioned huts, Internet and even a swimming pool offer a comfortable respite from the war outside the gates.

Shembowat is a typical farming village, far removed from the political landscape. Residents often sit on the fence between the warring forces in their midst. Under threat of violence, villagers and some leaders lie low, giving free rein to insurgents who wander the mountain terrain they call home.

For many, it seems a safer course of action. Local Afghan politicians are often assassinated by insurgents. And there is harsh retaliation against villagers perceived as supporting the government or U.S. troops. A villager told Israr during his visit to Shembowat that, two days earlier, a resident was taken from his home and beheaded on such a suspicion. 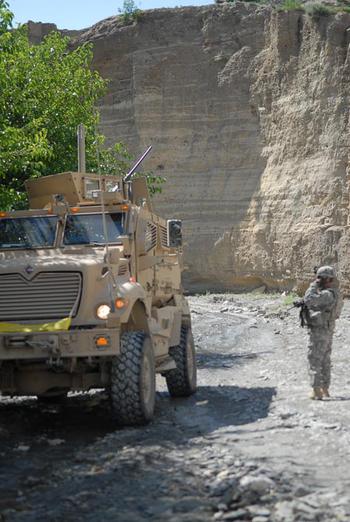 A coalition soldier with 3rd Platoon, Company D of the 4th Brigade, 25th Infantry Regiment out of Alaska stands in a canyon in the Nader Shah Kot district in eastern Afghanistan. The platoon pushed northward up the wadi past Shembowat into what is perceived as hostile territory in order to make contact and speak to villagers about polling locations ahead of the August presidential elections. (Dianna Cahn/Stars and Stripes)

An hour after meeting with the elders, Lt. Col. Pete Molin, commander of the Embedded Training Teams at Camp Clark, and Brig. Gen. Mohammad Israr, the Afghan National Army’s 203rd Corps’ 1st Brigade commander at neighboring Camp Parsa, fired up an armored convoy and headed down the road to Shembowat.

They marched up past the bombed-out school that the U.S. helped build, and stood on the high ground overlooking the stunning landscape of the village and its farmland pouring into the valley below.

To the south, Clark and Parsa were readily visible, while the view into the wadi, or dry riverbed, and the mountains beyond spoke of the challenges U.S. and Afghan forces are facing here.

In February and March, shells were flying at Clark on a regular basis. One hit the dining facility and Molin said he and his staff were working hard to keep folks calm.

"That would have been fireworks," said Suarez, whose 3rd Platoon, Battery B is attached to Task Force Steel in Khost. 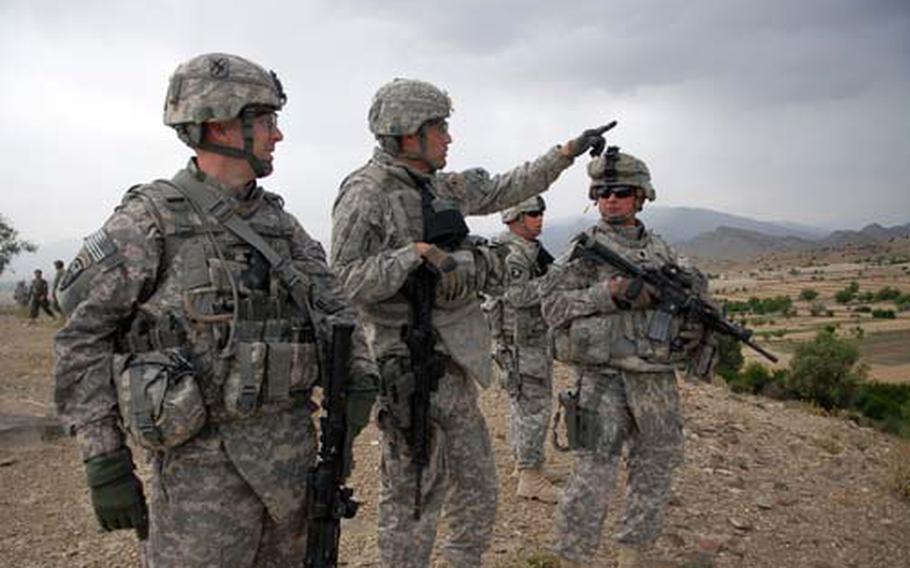 Lt. Col. Pete Molin, center, who commands training teams at Camp Clark in eastern Afghanistan, points to what he called hostile area north of the village of Shembowat on June 14, after a rocket was fired from the area toward Camp Clark, just a few miles away. With him are (left) Lt. Col. Matthew Smith, of the 1st Battalion, 121st Infantry Regiment, of the Georgia National Guard’s 48th Brigade Combat Team, and (right) Molin’s upcoming replacement, Lt. Col. Gary Thurman, also of the Georgia National Guard’s 48th BCT. (Dianna Cahn/Stars and Stripes)

Even the elders who work with the U.S. and Afghan forces sometimes deliver cryptic messages. During their visit to Israr’s office, village elder Haji Nazeb told the commanders, "If we weren’t with you, you’d have all the rockets coming at you," leaving some to question whether that was intended as a threat, or just a statement of reality.

The wadi behind the madrassa leads north past Shembowat and into a series of remote mountainside villages in the Nadir Shah Kot district in western Khost province. The area is not easily accessible, and U.S. forces in their cumbersome mine-resistant armored vehicles hadn’t penetrated that hostile area for some time.

Recently, 1st Lt. Nick D’La Rotta, from the 4th Brigade Combat Team Airborne, 25th Infantry Division out of Alaska, led a joint mission to push up the wadi and get with locals about polling places for the August presidential elections.

Flanked at times by 20- to 30-foot cliffs, the soldiers remarked how easily men with guns could fire down on them from the ridgelines. One soldier dubbed the route "Ambush Valley."

When they reached the village of Chirmir, perched along the mountainside several miles past Shembowat, the convoy stopped. Beside them was a single house at the bottom of the steep slope.

Afghan soldiers made contact with the homeowner, then D’La Rotta sat down with his translator and the man for a chat in the shade.

The conversation was amicable. But when asked about security, the villager gave a familiar answer: There are no problems, security is good. It was a scenario repeated several times that day, as the forces climbed up to Chirmir and then later up to the village of Kanay, where they located a mosque that is slated as a polling site in August.

"We get a lot of those same responses from people," D’La Rotta said later. "It’s a different attitude of ‘Inshallah’ (God willing) — anything can happen. It can be easy to talk to the people. They will give you some information, but as soon as we leave, it’s back to normal for them. The enemy can be back in there without us even knowing it. We were out there for four days and the day after we left a guy was beheaded and rockets were fired at Clark." 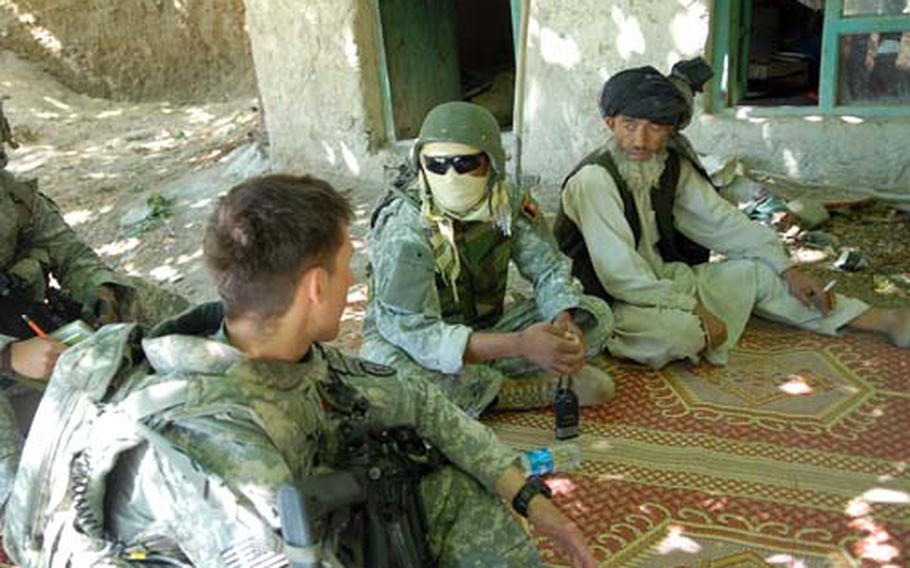 First Lt. Nick D’La Rotta, leader of 3rd Platoon, Company D of the 4th Brigade, 25th Infantry Regiment out of Alaska, talks with a resident of the mountainside village of Chirmir in eastern Khost province on June 16. (Dianna Cahn/Stars and Stripes)

To keep up a presence, the troops are working with the Afghans to set up checkpoints at key locations ahead of the elections.

Given the difficulties, it is easy for troops to feel that they’ve made few inroads in this battle to forge relationships with the Afghan people.

But D’La Rotta takes encouragement from their work with the Afghan forces. There are still problems — the Afghans rescheduled the mission three times before it actually got on the road, and then, only after D’La Rotta woke up his counterpart — but D’La Rotta and other mentors say Afghan National Army forces are learning.

Clark is described by Molin, its top officer, as "the best FOB (forward operating base) in Afghanistan." Many of the troops agree.

Until recently, Clark was an intimate camp, with fewer than 200 people.

Most knew each other by name and soldiers gathered nightly in the gym to play volleyball or at the smoke shack, a screened-in wooden shack that looks more like a safari lodge than a base on the front lines. When more than 100 new forces arrived here last week, some expressed concern that Clark would lose its close-knit feel.

"I loved it when it was 150 people," said Suarez, who puffed on a cigar in the smoke shack on a recent day off. "Now our numbers grew, so some of our luxuries are diminishing a bit, like good food and open spaces."

But the luxuries can’t belie their location.

A day after D’La Rotta’s mission, the 2nd Platoon, Company D hit a roadside bomb about 800 yards outside the camp’s gate. It knocked the gunner unconscious and rattled everyone in the truck, though no one was badly hurt, said Sgt. 1st Class Joseph Delage, who was in the vehicle’s front seat. 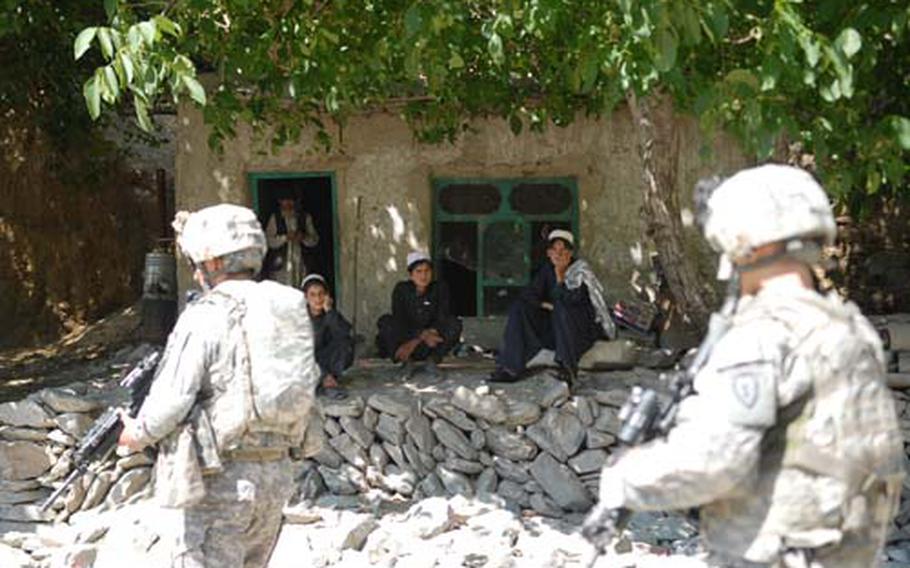 Coalition forces with 3rd Platoon, Company D of the 4th Brigade, 25th Infantry Regiment out of Alaska approach a house on the mountainside village of Chirmir during a mission on June 16. The platoon pushed northward up the wadi past Shembowat into what is perceived as hostile territory in order to make contact and speak to villagers about polling locations ahead of the August presidential elections. (Dianna Cahn/Stars and Stripes)

"It’s a win for them to be able to set something up so close. Nobody saw it, nobody could do anything about it," said Delage, 32, of Applegate, Mich. "But then again, we are not too far from Shembowat. Once we get that cleared up, it should be quieter around here."

And on Saturday, a convoy about six miles from base was ambushed. First Sgt. John Blair, from the 48th Brigade Combat Team of the Georgia National Guard, was killed when his vehicle was struck by a rocket-propelled grenade.

"I tell my men they have to be thinking warriors," Capt. Bobby Davis of Columbus, Ga., whose platoon went out to help the convoy, said the following day. "You have to be able to go out and talk to people and in the flick of a switch, like yesterday, to kill and then continue the mission — go out again and talk to people."