In calmer Fallujah, Marines remain on guard but focused on new set of tasks A plan to pass out school supplies was foiled this week when the school wasn’t open, but members of 3rd Battalion, 3rd Marines received a list of needed items upon their visit. (Allison Batdorff/Stars and Stripes)

FALLUJAH, Iraq — “Don’t worry,” 1st Lt. Todd Richardson tells his Marines. “There’s still a chance someone is going to take a shot at you.”

Richardson’s strange reassurance has a dual purpose for members of the 3rd Battalion, 3rd Marines who deployed to Anbar province two months ago.

One, it keeps everyone on their toes. They are still going outside the wire every day, even though many are now playing unexpected civil-affairs roles due to Anbar’s drop in violence and willingness to self-police.

And two, it makes those complaining about the quiet seem kind of silly.

“Before, it was ‘We shoot insurgents and they shoot back.’ It was a never-ending thing,” Richardson said.

The 30-year-old from Baton Rouge, La., has “been there, done that” in Anbar twice before — in Ramadi and Haditha — and would rather talk water treatment with local sheiks than get shot at, mortared or hit by a roadside bomb any day, he said.

“Sure, the stories when you get back home might not be as good,” Richardson said. “But I tell them that it’s better this way. This is how I think we’re going to win the war.”

At Camp Blue Diamond near Ramadi, 1st Lt. Mick Duffy shepherds local contracting projects, such as water plants, solar streetlights and garbage pickup, through the Jazeera area’s fledging public process. He estimates he spends $250,000 to $500,000 of U.S. grant money on projects every month. He then makes frequent status checks on the projects while talking to locals about new ones. 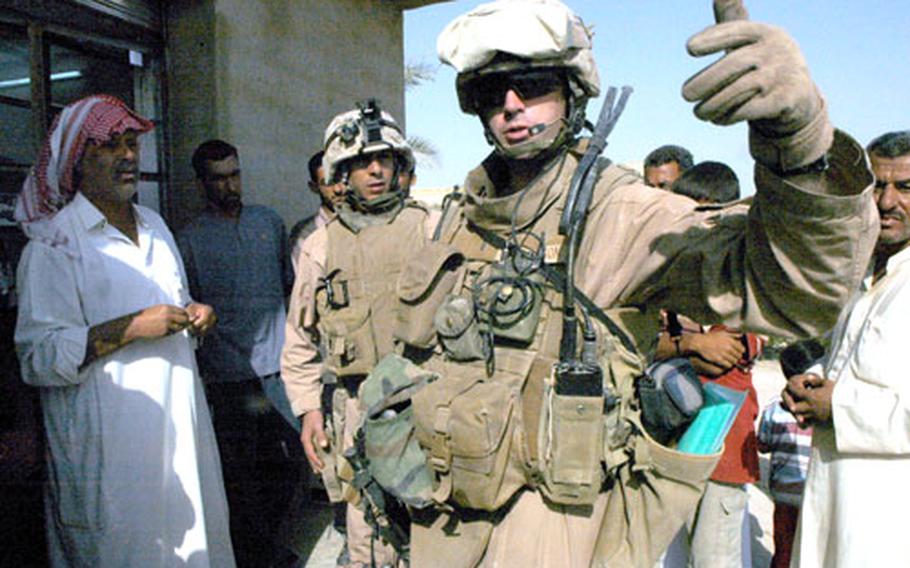 The first step in figuring out civil affairs in a tribal community like Fallujah is finding out who the leaders are and where their territory starts and stops. Lt. Todd Richardson of 3rd Battalion, 3rd Marines gets some clarification on neighborhood borders in Subayht, Iraq. (Allison Batdorff/Stars and Stripes) 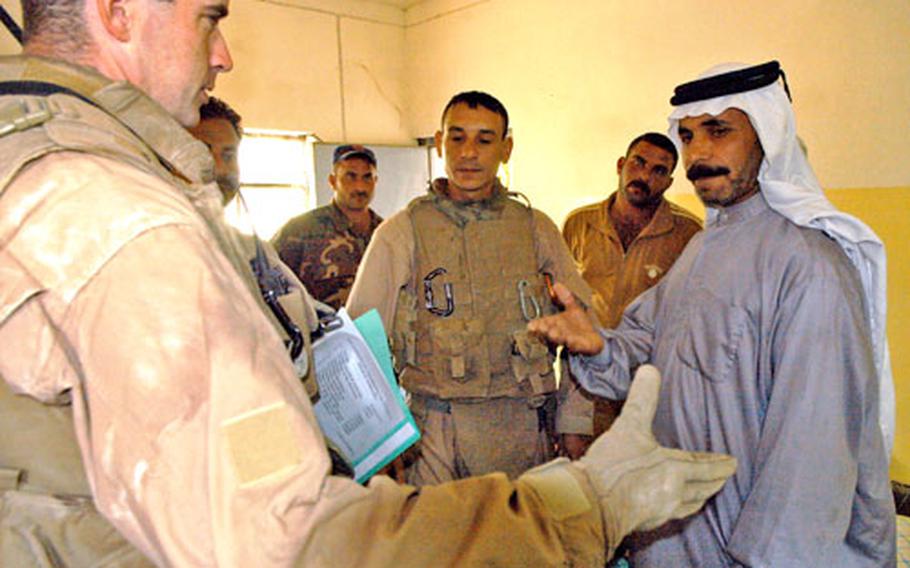 A handshake with a local sheik in the village of Subayht starts the morning for Lt. Todd Richardson, of 3rd Battalion, 3rd Marines. Now on his third deployment to Iraq, Richardson said he’s very happy with work in civil affairs rather than fighting. “This is how we are going to win the war,” Richardson said. “We may kill every insurgent but if we don’t do anything positive, or anything good, then eventually, we’re going to lose.” (Allison Batdorff/Stars and Stripes)

“I never pictured myself doing this when I joined the Marines,” Duffy said.

For those who have deployed to Anbar before, it’s a major change of pace.

“Basically, it feels like the Super Bowl is over, and now we’re cleaning up the stands,” said Lance Cpl. Josh Usselman, 22, of Loris, S.C. “Those of us who have been here before still jump when we hear a pop shot.”

Working with Iraqis on civil-affairs projects was also therapeutic after all the fighting, said Sgt. Benjamin Masters from 2nd Battalion, 5th Marines.

“This time when I leave, I’m going to feel like I did something,” said Masters, 22, of Berlin, Wis. “Before, we had suffered so many casualties all I could feel was hate. Now I realize that the Iraqis are survivors, they do what they can to survive, which is something Americans don’t have to deal with. We’re not done here, but we’ve done a good thing.”

But “quiet” comes with its own challenges, said Maj. Jonathan Bossie. He cautions his Marines not to let their guard down too much, he said. Children run right up to the vehicles now, he said.

“Even though we’re doing more nation-building and less fighting, we still don’t want people getting too close to us and the vehicles,” Bossie said. “I always remind them.”