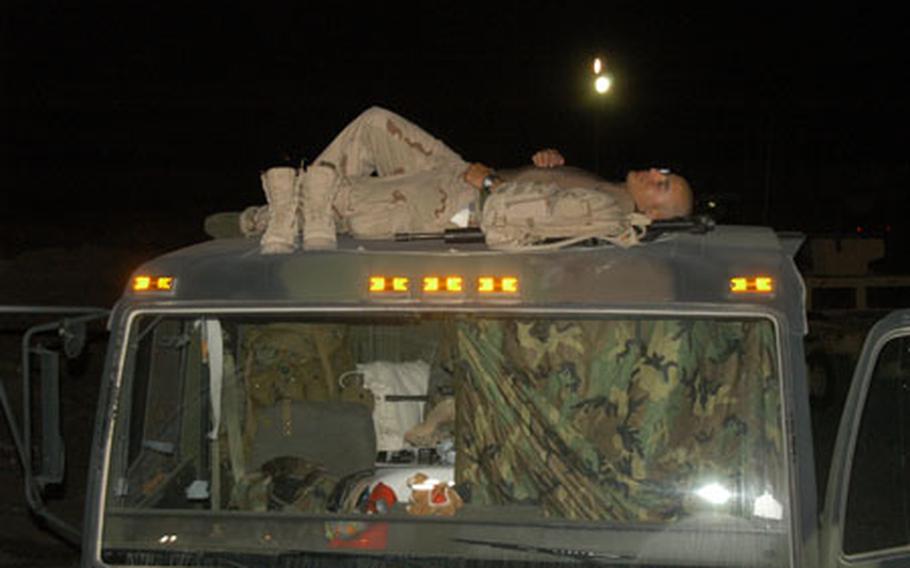 A soldier from 2nd Infantry Division’s 2nd Forward Support Battalion sleeps at Navistar, Kuwait, while waiting to head north into Iraq in this 2004 file photo. (Seth Robson/Stars and Stripes)

BAGHDAD — Adequate sleep has been a rare and precious commodity for U.S. troops in Iraq ever since the invasion four years ago, but in Baghdad and other locations, it can now be scarcer than ever.

Weariness and exhaustion have been familiar to all military ranks and branches, from harried staff officers building PowerPoint displays in the comfort of a former palace to teenage privates guzzling Rip It energy drinks in the gunner’s hatch of a Humvee.

In the last several months, many of those troops who are helping to carry out the new Baghdad security plan are finding sleep even harder to come by.

The plan, aimed at quelling a bloody feud between Sunni and Shiite Muslims, leans heavily on the use of newly created combat outposts and joint security stations. Dozens of the outposts have been established throughout the city, providing company-sized units a base within Baghdad neighborhoods.

While commanders say the outposts have helped enormously in building good will among local residents, some troops complain that the plan is driving them into the ground. These troops say that they are getting even less sleep now, because in addition to conducting increased patrols in their sector, they are tasked with guard duty when they return to their outpost.

On those days that soldiers are allowed to return to a larger forward operating base to refit, soldiers say they are busy conducting vehicle maintenance, getting their laundry, showering and e-mailing families, and cannot take advantage of the time to catch up on sleep.

The Pentagon has no policy requiring that servicemembers in war zones get a certain amount of sleep. But the rule of thumb for ground troops has been to allow at least four hours of sleep in a 24-hour period, with commanders able to use their own discretion.

Two soldiers attached to the 2nd Infantry Brigade Combat Team, 2nd Infantry Division in Baghdad’s east side said recently they had each slept only 14 hours in a week’s time.

Soldiers of the 2nd Brigade, 1st Cavalry Division are instructed to get at least four hours of continuous sleep every 24 hours, as well as two complete meals a day.

But some soldiers and young platoon leaders complained that the requirement has been interpreted to mean that soldiers can operate on just four hours of sleep a day for an indefinite period of time.

First Lt. Lonnie J. Harper, 24, of McKenzie, Tenn., said that the experience was very similar to Ranger School, where lack of food and sleep are infamous stressors.

“It takes a toll on you,” Harper said.

“It’s day after day with no end in sight. It’s like the madness never ends.

“The brass tells us we only need four hours of sleep. Well, that’s true to some extent, but that can’t be sustained for very long.”

Sleep researchers agree that four hours is not enough. People need from six to eight hours of restful sleep a night, experts say. If they’re deprived of adequate sleep for too long, their judgment worsens, possibly affecting the safety of themselves or their units and their ability to carry out their mission. They have poor concentration and short-term memory, mood changes, and irritability, experts say. 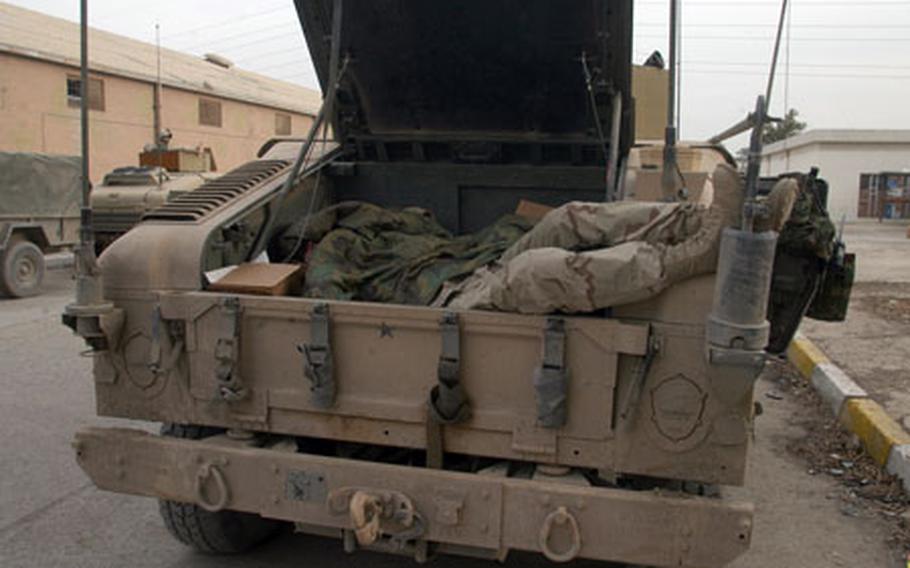 Soldiers grab sleep when they can get it and where they can get it. A soldier from Company C, 4th Battalion, 31st Infantry Regiment, sleeps in the trunk of a Humvee. Soldiers throughout Iraq have had been conducting more and longer missions in preparation for the elections. (Stars and Stripes)

“A lot of people are falling asleep at the [forward operating base] gate and getting Article 15s,” said Navy Lt. Cmdr. David Moulton, a psychiatrist temporarily assigned to Ibn Sina Hospital in Baghdad.

At the hospital, run by the 28th Combat Support Hospital, “you see guys drop off their [injured] battle buddy and go to sleep on the sidewalk,” said Moulton, 37, of Hampstead, N.C.

He said he warned one commander that if he consistently deprived troops of enough sleep time, he’d lose his soldiers.

“I compare it to maintaining equipment,” Moulton said.

“If it’s not maintained, it’ll fail. Same with soldiers. They need a certain amount of maintenance or they’re going to break down.”

In a war without set front lines, and with some troops being exposed to violence at unexpected times, troops’ quality of sleep, too, can suffer.

They might have trouble falling asleep, and if they do they sleep fitfully because it’s noisy or they’re alert for sounds of trouble or they suffer from nightmares from what they’ve experienced.

During the Gulf War, a couple of Bradley fighting vehicles were destroyed by friendly fire in an incident later tied to poor-quality sleep. No one was hurt.

The commanders and gunners who attacked said afterward they had had brief, fragmented sleep for the previous two days, and thought they were firing to the left instead of in front of them, a mental health team found.

The naps appear to be more effective for sustaining performance than low-to-moderate dosages of stimulant drugs, and combining the two can be even more effective, the researchers say.

“For military operations, our recommendation is to ‘nap early, nap often,’they say.

Stars and Stripes reporters Lisa Burgess and Jeff Schogol contributed to this report.

Tips for those in search of shut-eye

Soldiers can wind up trying to sleep in primitive conditions, attempting to ignore the sound of aircraft and people coming and going.

For them, falling asleep can be tough, even if they’re tired and have time to sleep.

Here are some tips from sleep experts:

• Try to create a non-stimulating environment. If you have curtains, close them.

• A sleep mask and earplugs can help, although some worry that they need to be alert to danger.

• Sleep apnea, snoring, restless-leg syndrome and even iron deficiency can cause insomnia, so consult with a physician if you suspect you have these problems.

• If you have a nightmare, try to go to another room to get your bearings. It might take a while to re-orient yourself. Do something relaxing and, if possible, reach out to a sympathetic person.

• Medications are available for quick, short-term relief of insomnia and nightmares. Some can be addictive, so check with a doctor. Some troops use Benadryl, an antihistamine, for its sedative properties, but using it can cause insomnia later.