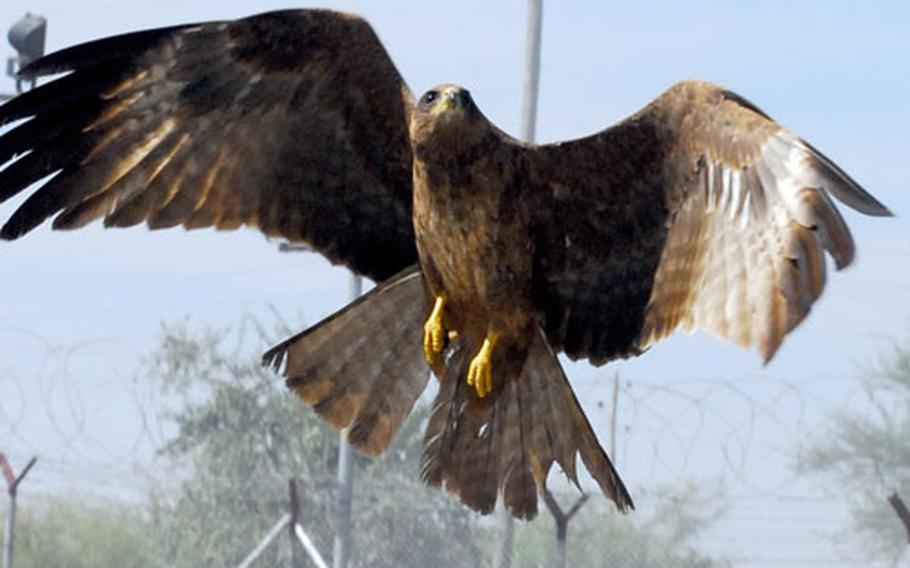 A hawk zeroes in on a snack. (Monte Morin/Stars and Stripes)

The Horn of Africa might be the front line for the Global War on Terrorism, but on some days it looks more like a petting zoo.

U.S. servicemembers deployed to remote Contingency Operating Locations, or COLs, in Ethiopia, Djibouti and Kenya, have plenty of chances to interact with the local wildlife, be they Somali wild asses, spider monkeys, hawks or other exotic creatures.

At Camp Hurso, a tiny COL within the sprawling Ethiopian Training Academy near Dire Dawa, troops with the Guam Army National Guard have raised a pair of small, striped, deer-like creatures since birth. The animals, called kudus, wander the camp, sidling up to soldiers, Seabees, airmen and KBR contractors looking for someone to scratch their neck.

Lunchtime at Hurso is a big draw for scores of hawks that circle above the camp’s flagpole and chow hall. They are looking for handouts from humans, who toss hamburger patties and Buffalo wings to the broad-winged birds. On at least one occasion, an overly enthusiastic hawk swooped down on a to-go meal carried outside by an unsuspecting soldier and flew off with his lunch.

A trip to Dire Dawa’s dilapidated airport to catch a weekly C-130 transport is also a chance for servicemembers to feed the many small spider monkeys that inhabit the thorny scrub surrounding the airstrip. Families of the long-tailed primates snatch canned nuts or bits of power bars from the hands or off the top of the heads of visitors.

“The only thing they don’t like are macadamia nuts,” one airmen said. 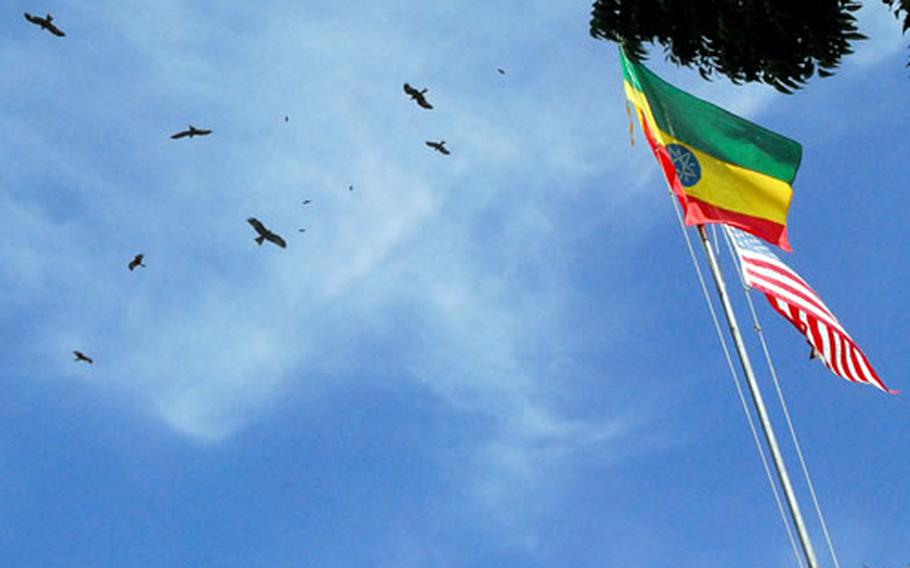 Hawks circle above the flagpole at Camp Hurso. (Monte Morin/Stars and Stripes) 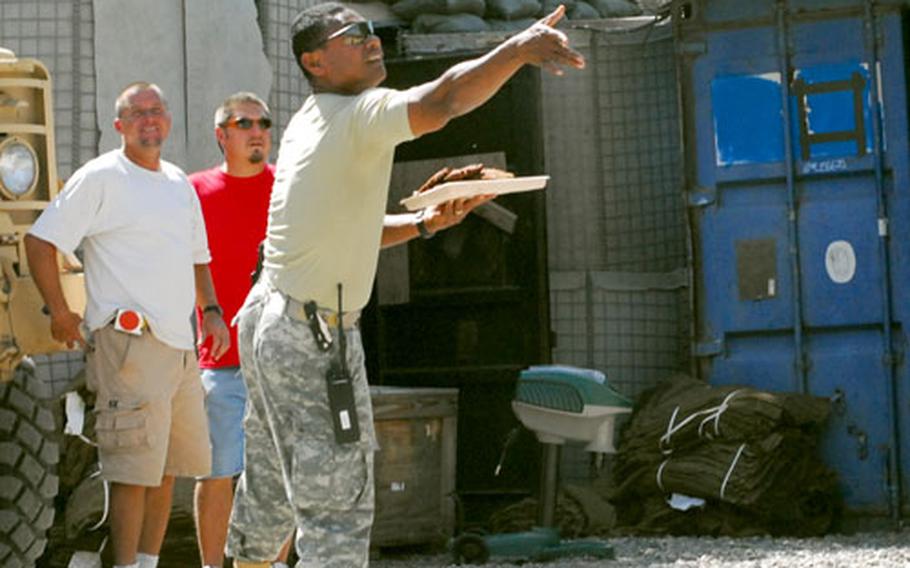 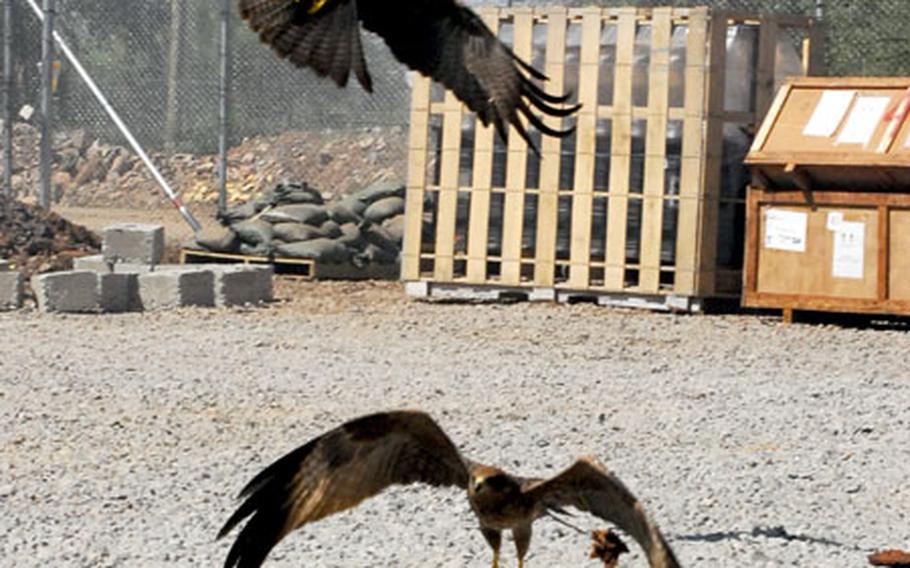 Hawks swoop down beside the dining facility at Camp Hurso in Ethiopia and attempt to grab bits of hamburger thrown to them by soldiers. (Monte Morin/Stars and Stripes)

No place for MySpace

Internet-minded military personnel deployed with the Combined Joint Task Force-Horn of Africa were dismayed about two months ago to learn that they were locked out of MySpace.com, the popular social networking Web site.

“They found out that there was information making its way onto the site that shouldn’t have been there,” one Air Force computer guru said recently. “So they said, if you can’t police yourself, we’re just going to shut the whole thing down. And they did.”

Are we there yet?

Land navigation is a difficult skill to master, even for the most motivated of grunts, but it’s harder still in the Horn of Africa, where entire areas of responsibility are charted on naval maps instead of traditional grid coordinate land maps.

At least that was the view of one longtime U.S. soldier who was deep into a yearlong tour at Camp Lemonier, the Djibouti-based headquarters of the Combined Joint Task Force-Horn of Africa.

After a 30-year army career of using grid coordinate maps, Sgt. Maj. Bill Lee, 59, of Vancouver, Wash., was shocked to arrive in Djibouti and be handed a packet of naval maps that were based on latitude and longitude. He said the maps were particularly frustrating because few of them included topographical elevation, scales, legends or grids. The maps, which he and his soldiers used recently to locate well sites, also failed to differentiate between paved and unpaved roads, a key piece of information for getting around East Africa.

“That was one of the biggest disappointments I had when I got here, the maps,” Lee said. “If I could have one thing here to help me get through this deployment, beside my wife, it’s a decent map.”

Well-drillers in Djibouti are often left to find their way around by odd landmarks, such as pyramid-shaped mountains or debris left on the side of the road.

Such was the case when Staff Sgt. Richard Provitt, 39, of Montgomery, Ala., set out to find his first well site.

“It was out in the middle of nowhere,” Provitt said. “There were no distinguishing features, no nothing.

“We asked the guys who we were replacing, how do you find it? They said ‘See that hill with a tire on it? Well, that’s where you turn.’”