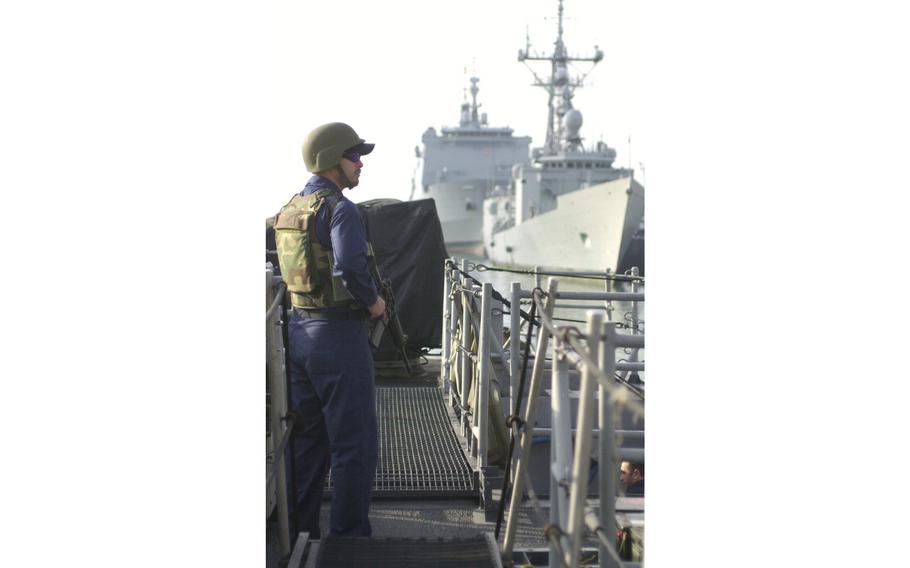 A sailor stands guard aboard the USS Typhoon at Naval Station Rota, Spain. Patrol boats USS Typhoon and USS Sirocco stopped in Rota on their way to the Persian Gulf. (Scott Schonauer/Stars and Stripes)

This article first appeared in the Stars and Stripes European edition, May 19, 2004. It is republished unedited in its original form.

NAVAL STATION ROTA, Spain — Patrol coastal ships are fast, can travel in shallow waters and are armed to the teeth.

But soon after the first Cyclone-class patrol ship was commissioned in 1993, the Navy didn’t want them. Special operations forces found them too big, while the rest of the Navy found them too small.

The Navy planned to decommission the ships and hand them over to the U.S. Coast Guard, but the Sept. 11, 2001, terror attacks and the war in Iraq changed everything.

Once the forgotten and unwanted ship in the fleet, the patrol ships are in heavy demand for homeland defense and maritime interdiction in the Persian Gulf. Crewmembers like to call themselves “cowboys” on the water because they can get much closer to the enemy than the large, surface warships. 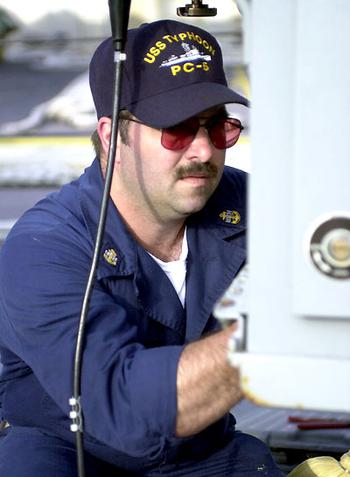 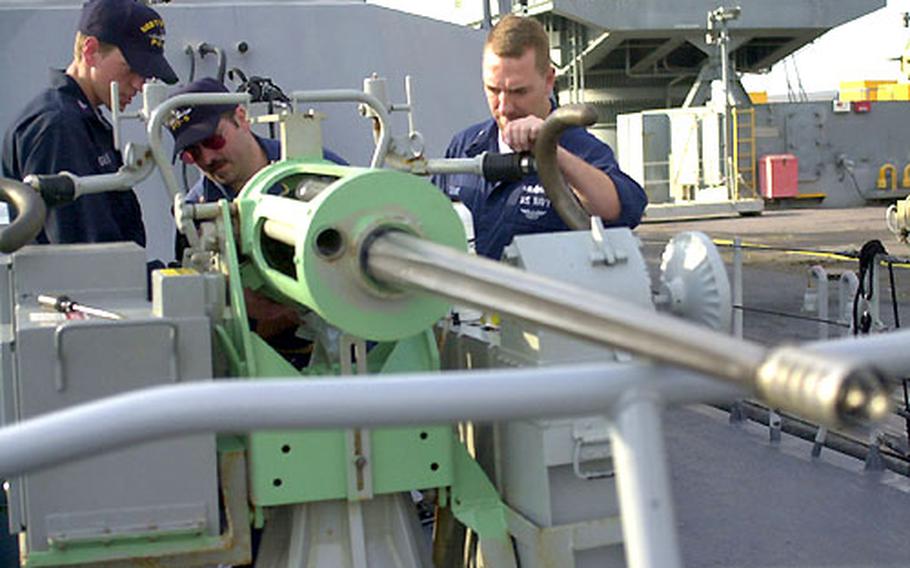 “These things can get up close and personal,” said Lt. Khary Hemoree-Bey, who, at 29, is the USS Typhoon’s commanding officer. “We can go where the other ships can’t.”

The Typhoon and its sister ship, the USS Sirocco, passed through Rota last week on their way to a six-month deployment to the Persian Gulf, where they will help protect coalition ships and Iraqi oil rigs and help catch terrorists.

The ships were initially designed to transport SEAL teams ashore or up rivers, but special operations forces found that the ships didn’t meet their needs. The Navy planned to get rid of most of the ships in 2002 and handed the first commissioned ship to the U.S. Coast Guard.

But commanders soon found a need for the ships in the hunt for terrorists.

The ships have since been used for everything from homeland security to interdiction operations.

The patrol ships are only 170 feet long and 26 feet wide, and carry a crew of 28 sailors. The dimensions and the small team onboard are what make duty aboard a patrol boat one of the most unique in the Navy, crewmembers say.

There is no wardroom for officers. Everyone eats in the same mess deck, which has a small kitchen, two tables and a large flat screen TV. The ship’s cook makes lunch and dinner, but everyone is on their own for breakfast.

To stay in shape, sailors have to make the most of what little they have.

That could mean using a bar toward the back of the ship to do chin-ups or going swimming when time allows. There is no Nautilus equipment or treadmills. There’s no room.

Those who thought life onboard an aircraft carrier or destroyer was boring have never been on a patrol ship.

Books and DVD movies make up the bulk of entertainment. There is no ship store, but they do have a lone vending machine. Soda is 50 cents, with 25 cents going into the ship fund.

While the recreational activities are few and far between, sailors have little time to enjoy leisure activities anyway. Most sailors are too busy to do much else other than sleep or work. 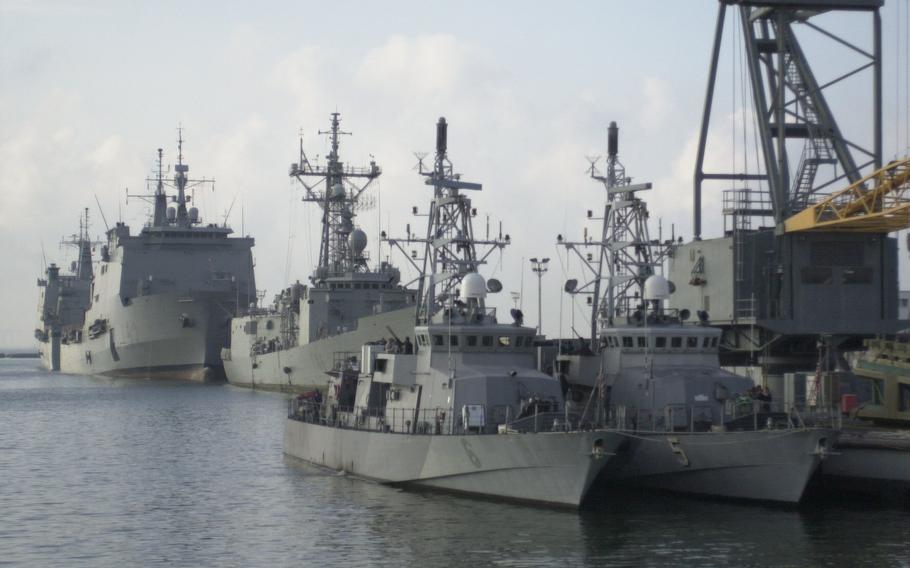 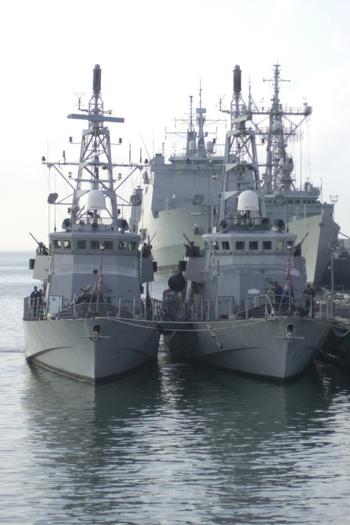 This is no ship for slackers. Everyone has several jobs and duties.

For example, the ship’s chef, also known as a culinary specialist, doubles as a gunner and can shoot a Stinger missile off the deck, if needed.

Navy Petty Officer 1st Class Tim Herbin is a Navy code breaker, or what the Navy calls a cryptologic technician. But aboard the USS Typhoon, he’s also a boatswain’s mate, a photographer and information technician.

“It’s incredibly hard to do everything well,” Herbin said. “But everyone on the ship is a piece in the puzzle.”

Each crewmember is expected to pull their weight. If not, it affects the entire ship, said Hemoree-Bey.

“On this ship, it’s not your rating, it’s what you’re good at,” Hembree-Bey said.

Because sailors must take on so many extra jobs, they often work long, tedious days that require plenty of strong coffee.

While one might expect having such a small group on a small ship makes the environment ripe for angry confrontations, Brown said there are actually fewer personality problems than one would expect.

“A lot more is tolerated,” Brown said. “Because there’s no way you can get away from them.”

Sailors also have to have a strong tolerance for rough seas. Four-foot waves can make many sea-virgin sailors hurl. Herbin compared traveling in a patrol in bad weather to being inside a Coke can and having someone violently shaking it up.

He’s never gotten sick, but he recommends that new sailors make sure they bring a good supply of seasick pills.

“You don’t want to leave without them,” he said.