2003: A year of trials and tragedy in Pacific 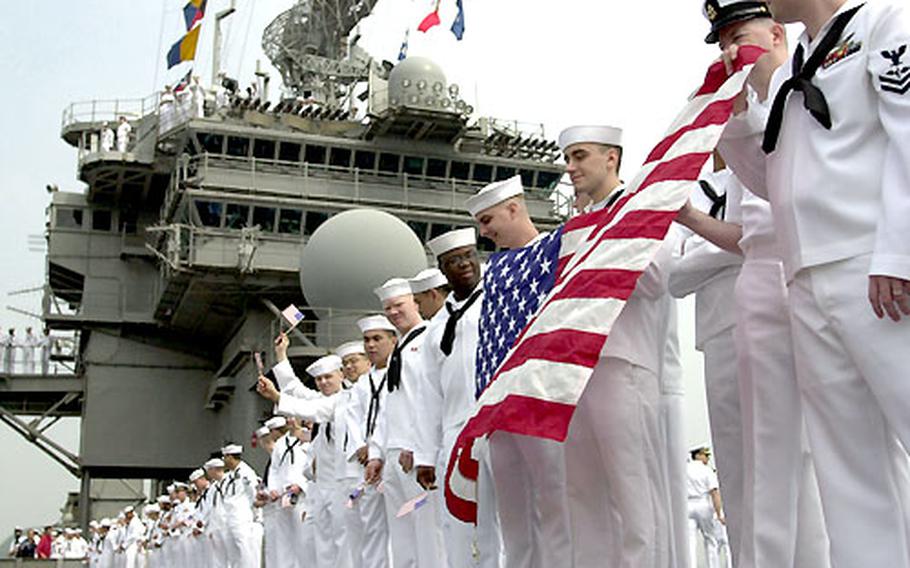 USS Kitty Hawk sailors man the rails, flags in hand, as the ship pulls into Yokosuka May 6 following its Persian Gulf deployment. (Joseph Giordono/Stars and Stripes)

From the friendly-fire loss of a USS Kitty Hawk pilot during the war in Iraq to an already-painful Yokota trial that turned heart-rending when the accused was found dead the day he was to appear in court: For the U.S. military in the Pacific, 2003 was marked by tragedy both public and personal.

Upheaval was a common theme. The Kitty Hawk Battle Group commander was fired mid-ocean, even as his ships girded for war. Status of forces agreements between the United States and host nations were attacked as unfair. And a U.S. Marine major’s controversial — and occasionally astounding — Okinawa rape trial dragged into its second year.

But 2003 also brought good news. The North Korean nuclear crisis appeared to cool somewhat. More Marines on Okinawa will be allowed to have accompanied tours. Defense officials granted increased living allowances and pay raises to offset the effects of struggling economies. An agreement was reached on shuffling U.S. bases and thousands of troops in South Korea.

Here are the top twelve Pacific news stories of 2003, as selected by Stars and Stripes reporters and editors:

YOKOSUKA NAVAL BASE — Previous at-sea training and a Persian Gulf deployment kept the USS Kitty Hawk Battle Group at sea for 80 days — from Jan. 20 until May 6.

During the deployment, friendly fire claimed the life of a Navy F/A-18 pilot from the carrier, Lt. Nathan D. White, 30, of Abilene, Texas. A U.S.-fired Patriot missile downed White’s fighter around 11:30 p.m. April 2 over Iraq. White, with Strike Fighter Squadron 195, the Dambusters of Atsugi Naval Air Facility, Japan, was the only Navy aviator to be killed in the Iraqi war.

The Kitty Hawk, USS Cowpens and USS John S. McCain left the Persian Gulf on April 13. After returning, the carrier was put in dry dock for several months of routine maintenance and upgrades.

Even as South Korea and the United States celebrated the 50th anniversary of the Korean War armistice, tensions over North Korea’s nuclear ambitions continued. With North Korea threatening to expand its nuclear arsenal — various intelligence estimates say Pyongyang already has developed at least two nuclear weapons — and continuing to process enriched uranium and plutonium, the Bush administration responded with pressure.

As the war in Iraq began, analysts fretted about whether Kim Jong Il would spark a crisis. As the months went on, six-nation talks helped bring all sides to the negotiating table. No formal agreement had been reached by year’s end, but both sides had indicated a willingness to bend from their positions.

U.S. and South Korean officials agreed to move thousands of U.S. troops to consolidated hubs and remove all forces from Yongsan Garrison, the largest post in Seoul. But negotiators failed to agree on a timetable or how to pay for the plan.

Forces at Yongsan Garrison are to be moved to Camp Humphreys in Pyongtaek by 2006. Many small 2nd Infantry Division camps would close; forces would move onto hubs at Uijongbu’s Camp Red Cloud and Tongduchon’s Camp Casey. Eventually, those forces would move south of the Han River.

For years, many South Koreans have called for U.S. troops to move out of the massive, 800-acre Yongsan Garrison in South Korea’s capital. U.S. officials agreed. But other South Koreans said U.S. forces should not move while North Korea’s nuclear weapons program is active. 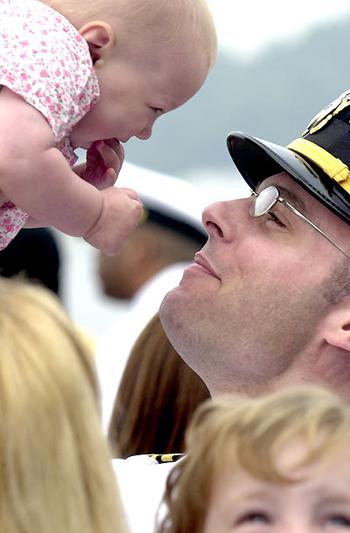 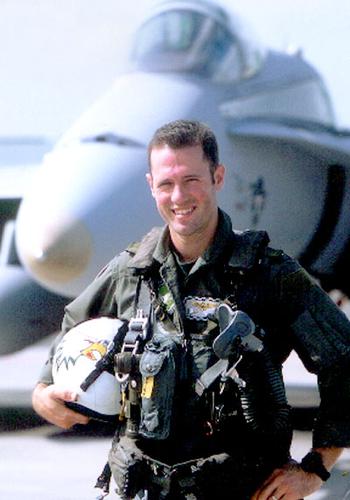 Navy Lt. Nathan White, an F/A-18 pilot from Atsugi Naval Air Facility and the USS Kitty Hawk, was shot down and killed in a "friendly fire" incident over Iraq April 2. (Courtesy of U.S. Navy) 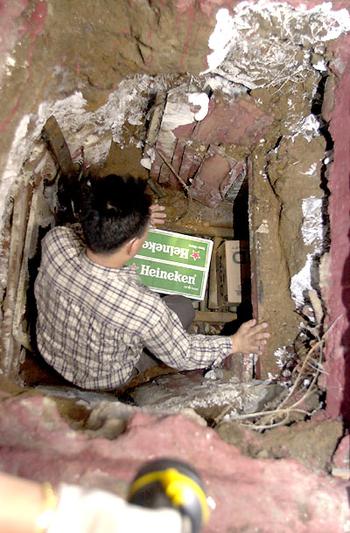 A South Korean customs agent stands in a tunnel that smugglers used to move 62,000 cases of wine and beer from a Hannam Village storage container to a fake storefront off-base. The two-year scam netted two men nearly $2 million. (Joseph Giordono/Stars and Stripes) 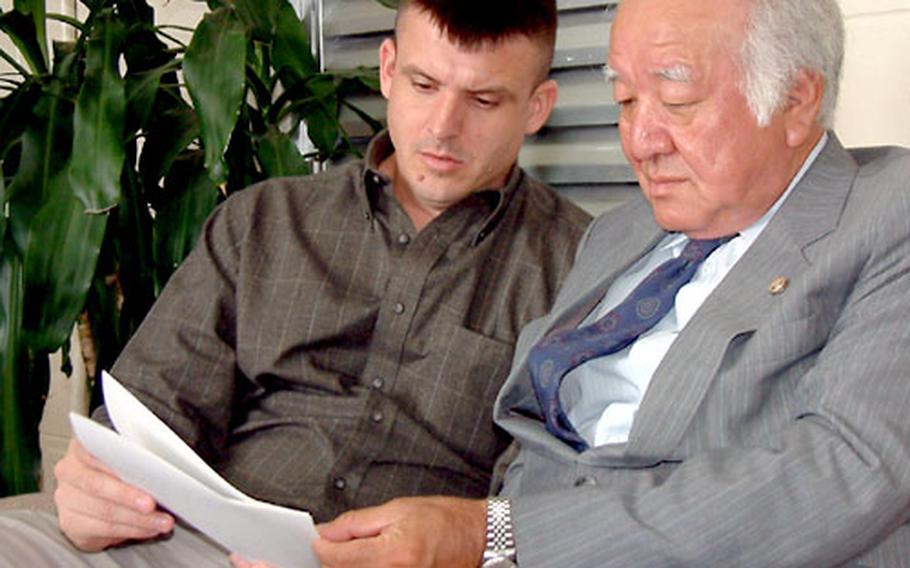 Marine Maj. Michael Brown and his attorney, Toshimitsu Takaesu, read a letter Brown presented to the U.S. Consulate on Okinawa requesting assistance from Ambassador Howard Baker concerning his ongoing trial on a charge of attempted rape. Brown was indicted Dec. 19, 2002; his trial is to resume Jan. 15. (David Allen/Stars and Stripes)

YOKOSUKA NAVAL BASE — USS Kitty Hawk Battle Group Commander Rear Adm. Steven Kunkle was relieved of command Feb. 13, accused of an “inappropriate relationship” with a female officer resulting in “a loss of confidence in his ability to command.”

Kunkle, assigned temporarily to Commander Naval Forces Japan, received a letter of reprimand. He’d been at the battle group’s helm since September 2001, when he took over from Robert G. Willard — the vice admiral who, as 7th Fleet commander, relieved him of command.

Brown is accused of attacking a Philippine barmaid who’d given him a ride after the Camp Courtney Officers Club closed in the early morning hours of Nov. 2, 2002.

His trial began in March with something rare for a Japanese court — a not-guilty plea — and has been punctuated with surprises ever since.

The biggest may have been when the barmaid, Victoria Nakamine, 40, recanted the charges in May, contending police and prosecutors coerced her into filing them.

Prosecutors later said Nakamine received $13,500 the day before she recanted the charges. The money’s source, however, never was disclosed; prosecutors later backed away from drawing any direct Nakamine-Brown connection.

The judges have not ruled on accepting that evidence because the trial was suspended in October after Brown requested they remove themselves because of prejudice. The appeal wound its way to Japan’s Supreme Court, which dismissed it. Brown’s trial is to resume Jan. 15.

In the early hours of Aug. 12, a South Korean highway patrol spotted U.S. Army Maj. Richard K. Hart struggling to hoist a large plastic package over the side of a bridge near Incheon International Airport. Minutes later, they arrested him — and discovered the plastic wrapping contained the nude body of Patricia Ann Hart, his wife.

Prosecutors said Hart murdered his wife with premeditation, then attempted to hide the evidence by dumping her body from the bridge. Defense attorneys said the death was the accidental result of a fight, partly fueled by the history of violent encounters between Hart and other family members.

At year’s end, the decision on whether to advance to a formal trial remained in the hands of the Article 32 hearing officer and a commanding officer.

Status of forces agreement with Japan

U.S. officials were reluctant to allow the pre-indictment turnover of U.S. servicemembers — and their Japanese counterparts bristled at the U.S. request to have American officials present during servicemembers’ questioning.

Servicemembers in U.S. military custody when charged with Japanese felonies usually are not handed over until indictment. And under Japan’s legal system, suspects have no right to an attorney during police questioning.

In December, the Okinawa Bar Association called for SOFA changes, some of which would strengthen rights of U.S. servicemembers accused of crimes. Toward updating the 43-year-old pact, the lawyers’ group proposed supporting early turnover of defendants, letting defendants have legal representation during questioning and allowing videotaping of interrogations.

The lawyers said the SOFA lacked provisions that “protect the due human rights” of SOFA personnel. And, said Tsutomu Arakaki, Okinawa Bar Association chairman, “Providing adequate human rights to SOFA personnel will lead to the introduction in Japan of a judicial system that meets international standards, which, consequently, would be beneficial to Japanese citizens.”

After months of allegations the U.S. military supports a sex industry outside its installations, the Defense Department’s Inspector General investigated whether U.S. military courtesy patrols were in effect providing security for soldiers visiting prostitutes. Bases also launched aggressive campaigns to educate soldiers and warn they could be prosecuted for soliciting prostitution.

The IG found the military has a good education program but some military police appeared too friendly with bar owners. U.S. Forces Korea banned more than two dozen bars in Itaewon and a handful of bars near other military installations. Patrols put bars selling sex off-limits, posting signs at exit gates around bases. USFK also set up a hot line to report problems related to trafficking of women.

Marines and their families had mixed views on October’s announcement that one-year unaccompanied tours to Okinawa will be replaced with two- or three-year tours.

That means the number of Marine dependents on island could grow from 9,700 to 12,200 by 2008, when the program would be fully implemented.

The change would not affect the 29 percent of Marines on Okinawa for six- and seven-month unit deployments. Of the remaining permanent personnel now assigned to Okinawa, about 75 percent are on the island on unaccompanied 12-month tours.

Tunnel dug under base wall to smuggle booze

Among the more audacious recent smuggling schemes, two South Korean men were busted for smuggling 62,000 cases of beer and wine by tunneling under a U.S. housing compound wall in Seoul. One formerly had managed Hannam Village’s Army and Air Force Exchange Services shopette.

The two men built a 60-foot long tunnel system, complete with moving rails that let them slide cases of beer and wine down a slight grade. The tunnel connected a metal shipping container inside the base wall with a “front” coffee shop just outside the gate. Customs officials said the men would run the shop during the day, then spend night hours piling the alcohol into one of their cars.

After they successfully moved booze off base for more than two years — netting almost $2 million — a tipster alerted Seoul customs officials. Late this year, the pair were sentenced to three years in prison and fined $1.6 million.

Just weeks after the tunnel was discovered, three men were arrested for smuggling thousands of cases of cold medicine, lotion and ham — among other goods — intended for shelves on Camp Casey. Two of the men were AAFES employees, police said.

For the first time, soldiers in South Korea got a cost-of-living allowance starting in July, ending a long-standing gripe that the country was just as expensive as Japan or Germany but no extra money was granted.

Outdated surveys had prevented soldiers from getting a COLA in South Korea. But after finance officials launched an aggressive survey of servicemembers’ current buying habits, the Defense Department Per Diem Committee decided to grant a COLA that meant hundreds of extra dollars in soldiers’ paychecks.

In Japan, when the U.S. dollar hit three-year lows against the yen this fall, U.S. servicemembers received cost-of-living allowance increases to help offset the effects.

Since August, COLAs for servicemembers in Japan have risen as much as 10 points; each point is worth about $20.

Yokota shocked by death of NCO

YOKOTA AIR BASE — Chief Master Sgt. Winfred B. Harrison, 44, was found dead Aug. 7, the day he was supposed to be in court facing charges of being absent without leave and obstructing justice and two counts each of cruelty and maltreatment, assault and indecent acts.

Yokota officials have yet to release autopsy results that might help determine cause of death.

After Harrison failed to appear in court, his body was found in a squadron building. Testimony at pretrial hearings indicated the government would argue Harrison tried to develop inappropriate and close personal relationships with two subordinate airmen.