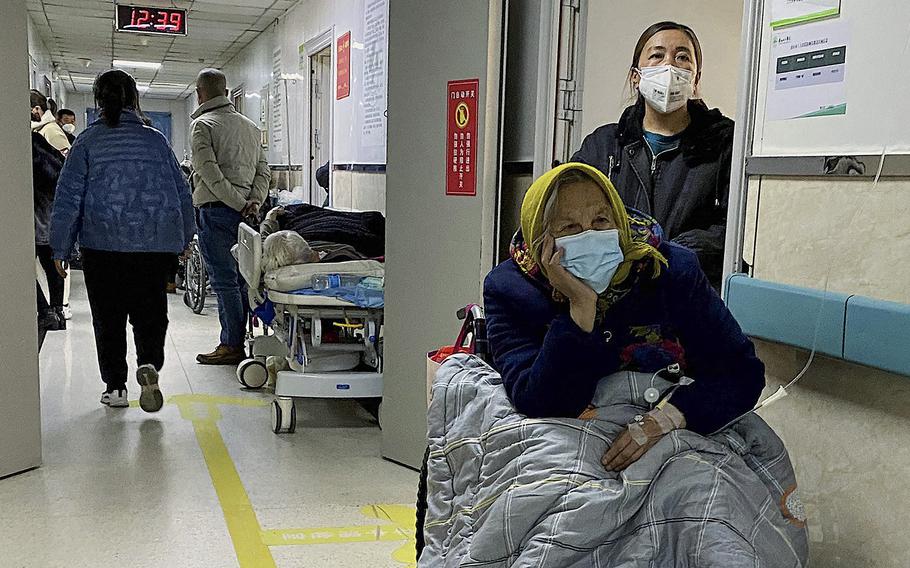 A patient with Covid-19 rests in a wheelchair in a hallway at Tangshan Gongren Hospital in China’s northeastern city of Tangshan on Dec. 30, 2022. (Noel Celis/AFP/Getty Images/TNS)

(Tribune News Service) — China could see as many as 25,000 deaths a day from COVID-19 later in January, casting a shadow over the start of the first Lunar New Year festivities without pandemic restrictions.

Mortalities from the contagious respiratory illness will probably peak around Jan. 23, the second day of the annual holiday in the country of 1.4 billion, according to Airfinity Ltd., a London-based research firm that focuses on predictive health analytics. Daily infections will peak 10 days before at around 3.7 million cases, the researcher said.

China suddenly ended its COVID zero policy about a month ago, abandoning the strict testing and lockdown measures embraced by the world's second-largest economy since the start of the pandemic almost three years ago. The resulting outbreaks have been difficult to gauge without an accurate count, forcing observers to rely on outside estimates and anecdotal evidence.

"Using the trends in regional data our team of epidemiologists has forecast the first peak to be in regions where cases are currently rising and a second peak driven by later surges in other Chinese provinces," Airfinity said in a statement late on Thursday.

Daily infections are currently at around 1.8 million, with mortalities at 9,000, the researcher said. That's up from the 5,000-plus daily estimate by Airfinity earlier this month, and contrasts sharply with just around a dozen COVID deaths the Chinese government has reported in total since the dismantling of COVID restrictions in early December. By the end of April 2023, China may see 1.7 million deaths from this wave of infections, Airfinity said.

Airfinity's estimates are based on data from China's regional provinces, which had reported numbers far higher than official national figures, combined with trends seen in Hong Kong, Japan and other countries when they lifted strict restrictions, the researcher said.

Wu Zunyou, chief epidemiologist at the Chinese Center for Disease Control and Prevention, said in a briefing Thursday that COVID outbreaks have peaked in Beijing, Tianjin and Chengdu. The situation in Shanghai, Chongqing, Anhui, Hubei and Hunan remains serious, he added.

The disease will probably spread during Lunar New Year, with many expected to travel around the holiday, he added. With the lifting of travel and other restrictions for the first time since the start of the pandemic, a huge rebound in travel is anticipated during the holiday week in January.

The CDC plans to estimate how many additional deaths resulted from the ongoing COVID outbreak, Wu said in the briefing. Excess mortality figures gauge the difference between the number of deaths caused during the current COVID wave and the number of fatalities expected had the pandemic not occurred, and has been used around the world as it's meant to provide a more comprehensive snapshot of COVID's impact.

"The deaths caused by COVID is a worldwide concern," Wu said. "By calculating excess mortality, we can figure out what could have potentially been underestimated."

The CDC team has previously done a similar excess mortality analysis for the initial outbreak in the central Chinese city of Wuhan, where COVID first emerged. The National Health Commission added nearly 1,300 deaths from the city into its COVID death count in April 2020.

Since the earliest days of the pandemic, China has been lambasted for its initial handling of the outbreak, including the transparency of reporting on its scale. The official tally for COVID infections has become all but meaningless as the once ubiquitous network of PCR testing booths shut.

With scenes of overwhelmed hospitals playing out across the country, officials on Thursday said some regions are now grappling with a surge in severe COVID patients. The occupancy rate of intensive care unit beds for the whole country hasn't crossed the red line of 80%, but some parts of the nation are bracing for a peak in severe cases, said Jiao Yahui, an official overseeing hospitals at the National Health Commission.

The jump in cases has fueled concern across the globe about the emergence of new COVID variants that could be more contagious, lethal, or both. That has prompted numerous countries to adopt mandatory testing and entry restrictions for travelers from China, which also announced this week that it would reopen its borders on Jan. 8.

Liang Wannian, China's senior official overseeing epidemic response, said the country is strengthening the monitoring of COVID variant and will report to the World Health Organization if it discovers any.