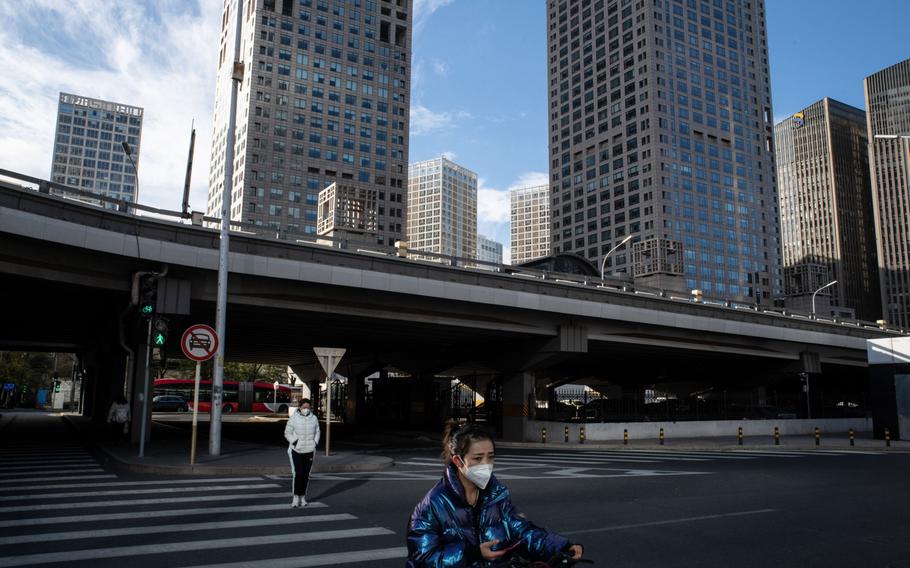 A near-deserted road in Beijing, on Nov. 26, 2022. China's daily coronavirus infections broke through 30,000 for the first time ever, as officials struggle to contain outbreaks that have triggered a growing number of restrictions across the country's most important cities. (Bloomberg)

Two top U.S. health officials questioned China's "zero covid" policy, saying it's unlikely to rein in the virus on its own and makes little sense without an improved vaccination campaign to broaden immunity.

"It's going to be very, very difficult for China to be able to contain this through their Zero Covid strategy," Ashish Jha, President Joe Biden's response coordinator for the pandemic, said on ABC's "This Week" on Sunday.

Jha and Anthony Fauci, who has been Biden's chief medical adviser and the face of the U.S. response for much of the pandemic, were responding to questions about protests against coronavirus restrictions that spread across Chinese streets and universities as citizens vent anger at local officials and the ruling Communist Party.

"I would recommend that they pursue the strategy making sure everybody gets vaccinated, particularly their elderly," Jha said. "That, I think, is the path out of this virus. Lockdowns and Zero Covid is going to be very difficult to sustain."

Police were out in force in some areas where huge crowds gathered in Shanghai, after protesters at one location on Saturday called for President Xi Jinping to step down, a level of national dissent unheard of since he took power a decade ago.

"Their approach has been very, very severe and rather draconian," Fauci said on NBC's "Meet the Press." "They went into a prolonged lockdown without any seeming purpose or endgame to it, which really doesn't make public health sense."

Fauci said China's vaccines are less effective than those made by companies such as Moderna, Pfizer and Johnson & Johnson. Even so, China's government appears to be locking down without a good strategy of "preparing yourself for opening," he said on CBS's "Face the Nation."

Fauci gave interviews to several U.S. network news shows on Sunday before stepping down next month as director of the National Institute of Allergy and Infectious Diseases, which he has led since 1984.