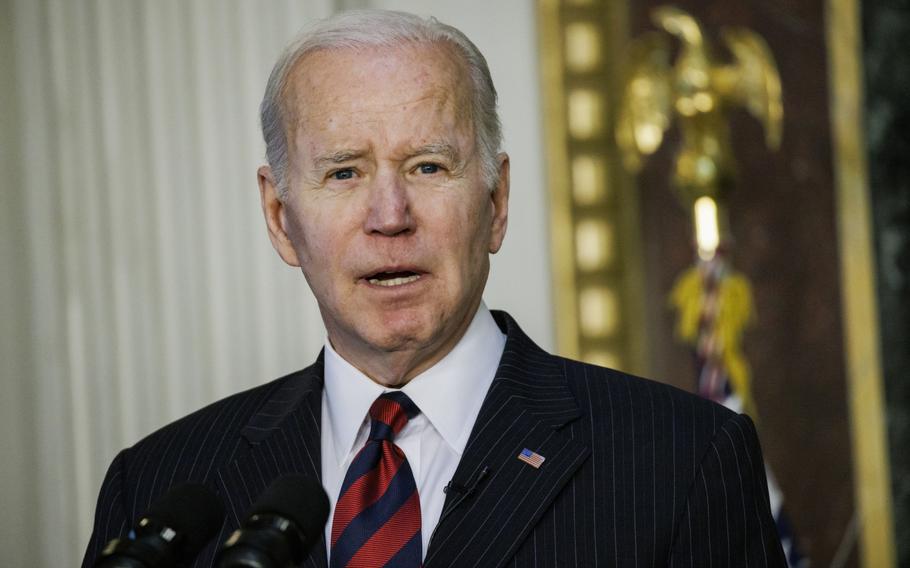 WASHINGTON — The White House is mounting another effort to secure additional funding for the nation's COVID response in the lame-duck session of Congress, with officials preparing this week to argue that billions of dollars are needed for a new generation of vaccines and treatments, even as Republicans continue to raise questions about the funds already allocated.

Biden officials are finalizing a request for about $10 billion in additional public health funds by year's end, part of a larger request that would also include funding for Ukraine and disaster relief for hurricane damage in Florida, according to six people who spoke on the condition of anonymity to describe confidential budget discussions. Officials plan to seek $8.25 billion for domestic COVID-response efforts, including a successor to Operation Warp Speed that some call "Project COVID Shield," intended to jump-start development of next-generation coronavirus vaccines and treatments.

Officials also are debating about $2 billion that would go toward other health efforts, including about $1 billion for the global COVID response, as well as about $750,000 to combat problems such as hepatitis C and monkeypox.

Senior health officials and outside experts say that more funding for the COVID response is desperately needed, pointing to lagging uptake of new coronavirus booster shots that could benefit from public education campaigns, the fading efficacy of existing antivirals and the demand for new vaccines and treatments that will work against future virus variants.

"While COVID-19 is no longer the disruptive force it once was, we face new subvariants in the U.S. and around the world that have the potential to cause a surge of infections, hospitalizations, and deaths …" wrote one of the individuals familiar with the budget discussions. "That's why we're requesting $10 billion to meet immediate short-term domestic needs for resources like treatments; to accelerate the research and development of next-generation vaccines and therapeutics; to increase research into long COVID; and to support the global response to COVID-19. Our request also includes funding to combat other infectious diseases that pose a threat to national security."

Officials had initially targeted between $15 billion and $20 billion in additional COVID funding, before scaling back their planned request at the request of the president. He wanted to proceed cautiously after the collapse of prior attempts to secure COVID funding. The timing of the new request also has been in flux as officials waited to see which party would control Congress next year, with the outcome of more than a dozen House races still to be determined. Democrats' best chance of success may come in the lame-duck since they still control both congressional chambers.

"The supplemental requests that we keep putting in … just because they don't go anywhere, doesn't mean the need for them disappears," Anthony S. Fauci, the government's top infectious-disease expert, said in an interview last week.

But the effort to secure more COVID funding comes amid waning public interest in combating the virus. Just 2 percent of respondents to exit polls in last week's elections said the pandemic was the most important issue facing the country; pharmaceutical companies have begun pulling back on COVID-related product lines as government funding dries up; and charitable organizations are also pivoting away from prioritizing the virus response.

"What we're seeing with many foundations is there are cycles of panic and neglect: Put a lot of money and a lot of effort into the crisis of the day, and then … the funding dries up," Rick Bright, who recently left the Rockefeller Foundation after it folded his pandemic institute into a broader initiative, told Science magazine in October.

A Rockefeller Foundation spokesperson pointed to more than $60 million in pandemic-related investments, including a $55 million donation earlier this year to help with global vaccine rollout.

The push for more COVID funds is expected to collide with GOP resistance, after Republicans repeatedly called on the Biden administration this year to explain how it spent billions of dollars previously allocated to the fight.

In one previously unreported flash point, Republicans on the Senate's health committee this summer zeroed in on a nearly $150 million contract awarded to accounting firm KPMG last year to help distribute monoclonal antibodies, a COVID treatment that must be administered in a health care setting.

While federal officials had already distributed the intravenous treatments to more than 5,000 hospitals, physicians' offices and other care settings, White House leaders initially trumpeted the contract with KPMG, saying the firm's personnel and logistics expertise would enable it to supplement federal efforts to expand access to the treatment, particularly in medically underserved areas.

"This new effort is going to speed assistance to hard-hit communities, really increasing the use and administration of the monoclonal antibody therapies, preventing hospitalization and death," Marcella Nunez-Smith, who oversaw the White House's health equity efforts, said at a briefing in March 2021.

Participating health centers, such as UMass Memorial Medical Center and Baptist Memorial Health Care in Jackson, Miss., worked with KPMG on efforts to promote the treatment, such as producing radio advertisements and distributing flyers.

"I think it was very beneficial," said Vicki Brownewell, a nurse executive who oversaw monoclonal infusion centers in the Houston Methodist health system. Brownewell said the KPMG partnership allowed Houston Methodist to set up free, virtual visits in the summer of 2021, which helped the system quickly schedule appointments for infusions for COVID patients.

"Two hundred and eleven patients took advantage of those free, virtual urgent care visits — but we know that we touched many, many more patients than that," Brownewell added.

But four current and former administration officials who spoke on the condition of anonymity to describe federal COVID strategy said the KPMG contract produced work that was ultimately deemed duplicative.

For instance, KPMG set up a now-defunct website — crushcovid.com — that explained the benefits of monoclonal antibodies and encouraged patients to seek them out, providing a list of possible treatment sites. But the website only listed the hospitals working with KPMG across 18 states, rather than providing the complete list of thousands of monoclonal infusion centers across the country, which were available on another website run by the federal government. The KPMG website also did not allow patients to register for treatments, instead urging them to contact health centers.

Overall, the KPMG contract resulted in about 55,000 monoclonal antibody infusions, representing about 3 percent of the more than 1.5 million infusions done across the country in the same period, said two of the former officials.

The contract was quietly paused in September 2021 as the Biden administration reviewed its broader monoclonal antibody strategy, and was wound down by the end of last year, amid Senate Republicans’ questions about why the funds were awarded in the first place — with GOP lawmakers saying they still don’t have sufficient answers.

"I am, once again, asking your agency to explain why up to $142 million was spent with an accounting firm to administer medicine to sick Americans," Sen. Richard Burr, the top Republican on the Senate's health committee, wrote to the Department of Health and Human Services in a July letter shared with The Washington Post, along with an accompanying memo. "This is grossly unacceptable."

In response to questions from The Post, HHS defended the arrangement with KPMG as an appropriate effort to boost monoclonal antibody infusions and said the government spent about $45 million on the contract. About $98 million in additional funds were not awarded because the contract was canceled, HHS said.

Two administration officials briefed on the KPMG contract privately conceded that it was not a good use of federal money. But they say that the current COVID funding needs are clear and pressing — including the need for a new generation of treatments, such as monoclonals intended to be more durable than those currently in use — a position echoed by outside experts and allies.

Tom Inglesby, who stepped down as the White House coronavirus testing coordinator earlier this year and who leads the Johns Hopkins Center for Health Security, pointed to the declining efficacy of Evusheld, a treatment that millions of immunocompromised people have relied upon as long-term protection against coronavirus, but which has shown less potency against new omicron variants. Biden officials warned earlier this year that without more funding from Congress, they would not be able to provide a replacement for Evusheld.

"There is a scientific path towards getting the next-generation Evusheld so that it could protect immunosuppressed people — but they're not able to move forward on that path because they need research dollars, development dollars," said Inglesby, adding that similar issues are delaying other urgent needs.

"This whole chain of support, from the development of vaccines and distribution of vaccines to encouraging people to get vaccinated, that all is getting wound down or turned off, because of the absence of funding," he said.