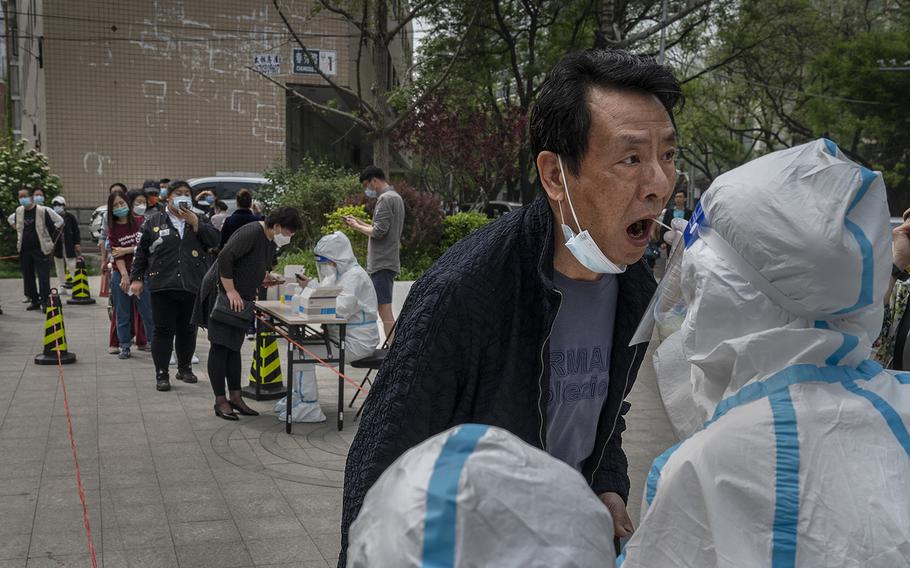 A man is given a nucleic acid test to detect COVID-19 by a health worker at a makeshift testing site in Chaoyang District on April 25, 2022, in Beijing, China. (Kevin Frayer/Getty Images/TNS)

(Tribune News Service) — China's top health officials said a sweeping overhaul to its COVID Zero playbook was a refinement of rules and not a relaxation of controls, dismissing interpretations that the changes were a step toward living with the virus.

The changes, which include reining in mass testing and banning local officials from overzealous lockdowns, come from "a better understanding of the virus, and better research and development of vaccines," deputy head of the National Health Commission Lei Haichao said at a Saturday briefing.

Still, they did not rule out a further easing of the rules. When asked about one day shuttering centralized quarantine camps, Wang Liping, a researcher at the Chinese Center for Disease Control and Prevention, said China's COVID playbook would continue to be guided by science. Later, Lei re-iterated that the government would "keep advancing in small steps."

The messaging came as a clear riposte to market euphoria over the 20 new measures to guide COVID-19 control, the announcement of which sent Chinese assets surging on Friday as investors cheered a potential shift away from the virus approach that's exacting a growing social and economic toll.

"I have to emphasize in particular that strict COVID prevention and control and the optimizing measures must be combined and implemented at the same time," Chang Jile, deputy director of the NHC's Bureau of Disease Prevention and Control, said at the briefing.

China's large population and other factors mean it can't "lie flat" like other nations, the officials said. There is still a "significant gap" between the medical resources China has and those in developed countries, Lei said, adding that the country has fewer than four intensive care beds for every 100,000 people.

Chang said the new measures were made after assessing figures to ensure virus-spreading risks will be controllable. He said that only about three in 100,000 contacts of Covid close contacts test positive, a "very low" chance, and the cut of isolation time can save 30% of centralized quarantine resources.

Change has come quickly on the ground across China as cities reduced mass COVID-19 testing and released people from quarantine camps according to the new guidelines, even as the national caseload continued to rise.

Officials in Hohhot, the capital city of Inner Mongolia that was sealed off in early October to contain an outbreak, said at a briefing Saturday that all those under quarantine for being the close contacts of Covid close contacts will be released, according to a report by the official Xinhua news agency. But they said high-risk areas can be "broadened moderately" when there is wide community spread or the risk is unclear.

Sanya in the southern island of Hainan canceled a citywide testing scheduled for Saturday, and instead asked residents to make their own arrangements to get tested once every three days, according to a notice posted by the local government late Friday. Fuzhou in the southeastern province of Fujian suspended daily mass testings in five districts for four days from Saturday, according to an official notice.

China reported that new local cases rose to 11,323 for Friday, after daily infections climbed above 10,000 for the first time since April on the previous day. Much of the surge came from the southern metropolis Guangzhou, where new cases jumped to 3,180 from 2,583 on Thursday. Chongqing in southwestern China reported 1,240 new infections, up from 782.

Many local governments also heeded the latest instruction to recategorize "high-risk" areas that are placed under more stringent mobility curbs. The national guideline asked local authorities to narrow the scope of high-risk areas to resident units or blocks, and to remove the "medium" risk category.

Zhengzhou in central China, for example, released an updated list of high-risk areas, many of which were narrowed to specific building units. It wasn't immediately clear whether residents in areas that are no longer categorized as high or medium risk were already released from quarantine.

It's unclear yet whether curbs are eased in the city's Foxconn Technology Group plant — known as 'iPhone City' — in an area classified as "high risk." But the factory on Saturday posted a hiring advertisement on its verified social media account, luring workers with incentives worth as much as 3,000 yuan ($422.5) for some that would stay on their posts for 30 days.

Still, public venues in Beijing are tightening Covid control requirements as an outbreak continues to spread in the city. An increasing number of venues now require a negative Covid test result generated within the past 24 hours for visitors to enter. Beijing's new local infections were unchanged at 114 on Friday from a day earlier.

The city will follow requirements by the new measures to stop identifying close contacts of COVID close contacts and shorten the number of quarantine days, officials said at a press conference Saturday. Some restrictions on travelers stranded in Beijing will be lifted too, including curbs on their purchases of transport tickets, they said.

At the NHC briefing, officials reiterated local governments are banned from excessive disruption to people's lives in the name of COVID controls, saying medical services cannot be compromised and crucial transport links must remain running, even in the midst of outbreaks.