A 'tripledemic' of flu, RSV and COVID is feared in California 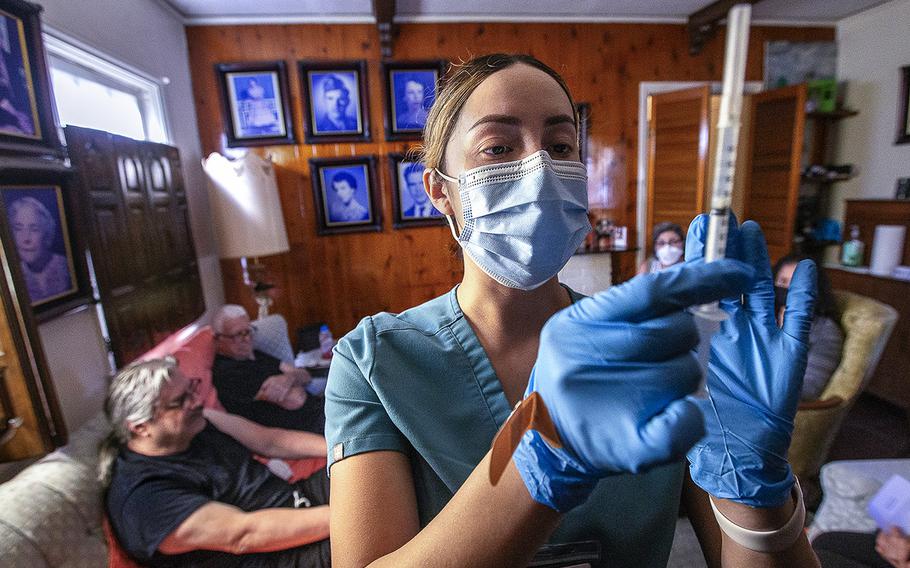 Licensed vocational nurse Angela Tapia prepares a dose of the Moderna COVID-19 booster vaccine at the Los Angeles home of Louis Salazar Jr., 64, left, and his father, Louis Salazar Sr., 90. They both received the booster, along with Maria Salazar, 88. (Mel Melcon/Los Angeles Times/TNS)

LOS ANGELES (Tribune News Service) — A confluence of respiratory illnesses has some California officials warning of a possible triple threat that could strain health care systems.

Parts of the state are experiencing the earliest start of flu season in recent years, while respiratory syncytial virus — or RSV — is spreading widely and sending significant numbers of young children to the emergency room.

Casting a further shadow is the looming threat of COVID-19, which many health experts expect will rebound this fall and winter as more residents travel for the holidays and colder weather pushes activities indoors.

"We are potentially going into what people are calling a 'tripledemic,' or a 'tridemic,'" warned Orange County health officer Dr. Regina Chinsio-Kwong, who on Monday declared a health emergency amid a surge in RSV cases. The respiratory illness is the most common cause of pneumonia and inflammation of the airways among babies.

Warnings that circulation of another virus could exacerbate the challenges posed by COVID-19 are not new. In 2020, officials braced for a possible "twindemic" ahead of the typical flu season. And while a horrific COVID-19 surge did materialize, the flu fizzled out.

The following year played out much the same way: lots of COVID-19 but not too much in the way of flu.

However, this year's flu season has already begun — and is demonstrating a potency not seen in the pandemic era.

"We're seeing the highest influenza hospitalization rates going back a decade," Dr. José Romero, director of the U.S. Centers for Disease Control and Prevention's National Center for Immunization and Respiratory Diseases, said at a news briefing Friday. So far this flu season, there have been two pediatric flu-related deaths nationally.

San Diego County reported its first flu death of the season, a 55-year-old man who had underlying medical conditions and hadn't received a vaccine.

"It is still early in the flu season and we are already seeing cases spike, so we have reason to believe that the flu could be extremely disruptive this year," San Diego County Public Health Officer Dr. Wilma Wooten said last week.

Since October, 10 flu deaths and three RSV deaths have been identified by the California Department of Public Health, based on an analysis of death certificates. One RSV death occurred in a child.

"The amount of influenza we're seeing is increasing sharply," Los Angeles County health officer Dr. Muntu Davis said Tuesday. "This is the earliest start of the flu season we've experienced in the past five years."

Every flu season is different, and it's too soon to say whether this year's activity will pick up or peter out. It's also not clear whether RSV and flu could surge simultaneously or if the former will give way to the latter — an apparent trend in other parts of the country.

Regions where hospitals are suffering significant capacity strain are in New England, the mid-Atlantic, and Washington state, federal officials said Friday. RSV cases are increasing in most parts of the country outside of the South and the Rocky Mountains, where RSV may already have peaked and the flu is beginning to surge.

In the South, most of the positive flu specimens are of the Influenza A H3N2 variant, "which in the past have been associated with more severe seasons, especially for young children and older individuals," Romero said.

In California, RSV and flu activity is increasing statewide. The positivity rate for RSV — more than 15% — is at its highest for this time of year in at least the last six years. And flu activity is already considered high in San Diego, Orange, Imperial, Riverside and San Bernardino counties, according to the California Department of Public Health.

Both of Orange County's two primary children's hospitals are "operating at or beyond their capacity to care" for children with respiratory illness, with ER wait times of four to 12 hours, according to Chinsio-Kwong. She urged the public to take steps to help curb the spread of sickness.

"We want you to mask back up, at least to reduce the risk of getting sick or transmitting illness to others," Chinsio-Kwong said. She recommended masking "especially at schools, day cares, as long as you're 2 and up."

"We've done this for the last two years," she said. "And we know it works because we have seen a decline in respiratory illnesses, such as flu, as well as RSV, in the last two years with the use of these mitigation factors."

However, neither she nor other California health officials have suggested a return to widespread indoor mask mandates that were in place each of the last two winters. California ended its last statewide mask order in mid-February, and L.A. County ended its in early March.

Chinsio-Kwong said many people might base masking decisions on recommendations from the CDC, which hinge on a region's coronavirus case and hospitalization rates. But she recommended that people mask up again in public indoor places because of the other respiratory illnesses circulating.

Melanie Patterson, vice president of patient care services and chief nursing officer at Children's Health of Orange County, which operates the county's two children's hospitals, recommended residents "wear masks indoors and in crowded outdoor areas," get their COVID-19 and flu vaccines, stay home when they're sick and wash their hands often. While the coronavirus is primarily transmitted through the air, other respiratory viruses can also be spread by touching contaminated surfaces.

"This is not just about COVID anymore," she said.

Some pediatric infectious disease experts have suggested not taking newborns into large crowds.

Officials say the strong early circulation of the flu and RSV may be partly due to the fact that many people — particularly children — were not exposed to those diseases in the pandemic era, leaving more susceptible now.

"In the past two years, respiratory viral disease activity has been highly impacted by COVID-19, resulting in the circulation of other viruses often being atypical in nature. We suspect that many children are being exposed to some respiratory viruses now for the first time, having avoided these viruses during the height of the pandemic," Romero said.

While the coronavirus remains in somewhat of a lull statewide, recent data indicate transmission is no longer declining. L.A. County has recently seen a small increase in the average daily number of new cases.

For the seven-day period that ended Thursday, L.A. County reported 1,050 coronavirus cases a day, a 10% increase from the prior week. The apparent autumn low occurred during the week that ended Oct. 16, when the case rate was 869 cases a day.

On a per capita basis, L.A. County is reporting 73 cases a week for every 100,000 residents. A case rate of 100 or more is considered a high rate of transmission; L.A. County's current rate is considered substantial.

Los Angeles and Orange counties, like the rest of the state, also are reporting an increase in the coronavirus positivity rate.

"We are no longer seeing the steady decline in cases we've been reporting since July, and reported case counts appear to be plateauing since Oct. 16," Davis said. "Given that hospitalizations are a lagging indicator, we will continue to observe whether changes in case numbers have an impact on admission numbers."

Officials partly attribute the mildness of the last two flu seasons to infection-prevention measures implemented for the COVID-19 pandemic. However, the vast majority of those have been lifted and residents can now make individual decisions on whether to wear a face mask or otherwise alter their behavior.

"With the holidays around the corner, vaccination is your best protection against infection," Romero said.

Children typically have a higher percentage of emergency room visits blamed on flu-like illness compared to adolescents and adults. So while the percentages aren't out of the ordinary, "what is unusual is that we are seeing such high levels of children in the [emergency department] reporting influenza-like illness this early in the season," Davis said.

The share of L.A. County respiratory specimens testing positive for RSV in October — about 20% — is also at a five-year high. That's up from 6% to 7% last October, and dramatically higher than the 1% seen during the prior three Octobers.

"As with flu, we cannot predict whether or not this is an early peak or the start to a severe season. But we do know that RSV activity is unusually high for this time of year, and it does warrant precautions," Davis said.

The percentage of ER visits among young children related to RSV is also at at three-year high in L.A. County. County officials said this week they haven't yet seen any major increases in pediatric hospital bed occupancy — though they noted that could change, especially since many hospitals have few pediatric beds to begin with.

Children's Hospital Los Angeles said it has been able to admit patients but the capacity of its emergency room has been stretched because of RSV and other respiratory illnesses. The ER can be so strained at times that CHLA can't always accept transfers from other emergency departments, said its chief medical officer, Dr. James Stein.

Nearly 10% of L.A. County emergency room visits among children younger than 5 are related to RSV or acute bronchiolitis, a swelling of the airways typically caused by RSV. That's higher that at any time in the last three years, according to the county Department of Public Health.

Symptoms that merit a call or a visit to the doctor include difficulty breathing, persistent chest or stomach pain, significant vomiting or dehydration, sweating from a fever and severe weakness or muscle pain.

Additional signs of concern for children include a fever higher than 104 degrees; a lower, sustained fever paired with symptoms such as fast or labored breathing; a blue discoloration of the skin that may signify too little oxygen in the blood; a shortage of tears when crying, reduced urination or confusion; or greater irritability or not wanting to be held.

"Parents and caretakers should never hesitate to call their pediatrician if they have any concerns about their child's health. You know your child best. Trust your instincts, ask questions and seek care if you believe it's needed," L.A. County Public Health Director Barbara Ferrer said. "Please don't wait until symptoms are severe before accessing treatment and care."