National Guard could lose up to 14,000 soldiers in next two years because of COVID vaccine mandate 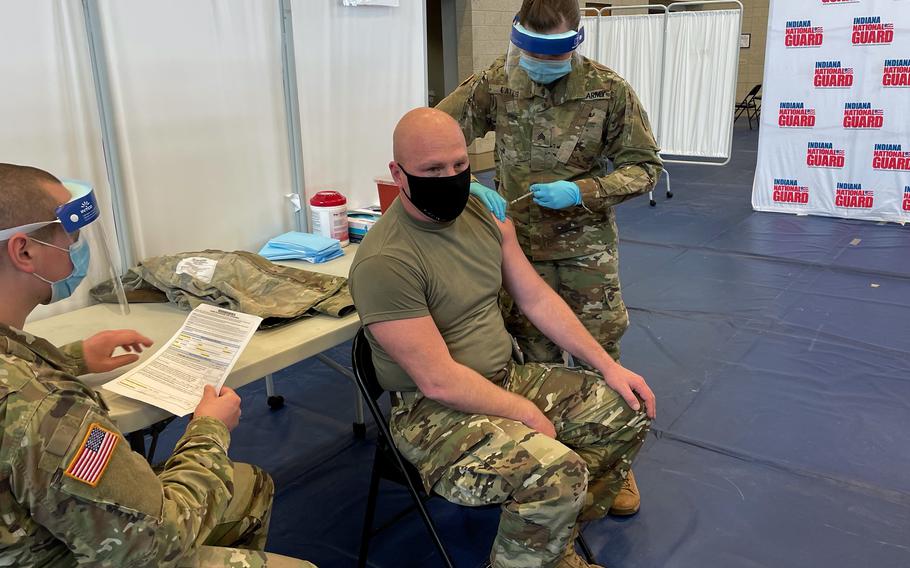 Indiana National Guard Sgt. Abigail Gates administers a COVID vaccination shot in December 2020 in Franklin, Indiana, to Sgt. 1st Class Ben Cripe. National Guard officials said Tuesday, Sept. 20, 2022, that they are preparing to discharge up to 14,000 soldiers in the next two years for refusing to take the coronavirus vaccine. (Jeff Lowry/National Guard)

The Army National Guard is preparing to discharge up to 14,000 soldiers in the next two years for refusing to take the coronavirus vaccine, adding increased pressure to the challenges the entire military faces with recruiting and retaining troops, service officials said Tuesday.

The Guard is waiting for the Army’s approval to begin separating soldiers who will not take the vaccine, which is mandated by the Defense Department, and have not applied for medical or religious waivers, Anson Smith, deputy chief of the Army National Guard Strength Maintenance Division, said during a call with reporters.

The Air National Guard has about 5,400 airmen who have not been vaccinated for the virus, though the service didn’t provide an estimate Tuesday on how many of those could be separated or when. Some of those refusing the vaccine could have pending waivers.

Smith said the Guard anticipates it will initially lose about 9,000 soldiers across the country in fiscal 2023, which begins Oct. 1. He said an additional 5,000 soldiers will be separated from the National Guard in fiscal 2024.

The Army National Guard is already operating at about 98% of its goal end-strength of 336,000, meaning any loss of soldiers could impact the force, said Gen. Daniel Hokanson, chief of the National Guard Bureau. The Air Guard has 97.2% of its authorized end strength of 108,000.

Hokanson said recruiters at every location that he visits have told him that they are facing “unprecedented” challenges in getting new enlistees.

“If you look at last year and the years prior to that, we have always met our authorized end-strength and it's probably due to a myriad of factors that affect all services,” he said.

The factors include a low propensity among young people to enlist in the military and only about 23% of them meet the requirements to do so, the general said. The military is also competing against a strong civilian job market that is luring away potential recruits.

To entice more recruits, Hokanson said the Guard is talking with lawmakers about offering health care to all members of the National Guard through the military’s Tricare system, which is estimated to cost about $719 million a year. Tricare is now only available to Guard members when they are on orders for a certain amount of time.

About 60,000 Guard members do not have any health care coverage, he said.

“When you look at overall, the fact that there is no health insurance provided to the National Guard folks, and we asked them to be ready at a moment's notice, ... we really need to make sure that they're medically healthy and ready and if they're injured that they've gotten that treated so that they can really respond when we ask them to,” Hokanson said. “Health care is absolutely critical to making that happen.”

The Guard is also considering a change in the way that educational resources are available to troops. When a Guard member fills out a federal grant and loan application, they cannot call themselves an independent student as an active-duty service member can. Independent means though the student is younger than 25, the person is separate from his or her parents or guardian. Not being able to use the independent status cuts into the amount of financial aid that the Guard member can receive.

“We just want to make sure that there's a level playing field with them and they can utilize all the benefits that they're entitled to,” Hokanson said.

He also said the Guard would like to bring back an old recruiting tool from the height of the Iraq and Afghanistan wars that allowed troops to receive a referral bonus for helping recruit a new member to the Guard.

“We need to make adjustments based on the current environment because, for the long term, our nation needs a National Guard the size that we are, or maybe even larger, to meet all the requirements that we have,” Hokanson said. “It's up to us to make sure that we fill our formations so that they're ready when our nation needs us.”