Fauci expected COVID to be 'behind us' after Biden's first year 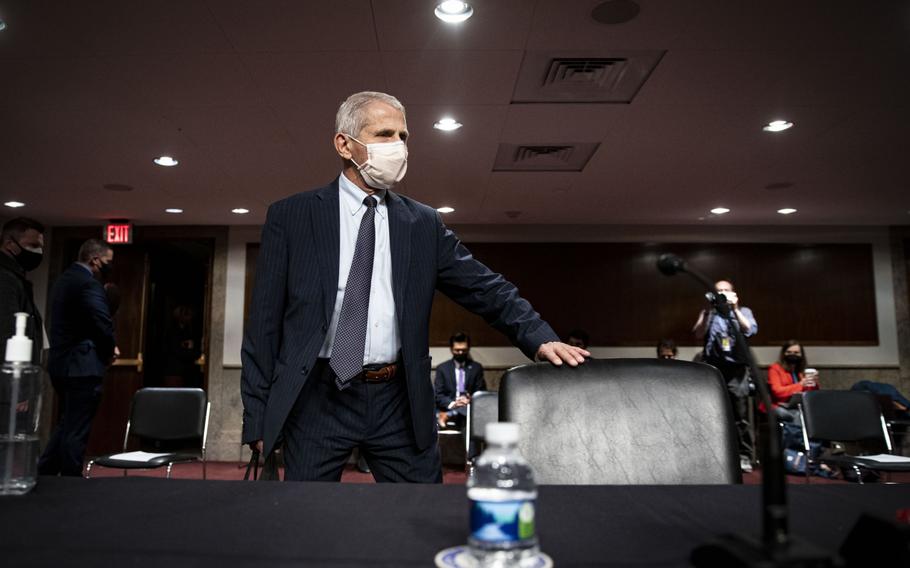 Anthony Fauci, director of the National Institute of Allergy and Infectious Diseases, arrives to a Senate Health, Education, Labor, and Pensions Committee hearing in Washington, D.C., on Nov. 4, 2021. (Al Drago/Bloomberg)

White House Chief Medical Adviser Anthony Fauci expected the U.S. would have moved past the COVID-19 pandemic after the first year of the Biden administration, but the disruption from the virus has lingered longer than the infectious disease expert anticipated.

"I thought after yet again another year we would have COVID behind us, but as it turns out that's not the case," he said in a taped interview for Bloomberg Television and Radio's Balance of Power with David Westin.

The infectious diseases expert spoke three days after announcing that he'll end more than a half-century career as a civil servant this December. Fauci has spent 38 years as director of the National Institute of Allergy and Infectious Diseases, advising seven presidents on outbreaks ranging from HIV to Ebola to COVID-19.

Fauci said he considered resigning at the end of the Trump administration since he was in good health and "passionate about doing other things outside of the confines of the government." But he agreed to stay on when President Joe Biden asked him to be a top adviser and expected then that his tenure would last about a year.

Fauci decried the political polarization that impeded America's response to COVID and said he would advise his successor — who has yet to be named — to stay out of politics.

"The country has come to a state where even politicians are saying things that are triggering thoughts of violence and harassment against me and my family, but that's just the state of our nation," he said. "I accept that. I don't like it."

The threats didn't play a role in his decision to step down, he said.

The U.S. needs to learn the lessons of COVID to be ready for future outbreaks, he said, calling the culture at the U.S. Centers for Disease Control and Prevention "not optimal" for responding to a global pandemic. "The good news is they now realize that," he said.

Fauci called a lack of transparency from China at the onset of the pandemic "unfortunate" and said that global cooperation will be essential to fighting future outbreaks.

The U.S. initially didn't appreciate how transmissible the virus was, that it spread through aerosols rather than just droplets, and that more than half the transmission occurred among people who had no symptoms, Fauci said.

"You have to be flexible enough and humble enough to realize that you don't know everything right at the beginning, and you've got to make decisions based on the data as it evolves," he said.

There were also parallels between Trump's early statements downplaying COVID and former President Ronald Reagan's silence on the HIV epidemic, but said there were important differences — namely that the U.S. quickly realized how serious COVID was, even as Trump asserted it would "go away like magic," Fauci said.

He said he announced his departure now because the nation has the countermeasures available to combat the virus.

"We've just got to get more people vaccinated and more people boosted," Fauci said. "But I think we're really on the threshold of getting COVID to the point where it is at a level where it is low enough that we can actually not have it disrupt the social order."

"I think that time is coming," he said. "I hope we get to that within the next few months."