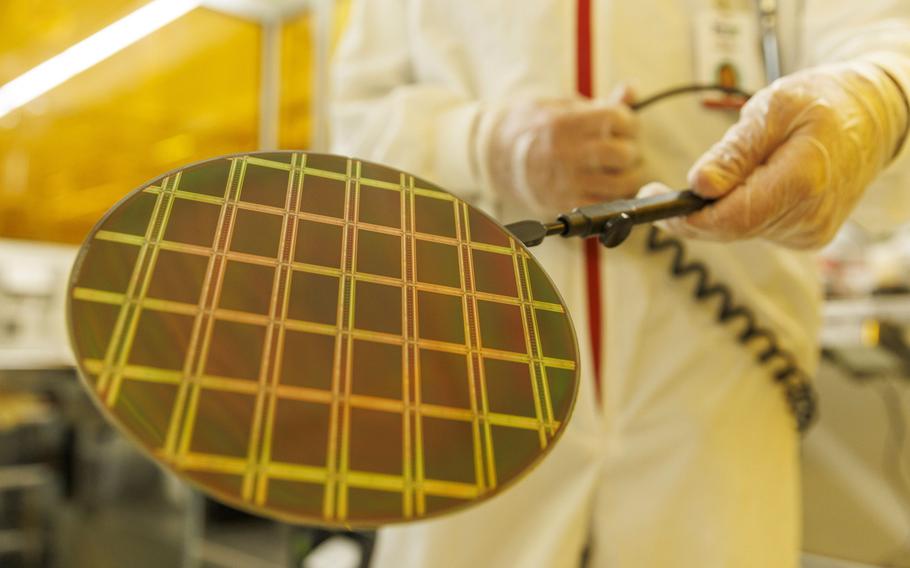 Technicians inspect a semiconductor wafer during testing in the cleanroom at the Tower Semiconductor Ltd. plant in Migdal HaEmek, Israel, on Feb. 28, 2022. (Kobi Wolf/Bloomberg)

Even in an industry famous for its roller-coaster cycles, chipmakers are bracing for a particularly severe shift in coming months, when a record-setting sales surge is threatening to give way to the worst decline in a decade or more.

The semiconductor market enjoyed a massive run-up in orders during the pandemic, sending sales and stock prices to new highs and triggering a global scramble to find enough supplies. There was hope in some circles that the boom could be sustained for several more years without a painful pullback, but chipmakers are now facing a familiar problem: growing inventory and shrinking demand.

It's a dilemma as old as the computing age. It takes years to build a chip plant, and they don't always come online when they're most needed. In the last few years, the problem was a lack of supply. As recently as this quarter, automakers and some other customers were complaining they still couldn't get enough electronic components.

But fortunes have turned swiftly for the biggest chipmakers. Companies like Nvidia Corp. are reporting more that 40% annual declines in their core businesses, while Micron Technology Inc. warns that demand is evaporating fast in many areas. This week, Chinese government data showed that output of integrated circuits plunged 17% in July after robust growth in 2021, reflecting supply chain shocks as well as a tapering in demand for lower-end chips from the world's biggest semiconductor market.

The treachery of the semiconductor cycle was driven home when President Joe Biden signed the $52 billion Chips and Science Act to subsidize domestic production -- on the very day that Micron, the U.S.'s biggest maker of memory chips, told investors demand was fading.

"It's sort of darkly humorous," said Sanford C. Bernstein analyst Stacy Rasgon. "The politicians are going to find out how quickly shortages can resolve themselves when the industry turns."

Personal computer makers, some of the biggest buyers of chips, were the harbinger of darker times. Desktop processor shipments dropped to their lowest level in nearly three decades in the second quarter, according to Mercury Research. Total processor shipments experienced their largest year-over-year falloff since about 1984.

It's a painful hangover following pandemic lockdowns, when the work-from-home trend spurred demand for PCs and other devices. Chipmakers had been rushing to keep up with a flood of orders, and supply-chain snags made customers even more desperate. Manufacturers of electronic devices were willing to buy chips at whatever price they could.

Now consumers are cutting down on big-ticket purchases, and chip buyers are following suit. That's created what the industry calls an "inventory correction." The last such downturn was in 2019, and they don't usually last long.

But this one is expected to be especially pronounced due to a weakening global economy. If an inventory correction happens at the same time the economy slides into recession, the industry won't get the speedy rebound it saw after the last slump.

"It's going to be a bad downturn," said Gus Richard, an analyst for Northland Securities.

Christopher Danely, a Citigroup analyst, expects the industry's drop to be the worst in at least a decade, and possibly two. Every company and every chip category is likely to suffer, he said.

One unusual factor this time is a broad push by governments to subsidize new factories and equipment, from the U.S. and Europe to China and Japan. Companies like Intel Corp. lobbied for passage of the Chips legislation, arguing the U.S. needed to be more competitive with Asian manufacturers. Now they're poised to start adding new capacity at a time of shaky demand.

There are 24 new construction projects of large-scale plants, known as fabs, getting underway in 2022, according to chip equipment industry association SEMI. That's well above the average of 20 that's been tracked by SEMI since 2014. Total spending on equipment will reach $117.5 billion in 2022, up 15% from the previous industry record, which was in in 2021. Next year that spending will increase to $120.8 billion, SEMI predicts.

The business of manufacturing chips has become increasingly precarious because of the massive upfront costs. Plants with a price tag of up to $20 billion need to be run flat-out 24 hours a day to bring a return in the few years before they become obsolete. The scale required to make that kind of investment has reduced the number of companies with leading-edge technology to fewer than five. And just three, Samsung Electronics Co., Taiwan Semiconductor Manufacturing Co. and Intel, account for the majority of production.

Those companies built their dominance by understanding the economics of the industry better than their rivals. They added production lines at just the right time and made their supply chains as efficient as possible.

But the push to build up chip production in the U.S. and Europe, providing an alternative to Asian manufacturing, could disrupt that drive toward efficiency.

The industry is "effectively building duplicate supply chains in the U.S. and Europe," said Fitch Ratings analyst Jason Pompeii. "This transition will result in short recurring periods of heightened revenue and cash flow volatility, particularly compared with the increasing efficiency the industry has enjoyed over past decades."

In the immediate term, the risk is "overinvesting in production capacity heading into an economic downturn," he said.

Chipmakers remain bullish about demand in the long run. Executives still expect the industry to hit $1 trillion in total revenue by the end of the decade. That means their massive factory build-out may well be worth it.

And in the end, no one really knows what will happen, said Bernstein's Rasgon. That's the story of the chip industry.

"Everybody is really bad at forecasting demand," he said. "They're too bullish, then they're too bearish."

Bloomberg's Peter Elstrom and Gao Yuan contributed to this report.