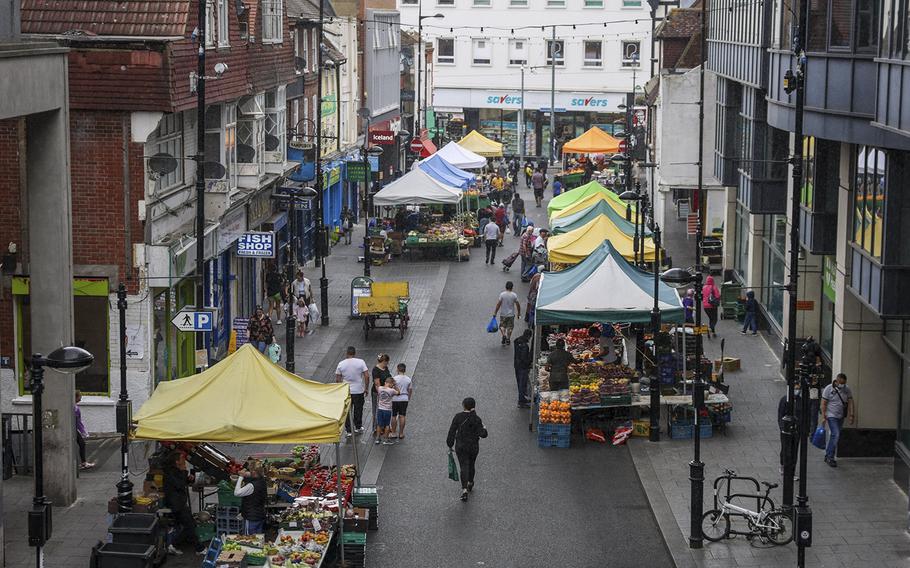 The U.K. economy shrank in the second quarter for the first time since the pandemic, driven by a decline in spending by households and on fighting the coronavirus.

Gross domestic product fell 0.1% after an 0.8% gain in the first quarter, the Office for National Statistics said Friday. A decline in Covid testing and vaccinations as well as slower retail sales and the first drop in household consumption in more than a year were the biggest drivers. Manufacturing also fell.

The results mark the biggest bump so far in the recovery from the pandemic. The Bank of England expects that inflation raging at a 40-year high will tip the economy into recession later this year.

"The U.K. economy is moving in an alarming direction," said David Bharier, Head of Research at the BCC. "While some consumer-facing industries have benefited from further withdrawals of Covid restrictions on travel, the retail sector saw a 1% decline in the quarter, reflecting the unprecedented pressures from inflation and global supply chain disruption."

While the outlook is for a rebound in the current quarter as the impact of the holiday unwinds, policymakers are concerned about what lies ahead. Soaring inflation and further rises in energy bill are setting up a difficult task for the winner of the race to replace Boris Johnson as prime minister.

"The economy has started a difficult period on a weak footing," said James Smith, Research Director at the Resolution Foundation, "The outlook is bleak. The first priority for the new prime minister will be to provide further targeted support to low-and-middle income households who will be worst affected by the stagflation that already seems to be taking hold."

The figure for June alone showed a 0.6% decline, mainly because of an extra holiday to mark the Queen's jubilee. That was half the drop expected, but May's figure was also revised down.

"Health was the biggest reason the economy contracted as both the test and trace and vaccine programs were wound down, while many retailers also had a tough quarter," said Darren Morgan, the director of economic statistics at the ONS, said Friday. "These were partially offset by growth in hotels, bars, hairdressers and outdoor events."

Separate figures showed the overall trade deficit in goods and services widened by £2 billion to a record £27.9 billion n the second quarter. Exports rose 2.4%, half the pace economists had expected, and imports fell 1.5%. That partly reflects border friction with the European Union after Britain's exit from the bloc.

"This data shows the risks of weakening, instead of stabilizing, our trade relations with the EU," said William Bain, head of trade policy at the BCC.

The quarterly GDP reading was a notch stronger than the 0.2% contraction anticipated by both economists the BOE. It's unlikely to shift the central bank away from further interest-rate hikes to control inflation.

Officials have already raised the key rate to 1.75%, from 0.1% in December, and markets are close to pricing in another half-point rise in September. After the data, wagers on the pace of BOE tightening edged up slightly, and traders are now pricing in a further 150 basis points of hikes by May 2023.

On Wednesday, Bank of England Chief Economist Huw Pill acknowledged that hiking interest rates to fight inflation will slow growth but argued that it's necessary to stabilize the economy over the long term.

"I know that times are tough and people will be concerned about rising prices and slowing growth, and that's why I'm determined to work with the Bank of England to get inflation under control and grow the economy," said Chancellor of the Exchequer Nadhim Zahawi.