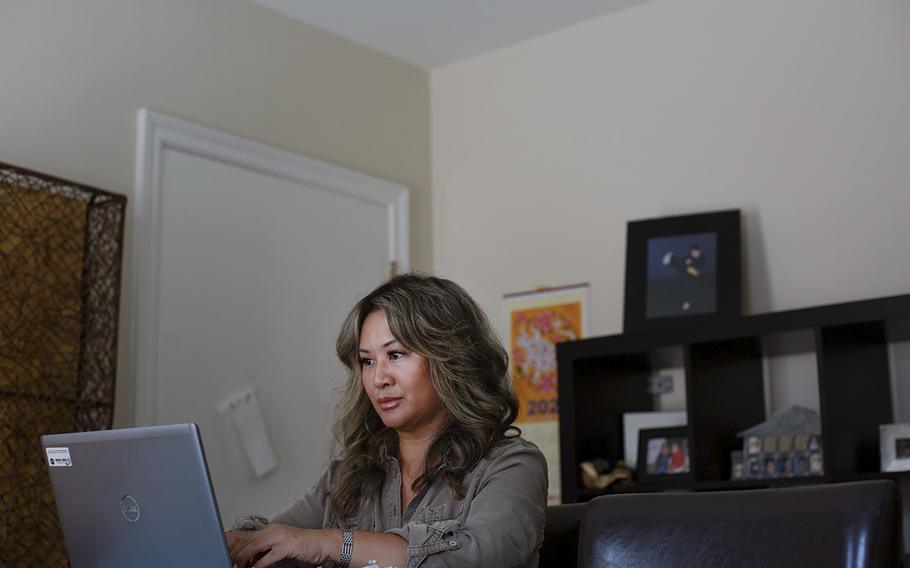 Maureen Calderon, a contact tracer for the L.A. County Department of Public Health, poses for a portrait in her home on Aug. 30, 2021, in Glendora, California. (Madeleine Hordinski/Los Angeles Times/TNS)

LOS ANGELES (Tribune News Service) — After Julianne Cline went out and got tested for COVID-19 this June, text messages and voicemails soon piled up from Los Angeles County contact tracers who wanted to talk to her.

Cline, 32, ignored them. She had been sick for days, and by the time she roused herself from bed to get officially tested, it seemed like "by the time they would have done any contact tracing, it would have been so long that those folks would have likely already gotten sick," the Manhattan Beach resident said.

Besides, she said, "I just didn't feel comfortable sharing my personal experience with the county."

As the pandemic has dragged on, L.A. County contact tracers have struggled to reach and interview people with COVID. In January, amid a crush of cases driven by the omicron variant, there were weeks when contact tracers were reaching and interviewing less than 10% of their assigned cases, county data show.

This summer, that number has stagnated below 30% in recent weeks — better than during the winter surge, but far below the success rates seen for L.A. County contact tracers earlier in the pandemic. And even when they have coaxed people to be interviewed, few of those phone calls led to additional conversations with others who they might have exposed, county statistics show.

Many more COVID cases are probably never being assigned to contact tracers at all, as many Angelenos rely on home tests that are never reported to the county.

Cline, for instance, had already tested positive on a home test days before she decided to confirm her case with a PCR test. At the University of Washington, researchers have estimated that fewer than 14% of positive cases across the United States are being detected and reported in official counts.

The end result is that only a fraction of COVID cases are being traced with phone calls to alert others and try to prevent more infections.

Experts say that contact tracing, long valued as a tool to quash the spread of viruses, has become an increasingly Sisyphean task in the face of rampant COVID infections, ever-more-contagious subvariants, and an exhausted public.

Contact tracing "is not really making the impact that it did at one point," said Adriane Casalotti, chief of government and public affairs with the National Assn. of County and City Health Officials. "With communities broadly reopened, it's very difficult to say how many contacts you had, and even if you can say that, you may have 20 or 30 or 40 contacts. ... The logistics of actually contacting those people is very difficult. There's not enough time in the day."

Newer variants appear to have had a shorter periodbefore symptoms arise and have spread more easily.

"It really shortens the amount of time that you have to get a hold of somebody," said Richard S. Garfein, professor at the UC San Diego Herbert Wertheim School of Public Health and Human Longevity Science. "Having cases be willing to talk to a case investigator and identify who their contacts are — and then being able to turn around and notify those contacts within 24 to 48 hours — is becoming really challenging."

In March 2020, the thinking was "this is a brand-new pandemic and we can hopefully stop it in its tracks, or blunt the impact and buy people time from spreading it further until we get a vaccine," said Andrew Noymer, associate professor of population health and disease prevention at UC Irvine.

Now, "I just don't see that we're going to contact trace our way out of this," Noymer said, especially as people have kept mingling but stopped wearing masks. He argued that the time and money should instead be devoted to other efforts, such as expanding PCR testing for the coronavirus, or redeploying contact tracers to track down monkeypox.

Earlier this year, the Centers for Disease Control and Prevention stopped recommending universal contact tracing for COVID-19, instead urging health departments to focus such efforts on high-risk settings such as long-term care facilities and jails.

Many cities have halted or pared back their efforts: Washington, D.C., laid off workers in June, putting an official end to its coronavirus contact tracing program, the Washington Post reported. New York City said it was ending its main program this spring.

At one point, L.A. County had enlisted roughly 2,800 contact tracers to find people who had tested positive and reach out to contacts who they might have exposed. By July, the county had roughly 100 staffers dedicated to contact tracing for COVID-19 — a fraction of the work force it once devoted to the effort.

The L.A. County Public Health Department said that its "limited resources (are) being focused on other strategies, including vaccines and therapeutics, that were not available earlier in the pandemic." Its contact tracers are now giving priority to cases among elderly people and those in "high risk" ZIP codes, a spokesperson said.

It has also started sending out an online interview by cellphone and email to allow people "to complete the case interview at their own pace and on their own time," the department said.

Experts said that monkeypox may be better suited to contact tracing than COVID because it is harder to transmit, is at lower numbers, and has a longer incubation period.

Alexander Morgan, who worked up until recently as a contact tracer through an L.A. County contractor, was dismayed that the county had cut back on the number of contact tracers for COVID as case numbers remain high.

"It doesn't make any sense," Morgan said. "You want experienced contact tracers during a surge. It's like a hospital gutting their staff."

Morgan said that in the winter, as cases piled up, contact tracers made fewer attempts to reach people before abandoning those cases. At one point in January, L.A. County contact tracers were only phoning about a quarter of their assigned cases within a day, county data show.

By July, contact tracers were again reaching out to the vast majority of their assigned cases within a day, according to county figures. But the majority of those attempts were not ending with a successful interview. Morgan said that many people he had dialed would say, "I don't have time for this."

Cline, the Manhattan Beach resident who ignored calls from contact tracers, said that at one point she started getting text messages offering her gift cards if she called them back. That only made her more skeptical. "I was like, 'Is this a scam?'" she said.

It wasn't: The county Department of Public Health said it is, in fact, offering gift cards through its contact tracing program. Garfein said that more than two years into the pandemic, "unfortunately, I think the public is burned out — and I don't know how to get it back."

Even when contact tracers do reach people who tested positive for the coronavirus, the trail often runs cold after that.

In a recent week in July, L.A. County contact tracers were assigned nearly 24,000 cases; successfully interviewed fewer than 5,000 of those people; identified 466 contacts from their calls and ultimately interviewed only 62 of those contacts, according to county data.

Even if relatively few people are reached, contact tracing can have other benefits, health officials have pointed out. Besides preventing the spread of cases, the phone calls can connect people to county assistance and encourage vaccinations and booster shots.

"Any contact tracing is good contact tracing — as long as the resources are not being taken from other things that are more effective," said Dr. John Swartzberg, a clinical professor emeritus at UC Berkeley School of Public Health. Right now, "there's just so much COVID that contact tracing is playing a minor role."

But "contact tracing can be incredibly valuable at keeping us at a very low level" when cases have fallen, Swartzberg said. And if public health departments give up on such programs when cases are overwhelming, it can be difficult to reestablish them when contact tracing could be more effective, Swartzberg argued.

"Dismantling the infrastructure for being able to effectively do contact tracing does not serve public health at all," said Dr. George Rutherford, an epidemiology professor at UC San Francisco. In recent decades, "public health has been systematically dismantled and underresourced. We paid the price during COVID. We don't want to pay the price again."

Rutherford added that although the incubation period for the latest variants is short, making it tougher to reach people before infections spread, such calls can also alert people who might have been exposed to get tested and treated more promptly. If 80-year-olds have been exposed, "you want to start them on Paxlovid if they're positive," Rutherford said.

"There are probably certain situations in which it's highly warranted — like a nursing home — and others like a rock concert or walking around downtown Los Angeles where you couldn't name your contacts anyway," Rutherford said.

Dr. Christopher Longhurst, chief medical officer for UC San Diego Health, said that another tool — anonymous notifications of COVID exposures through a smartphone app — can continue to help control infections by alerting strangers who spent time unmasked around someone who tested positive.

The CA Notify app, promoted by the California Department of Public Health, is now estimated to have 7.5 million active users and is notifying an average of five people every time someone reports that they tested positive, said Longhurst, who has helped manage and assess the system.

The results are still being evaluated, but "we're clearly helping to prevent hundreds of thousands of infections," Longhurst said.

Cline said she hadn't activated any app to alert people who might have been around her while she was infected.

"If I were asked to share all the places I had been and all the people I'd seen — there would be likely hundreds that could have passed by me," she said. "We're not in a place anymore where your one interaction a week may have been with just four people."