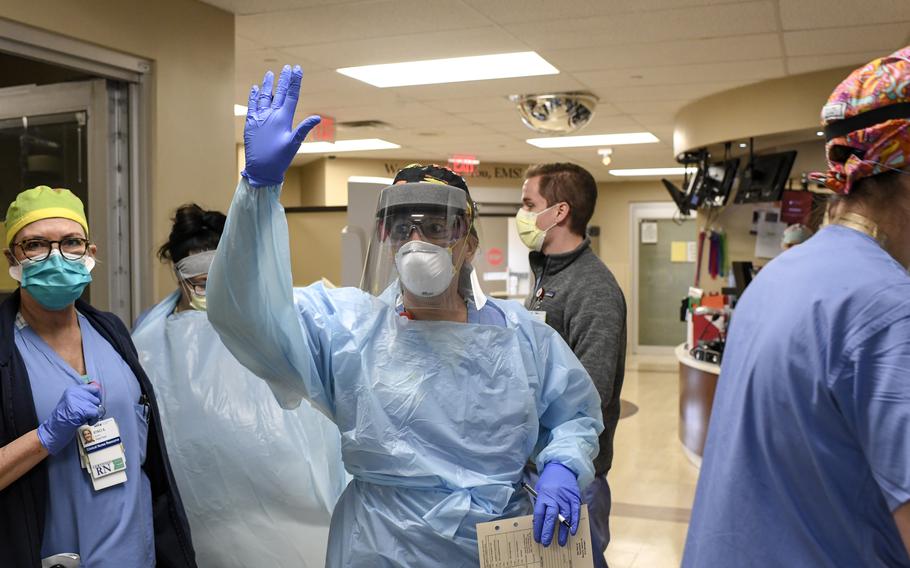 An emergency room team member gets teammates ready for the arrival of a patient at the Medical Center of Aurora on Wednesday, April 22, 2020, Colorado. (AAron Ontiveroz/The Denver Post/TNS)

DENVER (Tribune News Service) — Colorado's COVID-19 hospitalizations remain stuck in the same rough zone they've hovered in for the past six weeks, and it's not clear why they aren't dropping as other measures of the virus's spread improve.

According to the Colorado Department of Public Health and Environment, 313 people were hospitalized for COVID-19 as of Tuesday afternoon, which was a slight increase from 304 at the same time last week. The number of people receiving hospital care for the virus has fluctuated between 300 and 325 since June 14.

Normally, hospitalizations have started to drop about one week after cases began falling, said Talia Quandelacy, an assistant professor of epidemiology at the Colorado School of Public Health. But both cases and the percentage of tests coming back positive have been falling for about two weeks, and hospitalizations are still stuck, she said.

"You would think you would start to see this decline," she said.

The percentage of tests coming back positive has been trending down since mid-July. At an average 10.6% over the last week, though, it's still high enough to suggest significant numbers of cases aren't being found.

Cases are also slowly dropping, though those numbers are less reliable than in the past, because so many people aren't getting tested or are testing at home and not reporting the results. The state health department recorded 11,323 new cases in the week ending Sunday, down from 12,506 in the previous week.

Nationwide, reported cases are roughly flat, but hospitalizations have continued to rise slowly. An average of 43,000 people were hospitalized with COVID-19 nationwide each day over the last week, according to data from The New York Times.

It's possible that the fact that the state only reports hospitalizations once a week is obscuring a different pattern, Quandelacy said. So far, there's nothing to suggest the newly dominant BA.5 variant is more likely to put people in the hospital than previous versions of omicron, she said.

The state health department reported that BA.5 was found in about 62% of sequenced samples as of July 3. (It revised the previous week's estimate down to about 60% from 64%.) The Centers for Disease Control and Prevention estimate BA.5 accounts for about 82% of cases nationwide.

Some other measures in Colorado didn't point to an improving situation. The number of outbreaks considered active increased to 390 on Wednesday, from 369 a week earlier. The state only counts outbreaks in residential medical buildings, such as nursing homes, correctional facilities, child care centers, homeless shelters and overnight camps.

The CDC listed 17 Colorado counties as being at high risk from the virus: Arapahoe, Boulder, Chaffee, Garfield, Hinsdale, Huefano, Lake, Larimer, Mesa, Ouray, Pitkin, Pueblo, Rio Blanco, Routt, San Juan, San Miguel and Summit. The CDC advises wearing masks in public in counties at the high level, which had at least 200 cases for every 100,000 people and increasing COVID-19 hospitalizations.

The virus's prevalence is still "fairly high," and it's not clear what will happen in the near future, Quandelacy said.

In 2020 and 2021, Colorado saw waves in the fall, which is typically when respiratory viruses start spreading more widely. But much remains unknown about which variants will be circulating, and how good they'll be at evading immunity from vaccines and recent infections, she said.

"That will be something to watch," she said.