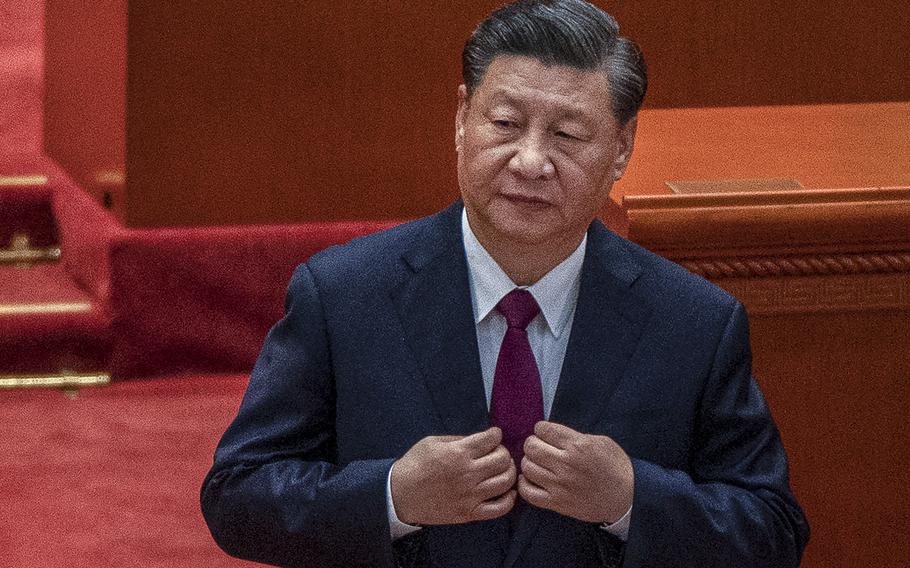 Chinese President Xi Jinping adjusts his jacket during a ceremony at the Great Hall of the People on April 8, 2022, in Beijing. (Kevin Frayer/Getty Images/TNS)

(Tribune News Service) — China said all its leaders received locally made COVID-19 shots, the first time a confirmation was made in the absence of a vaccine mandate for the country with the world's strictest controls against the virus.

The Chinese leadership is "highly confident" in domestic vaccines, National Health Commission official Zeng Yixin said at a briefing on Saturday. The department also addressed concerns surrounding the shots, saying the vaccines won't trigger illnesses such as leukemia and diabetes.

The Foreign Ministry had previously refused to comment on President Xi Jinping's vaccination status, in contrast with leaders such as President Joe Biden and Saudi Crown Prince Mohammed bin Salman, who both got vaccinated on camera in 2020. Xi's statements on vaccines have focused on demands to make them a "global public good," and advances in science, rather calls for the broader population at home to take them.

While close to 90% of China's total population are fully vaccinated, the group above 80 years old has lagged. Only about 61% of those in that category have received two shots, compared with about 89% for people between the ages of 60 and 69, and 87% for those between 70 and 79.

The recalcitrance among the country's 267 million people over the age of 60 has become a factor in keeping China stuck in its isolationist COVID-zero strategy. It has make it difficult to fully relax the rules around mass testing, lockdowns and travel curbs, and has left the economy at a constant risk of disruption.

While officials are actively encouraging the elderly to take vaccines, concerns on the potential side effects including worsening some existing diseases, have kept many senior residents away. Still, the latest data have shown capitulation, with rates among those 80 and above climbing from 51% in March.

China's first attempt at a vaccine mandate was abruptly scrapped earlier this month within days of being announced by municipal officials in Beijing. The plan to stop people entering public venues without proof of vaccination sparked an outcry online, with Chinese social media users calling it an illegal cap on their freedoms and questioning how effective the vaccines were against immune-evasive variants.

Vaccine mandates have emerged as a surprise red line for the ruling Communist Party. The leadership has so far been unwilling to throw its political capital or the heft of the security state behind vaccines, despite trumpeting its supply of homegrown shots to other nations and having no road map for exiting COVID zero without full coverage. It's unclear if that's because Xi's government is unwilling to exercise its power or a lack of consensus about the efficacy of vaccines.

The number of local infections nationwide totaled 722 for Friday, including 594 asymptomatic cases, according to the National Health Commission. That's lower than the 880 local COVID cases reported on Thursday, though infections have been hovering near a two-month high.

About half of the cases on Friday came from the inland Gansu province, where capital Lanzhou went into lockdown days ago. New infections in Gansu fell by almost 200 from the day before.