'I'm over it.' Many in LA shrug off COVID-19 wave despite super-infectious subvariants 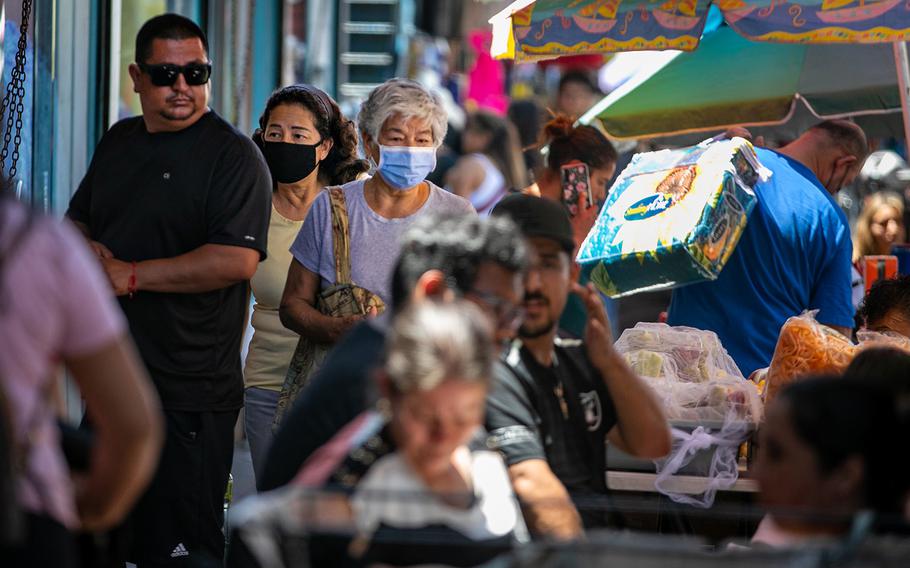 LOS ANGELES — There was a time during the pandemic when the scene at Westfield Valencia Town Center in Santa Clarita would have evoked gasps and much scolding.

As summertime temperatures flirted with 100 degrees this week, families and teenagers crowded into the indoor mall, soothed by its air conditioning. But there was nary a mask in sight, even though coronavirus infections are skyrocketing because of the ultra-infectious omicron subvariants BA.4 and BA.5.

"People are just exasperated and over it," said Hailey Jimenez, 21, who was working at a jewelry kiosk, unmasked. "I know I'm over it.

"I haven't really been paying attention too much to the numbers and all that, because I feel like it's just happening every couple of months: down, up, up, down, down."

Currently, the numbers are undoubtedly going up.

Officially, Los Angeles County has averaged 6,319 new coronavirus cases over the last week — nearly double the peak rate from last summer's delta surge — though health officials caution that number is a dramatic undercount because many people either test at home or not at all if their symptoms are mild.

The number of coronavirus-positive patients hospitalized in L.A. County as of Wednesday was 1,328 — up 44% from two weeks ago. But the majority of those patients — about 60%, according to public health officials — were hospitalized for other medical issues while testing positive for the disease.

Earlier in the pandemic, this kind of surge might have elicited widespread fear and anxiety in Los Angeles County, which has been more cautious with virus restrictions than most of the country.

But this time around, many are shrugging their shoulders.

The virus — which is widespread and overwhelmingly causing mild illness right now — simply does not scare people like it used to.

So many people are getting infected that the "fear of the unknown" is fading, Dr. Peter Chin-Hong, an infectious-diseases expert at UC San Francisco, said in an interview.

"You get it yourself and know tons of people who got it, and you fear it less," he said.

Chin-Hong said there is a palpable disconnect between alarmed scientists and health officials focused solely on the infectiousness and mutations of the virus and a public that is increasingly less concerned.

"Some people say, 'This is the worst ever!'" and that more variants "will come on board and this will never end. But it is getting better."

In Los Angeles County, public health officials are likely to reinstate an indoor mask mandate by the end of this month because the county is now in the "high" COVID-19 community level as defined by the U.S. Centers for Disease Control and Prevention when there are more than 10 coronavirus-positive hospitalizations per 100,000 people over seven days.

"While we are not seeing a sharp increase in severe disease at the present time, the pandemic continues to be a serious public health threat, which is why it is imperative that the public continue to take precautions to protect not only themselves, but their loved ones, neighbors, and the people they interact with during their daily lives," the L.A. County Department of Health Services said in a statement.

L.A. County would be the only county in California with a mask mandate, even though most counties are in the CDC's high community level. Alameda County reenacted a mandate earlier this summer, only to rescind it three weeks later, with officials saying case counts and hospitalizations had stabilized.

Dr. Robert Kim-Farley, an epidemiologist and infectious-diseases expert at UCLA, told The Times that "we are in a much better situation today than we were at the beginning of the pandemic" because vaccines are effective at preventing severe disease and death.

But super-contagious new omicron subvariants are causing more breakthrough infections in vaccinated and boosted people than did previous versions of the virus, and masks are one of the tried-and-true tools for reducing transmission, he said.

It's still important to bring down case numbers, he said, to protect vulnerable people such as the elderly and those with compromised immune systems.

"What we need to do is have a mindset, or social norm, that we are going to expect somewhat of a roller-coaster ride as new variants arise and sweep through the population," Kim-Farley said.

"We can go back to more business as usual, but when rates are high, we should all do our part in reducing transmission."

But many people say that they have already done their part, by getting vaccinated and taking precautions, and that they can't stay on high alert forever.

The percentage of Americans who say they are concerned about being hospitalized for COVID-19 has fallen to its lowest level since the Pew Research Center began asking about it early in the pandemic.

And COVID-19 deaths both worldwide and in the United States are at some of the lowest levels of the pandemic.

Dr. Monica Gandhi, an infectious-diseases expert at UC San Francisco, told The Times it's not surprising — and not inappropriate — for the public to be more relaxed.

"We're in a good phase with COVID, and that is a wonderful victory with immunity," Gandhi said. "It is OK to be happy about increasing population immunity.

"I just keep tweeting that we have low rates of severe disease, and people might be mad at me, but it's just the truth. It's a good thing."

Gandhi said the public is savvy and realizes hospitals and intensive care units are not overburdened by COVID-19 like they once were.

"For two years straight, Californians wore masks inside. They got vaccinated at high rates. Many got boosted. The rates of severe disease are so decoupled from hospitalizations, and that's so obvious to the public," she said.

She called the new mask mandate a bad idea — especially if it can flip on and off with hospitalization numbers like a yo-yo — because it could further erode an already alarmingly low level of trust in public health officials.

Just because people are largely resuming their pre-pandemic activities with less fear does not mean they are reckless, she said.

The 69-year-old, who owns Discoteca y Novedades Tierra Caliente, a variety store in Huntington Park, has managed to not get infected this whole time.

But in the summer of 2020, her husband and son fell ill with COVID-19. They were quarantined for about a month, and she took refuge at her store, sleeping next to the cash register and taking showers with a bucket.

"I felt trapped and terrified" with "the two people I love most" sick at home, she said.

Espionza's store was closed for months when so-called nonessential businesses were shuttered. Since it has reopened, she's been frustrated by customers coughing and has offered masks to people not wearing them.

And yet, the virus has become part of everyday life. Things feel so much better now.

At Del Amo Fashion Center in Torrance, where about half the customers were masked, Myles Ferguson was hanging out with two friends — a rare weekday treat for a trio that works all the time.

Ferguson, 26, of South L.A., said the mall was not too crowded, so he did not wear a mask inside. He's comfortable going inside less-busy public places without one but always carries one and puts it on if there are too many people.

At this point, he doesn't want to get COVID-19 — it's a disruption to have to stay away from people and miss work — but he's not mortally afraid of it.

Ferguson is not vaccinated, but he said he assesses his risk and is sensible, wearing a mask in crowds, testing regularly for work, staying home when he's sick.

Ferguson works the front desk at a hotel in Santa Monica and, for two years, has had to deal with hostile customers refusing to wear masks.

A new mandate wouldn't bother him, he said, because he still has to wear a mask at work, and it's second nature now.

His friend Philaton Mooney, 22, of South L.A. said that as a young, healthy man, he is not afraid of getting severely ill.

He is not vaccinated either, but he is careful, even if he's more relaxed than he once was. He lives with his grandparents, both of whom are vaccinated and boosted, but are older and more vulnerable.

In Huntington Park, Julisa Carrillo said she has not stopped worrying.

"People don't understand that this pandemic is not over," she said as she waited for a bus on Pacific Boulevard, wearing a mask.

Carrillo got COVID-19 twice in 2020, before vaccines were available. Both times, she was hospitalized and put on a ventilator. Her lungs have never felt the same. She can't run; she's easily winded.

Carrillo had just come from a friend's house where everyone wore a mask inside. She is hopeful that a new mandate will bring cases down again.

"This is a virus that is hurting so many people," she said. "I myself don't feel safe."

Back at Westfield Valencia Town Center, Nicki Spravka was roaming the stores without a mask with a friend who did wear one.

"I go to school in Colorado, and basically for the past year people have been acting like it doesn't exist anymore," Spravka, 20, said of the virus. "I mean, I guess I care. But it feels like what we do isn't really going to affect it."

Infections, she said, are "still going to happen."