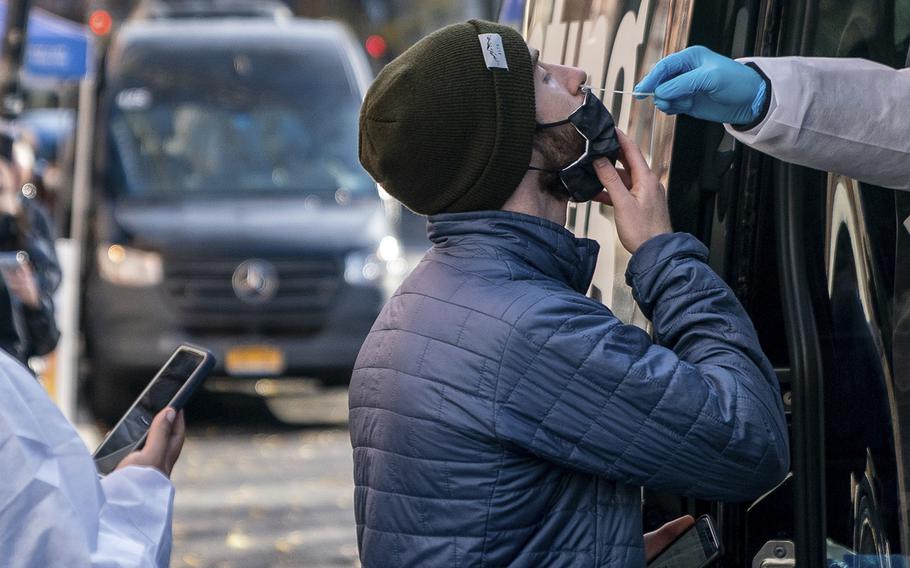 A person has a COVID-19 test administered at a walk-up testing site on Dec. 15, 2021, in New York City. The city’s public health system has been shutting down hundreds of testing sites as public attention to the virus fades, even as cases are surging nationwide in July 2022. (David Dee Delgado/Getty Images/TNS)

NEW YORK — New York City is scaling back on COVID-19 testing sites despite omicron subvariants that are driving a nationwide rise in new case and hospitalization rates.

The city's public health system has been shutting down hundreds of testing sites as public attention to the virus fades, according to its website. Meanwhile, the rate of positive results to total tests, an indicator of the speed of spread, rose to 15.4% this week, about four times what it was in April.

Hospitalizations and deaths, which can be a lagging indicator, have fallen slightly in recent weeks, according to reports from the city's health department. Mayor Eric Adams said Thursday that its hospitals aren't stressed and the city is in a "good, stable place."

"New York City and its Test & Trace Corps operate over 300 testing sites per day, including over 110 mobile testing sites and over 200 at-home test distribution sites," a city hall spokesperson said in a statement. "Our shift to mobile testing and at-home test distribution dramatically expands the number of sites available for New Yorkers to get tested, ensuring that fast, flexible, no-cost COVID-19 testing is available to all New Yorkers."

The omicron subvariants BA.4 and BA.5 are boosting infections, accounting for at least 70% of the total nationwide, according to the Centers for Disease Control and Prevention. While they're more transmissible and better able to evade immune defenses than earlier versions, people who have been vaccinated or previously infected are generally suffering low rates of severe illness, according to Dan Barouch, a virologist at Beth Israel Deaconess Medical Center in Boston.

"I think the vaccines essentially have done their job," said Barouch, who developed Johnson & Johnson's COVID shot, in an interview. "They have transformed a life-threatening disease into one that is, in most individuals, a mild illness."

Earlier this month, the Adams administration ended its use of a color-coded Covid alert system it implemented after he took office in January.

The city, which is focusing on the rate of new cases per 100,000 people instead of positivity numbers as a key indicator, is still urging New Yorkers to get boosted and mask up indoors. But, according to Adams, the alert system was "not good for the war that we're currently fighting."

Not everyone is applauding the move. Gregg Gonsalves, an infectious disease expert at the Yale School of Public Health, said it's short-sighted and ignores the reality of the ongoing outbreak.

"We've entered the see-no-evil, speak-no-evil, hear-no-evil phase of the pandemic: if we pretend it's not there, even stop counting it, we think it will go away," he said. "Sadly, planned ignorance is not bliss."

Confidence in the public health response appears mixed, according to a Pew Research survey showing that 43% of Americans say the country has correctly prioritized public health during the pandemic, while 34% say the outbreak has received too little attention.

Meanwhile, the virus's continued march across the US has brought varying responses from health officials. Texas has seen an overall uptick in Covid cases over the past two months, and hospitalizations for the disease reached their highest since March.

Austin city officials have been urging residents to wear N95 face masks indoors amid widespread transmission and declining immunity. In June, the city reversed plans to shut down a mass vaccination site as demand surged for children younger than 5.

In California, the daily positivity rate of 15% is the highest since January. Counties with high community levels of transmission include San Francisco, Sacramento and Ventura, according to the CDC.

While hospitalization rates in the Los Angeles County have remained relatively stable in the past month, BA.4 and BA.5 have become a cause for concern, Public Health Director Barbara Ferrer said in a Thursday briefing. Their ability to reinfect people who have been infected with other strains is particularly disturbing, she said.

Other new variants could present the threat of a return to widespread severe disease, Barouch said, so it is important to remain vigilant. That means continued testing and monitoring, said Yale's Gonsalves.

The coronavirus "will continue to infect Americans, disrupt lives, send people to the hospital, some to the morgue, leave some with lingering symptoms for months, if not years," he said. Stepping back from testing "isn't a plan, it's an abdication."