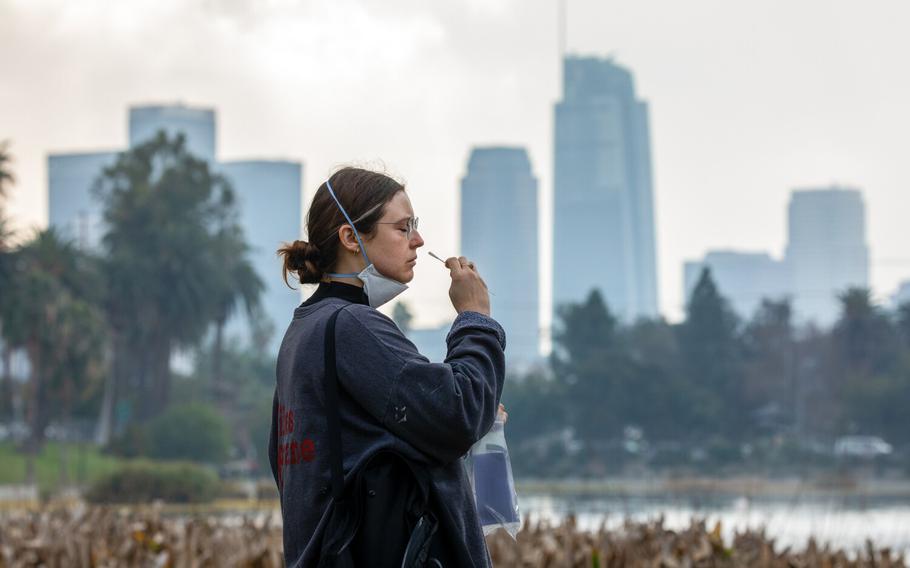 Lyndsey Marko takes a free PCR COVID-19 test in the Los Angeles area on Jan. 18, 2022. According to reports on Saturday, July 2, California officials are concerned about a spike in coronavirus infections involving omicron subvariants that are highly contagious. (Myung J. Chun/Los Angeles Times)

BA.4 and BA.5 are now believed to be responsible for most new infections nationwide. The strains are of particular concern because they are not only especially contagious but also capable of reinfecting those who have survived earlier omicron infection.

When it comes to BA.4 and BA.5, their "superpower is reinfection," said Dr. Peter Chin-Hong, a UC San Francisco infectious-disease expert.

"There also have been some concerning findings in laboratory studies, which found that BA.4 and BA.5 were better able to infect lung cells than the earlier BA.2 subvariant of omicron," she said.

BA.4 and BA.5 are likely to affect countries and regions differently, depending on the overall level of immunity and the number of older and medically vulnerable people. But "all of the information to date points to the need for us to prepare for the likelihood of significant transmission in the upcoming weeks," Ferrer said.

"Because of the uncertainty of how exactly these new subvariants will affect us in L.A. County, it does remain important to use all of the measures that work to reduce COVID-19 risk," such as vaccinations, masks, moving activities outdoors, increasing ventilation when indoors, testing and staying at home when sick, she said.

Though coronavirus reinfections have been possible throughout the pandemic, the risk has heightened of late.

"BA.4 and BA.5 are of special concern because of their apparent ability to cause reinfections in people who were already infected with other omicron subvariants," Ferrer said.

From early December, when omicron's presence was first detected in California, through the end of February, the state reported an average of about 14,325 people who were newly reinfected with the coronavirus per week, according to data from the California Department of Public Health.

That figure then receded along with the initial omicron wave, with an average of 2,315 weekly reinfections reported from early March through early May.

But the metric has since shot up — with 10,409 weekly reinfections reported from mid-May to mid-June. That timeline roughly corresponds with when BA.4 and BA.5 started to circulate more widely.

"It is likely that increases in the total number of reinfections is a result of changes in the epidemiology of COVID-19, trends in case rates and vaccination," as well as improvements in the realm of data compilation, including the implementation in February of automated processing for new reinfections, the California Department of Public Health said in a statement to the L.A. Times.

According to the latest figures from the U.S. Centers for Disease Control and Prevention, BA.4 and BA.5 comprised an estimated 52.3% of cases for the weeklong period that ended June 25. That's the first time the pair has represented a combined majority of estimated cases nationwide.

The previous week, the subvariants made up an estimated 37.4% of cases. The proportions are similar in the southwestern U.S., which includes California, Arizona, Nevada, Hawaii and U.S. Pacific territories.

Though the ultimate repercussions of the two strains remain to be seen, their apparent ability to reinfect people threatens to weaken one of the few guardrails for a pandemic-weary populace.

Previous waves have come to a close because the coronavirus hit a wall, stalling when enough people were vaccinated, had been infected or were altering their behavior to an extent that the virus was deprived of vulnerable hosts.

But in a world dominated by BA.4 and BA.5, those who have been infected with the coronavirus — even as recently as a few weeks ago — may not be adequately shielded.

"Reinfection risk is substantially increased due to the new spike mutations we are getting exposed to," Dr. Eric Topol, director of the Scripps Research Translational Institute in La Jolla, wrote in a recent blog post. The first omicron variant "induces a fairly weak, narrow immune response, which doesn't help with exposure to" the more recent omicron strains, he added.

Topol called BA.5 "the worst version of the virus that we've seen."

"It takes immune escape, already extensive, to the next level, and, as a function of that, enhanced transmissibility, well beyond omicron (BA.1) and other omicron family variants that we've seen," he wrote in another blog post. "You could say it's not so bad because there hasn't been a marked rise in hospitalizations and deaths as we saw with omicron, but that's only because we had such a striking adverse impact from omicron, for which there is at least some cross-immunity."

The shifting subvariant dynamic may help explain why the coronavirus is still transmitting at high levels across California, quashing hopes that the pandemic is over.

"I'm concerned because we are seeing more BA.4 and BA.5 in our population, and that could be why we're sort of treading water at such a high level of transmission," Dr. Paul Simon, chief science officer for the L.A. County Department of Public Health, said during a recent briefing.

As of data released Friday, California has recorded a 12% increase in coronavirus cases compared with mid-June, tallying an average of more than 16,900 per day over the last week, according to data compiled by the L.A. Times. On a per capita basis, that's 303 cases a week for every 100,000 residents.

A rate of 100 or more cases a week for every 100,000 residents is considered a high rate of transmission

Los Angeles County is reporting nearly 5,300 cases a day, for a weekly rate of 367 cases per 100,000 residents. That's the highest case rate since early February and represents a 20% week-over-week increase in cases, erasing improvements in the case rate recorded in mid-June.

That still-potent spread can be chalked up to several factors, including residents who have largely abandoned infection-prevention measures and returned to pre-pandemic habits, the emergence of ever-more-contagious strains and the waning of virus immunity.

It was comparatively easier to avoid last summer's delta variant or even the first omicron strain that struck after Thanksgiving than the more transmissible editions of omicron that have emerged since.

Dr. Abraar Karan, an infectious-disease expert at Stanford University, wondered whether Becerra's June bout of COVID-19 was caused by BA.4 or BA.5. On Twitter, Karan described how he contracted the coronavirus in January, likely with the first omicron variant, BA.1, but then got infected again in May, likely with BA.2.12.1.

"With more immune-evasive variants, that could be the case for many of us once again, and soon," Karan wrote.

Any infection — whether it's the first or a repeat occurrence — still poses potential health problems. Though much has been said about omicron's comparatively milder nature, it can still pack a punch.

Even if hospitalization is not required, COVID-19 can still cause miserable symptoms. And long COVID, in which ailments like fatigue, brain fog or difficulty breathing can persist for months or years, remains a risk after every infection, though it is probably reduced by getting up-to-date on vaccinations.

"It's prudent to remain careful despite the fall in hospitalizations and deaths in recent months," Dr. Robert Wachter, chair of UC San Francisco's Department of Medicine, wrote recently, adding that he has stopped dining at indoor public spaces amid high case rates in his city. "It's all about long COVID — both prolonged symptoms and the elevated long-term risk of [a heart attack], stroke, diabetes, and more."

It's a risk he's all too familiar with. His wife is still contending with symptoms weeks after she was initially infected.

"A healthy 64-year-old who has been vaccinated and boosted, she had an uneventful initial bout with the virus. Yet seven weeks later she continues to suffer from extreme exhaustion and feels as if her brain is working in slow motion," Wachter wrote in an op-ed.

As to whether BA.4 or BA.5 causes more serious illness than other members of the omicron family, the jury is still out.

Though the World Health Organization noted recently that current available evidence doesn't indicate a change in disease severity associated with either, the agency also said their growing prevalence "has coincided with a rise in cases" in several regions, with those increases leading to a surge in hospitalizations in some countries.

BA.5, Topol said, "led to a marked rise in hospitalizations in Portugal where it rapidly became dominant," and is having a similar effect in many European nations and Israel.

One major question is whether the potential rollout of an omicron-specific booster later this year will help. Given how much the variant has mutated in the last seven months, there are concerns such an offering may be relatively outdated by the time it's available.

It's ever more important, Topol said, to accelerate work on a new generation of vaccines, such as a nasal vaccine intended to better protect people from infection, and vaccines that can work against all coronavirus variants.